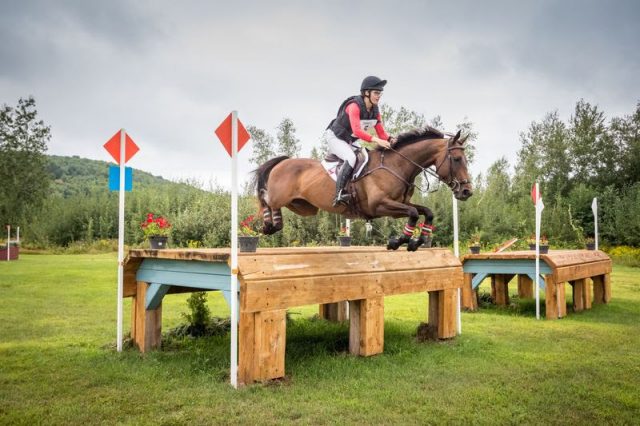 Brooke Massie (CAN) and Serendipity at the Bromont CCI-S Three Day Event in Bromont, Quebec. Photo by RedBayStock.com.

It’s one thing to make it around your first four-star cross country penalty free. It’s another to finish inside the time. But you’re going double clear in your CCI4*-S debut, you might as well go ahead and win the dang thing — That’s Brooke Massie’s motto, anyhow.

She leap frogged her way up the leaderboard with her own Serendipity, starting in 14th after dressage, then 10th after show jumping before finally landing on the very top of the class on a three-day result of 45.5.

Michael Nolan and SBT Good Guy cruised to an easy clear, picking up 13.6 time penalties for second place. He and  “Killer,” a 10-year-old Irish Sport Horse owned by Sue and Bob Martin, finished on a score of 47.9.

In their last run before Burghley, Dom Schramm and Bolytair B had a happy, confident clear with an additional 12.8 time penalties to finish on 49.5 points.

Lillian Heard and LCC Barnaby, who are also slated for a plane ticket to Burghley, went clear with 21.6 time penalties for sixth place on a score of 58.5.

Overnight leader Colleen Loach clinched the win in the CCI3*-S class, but swapped her lead horse. Vermont, a 7-year-old Hanoverian owned by Peter Barry, snagged the blue ribbon after producing the fastest clear round of the class, adding 8 time penalties for a final result of 41.1.

Alexa Gartenberg won the CCI3*-S U25 aboard Louis M. A clear trip with just 0.4 time penalties added gives them a final result of 42.7.

Calli Lipping and Wild Affair took top honors in the CCI2*-S U25 on a finishing score of 40. 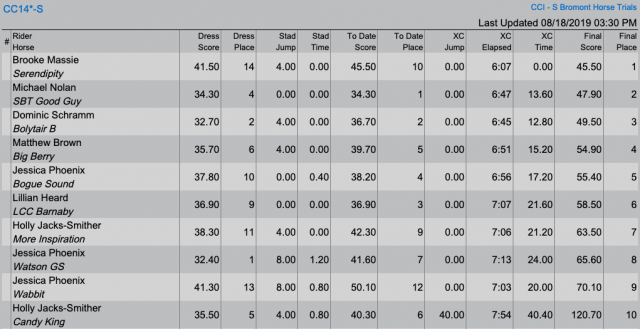