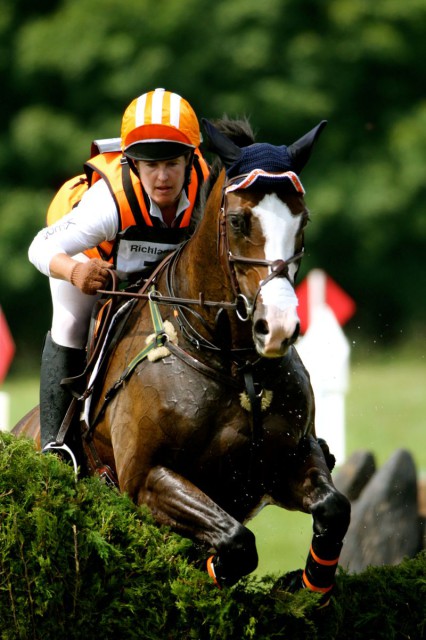 Five North Americans are entered to compete in a small 40-horse field at Les Etoiles de Pau CCI4* later this month in France. Our four Americans have all confirmed they are going: Lauren Kieffer and Veronica, Clark Montgomery and Universe, Erin Sylvester and No Boundaries, and Sharon White and Wundermaske.

Lauren and Veronica finished in second at Rolex Kentucky CCI4* only to have a last minute training accident keep them from competing at the World Equestrian Games prep trials at Great Meadow, later forcing their withdrawal as an alternate from the U.S. squad. But the mare has looked in good form since, most recently finishing fourth in Advanced at Plantation Field in their final prep run.

Universe is no stranger to Pau, having bounced around for an easy double clear cross country last year on his way to finishing 10th with Clark Montgomery. Though he had a very strong 2013, Clark and “Buzz” have struggled this season, retiring on cross country at Badminton, falling at Bramham CIC3* and picking up a stop in show jumping at Barbury before ultimately withdrawing.

Clark and Buzz cantered around an Open Intermediate division at Pontispool last month in preparation for Pau. While they’ve been weathering a rough season, we’d like to think they’re due a bit of good luck, and considering they’re success at Pau last year, the chinchillas are hoping fortune will favor them in France.

Erin Sylvester and No Boundaries haven’t competed overseas since completing Burghley in 2012, so this is an exciting trip for them. Though “Bucky” is somewhat renowned for his antics in the little white box, he’s been a very good boy this year — touch wood! — and has the potential to really shine at Pau.

Though they parted ways at Rolex earlier this season, Erin and Bucky have had a very consistent year overall in preparation for this event, finishing fourth in the CCI3* at Bromont and seventh in the CIC3* at Plantation Field. We think they’re primed for a good performance.

After losing his mind a bit in the dressage at Rolex earlier this year with Sharon White, Wundermaske has been in a desensitization boot camp of sorts to get him accustomed to the bigger atmospheres he’ll encounter at events like Kentucky and Pau. The potential is there for him to score very well on the flat, so if he can hold it together in France, he could definitely crack the 40s.

His issues in the little white box aside, “Patch” has been very consistent across the country this year, with the only blip on his record coming at Millbrook when Sharon bashed her knee against the jump that shall not be named, forcing her to retire. He made the time at Rolex and had just one rail down the next day, so he’s poised to play the dark horse in France.

Kathryn Robinson and Let It Bee return to Pau for a third time, having been eliminated in 2012 and 2013 in their prior attempts at a four-star. After being named to the Canadian World Equestrian Games squad only to be removed due to an eligibility issue, Kathryn has had something to prove this summer, finishing 10th in a big CIC3* class at Hartpury and ninth at Ballindenisk CIC3*.

You can check out the rest of the entry list below. William Fox-Pitt has three horses entered in last year’s winner Seacookie, Parklane Hawk and Oslo, and Andrew Nicholson has one horse, Qwanza, entered. With such a small field entered, it’s hard to bet against William taking the win again. 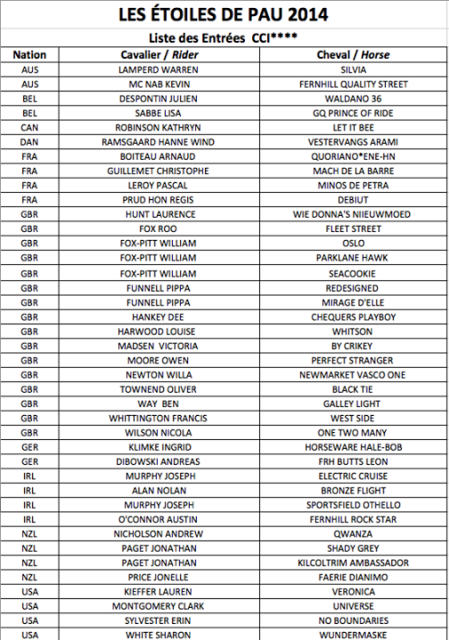