The start of CIC* cross country at Pine Top has been delayed 40 minutes to 1 p.m. EST as the organizers are scrambling to remove ice from the water complexes, which were totally frozen over this morning after overnight temperatures in Thomson, Georgia, dipped into the teens.

Here’s a video of course builder Rob Mobley driving over the second Advanced water complex to break up the ice so competitors can get into the water when they walk their courses today:

Check out the photos that have been surfacing on social media and keep checking live updates on Twitter @eventingnation. Leslie Threlkeld is on the grounds this weekend for EN and will be back later in the day with a full score update. In the meantime, be sure to follow her coverage on Twitter.

The start of CIC2* cross country has also been delayed and will now start at 2:30 p.m. EST. Stay tuned for much more from Pine Top, the official home of the North American Eventing Figure Skating Championships, and kudos to the organizers and grounds crew for all their hard work getting the course in perfect condition for the competitors!

I hope I get to see someone fall off into the water jump today! Not one of mine but someone. pic.twitter.com/KvnauWVY96 — Kyle & Jen Carter (@CarterEventing) February 20, 2015 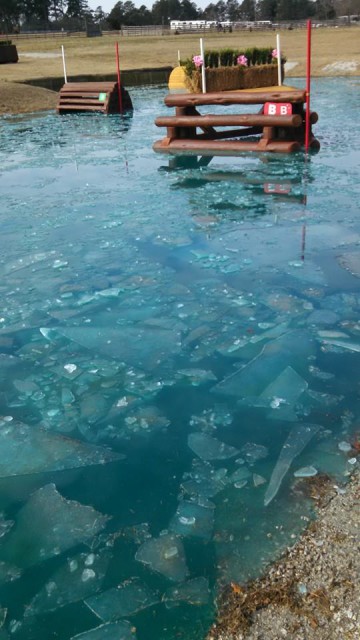