We were very sad to learn that three horses died last weekend at the Golden Button Challenge, a cross-country race near Tewkesbury, England, organized by the Ledbury Hunt that covers three miles and 25 obstacles, including ditches, brush and rail jumps. Sixty-four riders started the race, but only 39 finished.

The Golden Button Challenge was returning after a three-year hiatus and was patronized by multiple accomplished hunt, race and event riders. You can view helmet cam footage of the race here and video below.

One horse suffered a broken back after falling on course and was humanely euthanized by onsite veterinarians. Two others succumbed to what is believed to be cardiac episodes following the finish of the race. Overall, 39 out of 62 starters completed the race.

The Golden Button Challenge released a statement yesterday, saying the Ledbury Hunt examined the following aspects of the competition:

The horse that broke its back did so at a hedge and ditch fence that had an optional longer route. The vet team was able to euthanize the horse very soon after the fall.

“The Golden Button Challenge is an enormously popular rural event that has attracted a vast crowd and a maximum field of runners in each of the six runnings. It was accepted in advance that all owners and riders would ensure their horses were fit and ready for a three-mile gallop across country and were responsible for the welfare of their mounts during the event,” the organizers said.

“After considering all aspects of the event the organisers could find no cause for the sad loss of three horses. However, future entry forms will stress the need to ensure horses and riders are fit to compete in a test of this nature. The organisers would like to express their sincere sympathies to the riders/owners and grooms of the horses who did not return to their stables.”

EN has also spoke to one of the riders who lost her horse due to a cardiac episode after completing the race, which she said was “immensely well executed” and thanked the organizers for their hard work. She released the following statement and photo and asked that we not use her name: 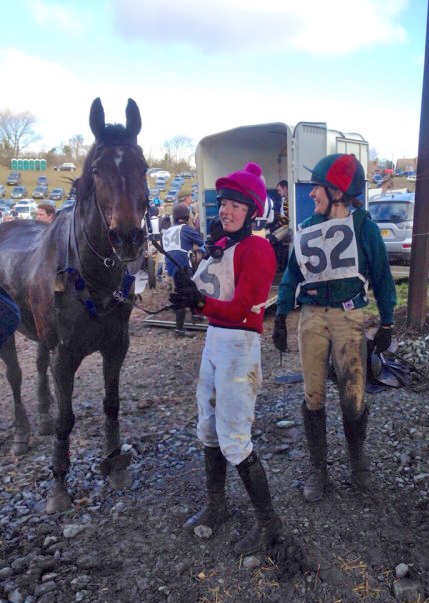 “I had a fantastic ride around on my superstar ex-Advanced eventer — he flew everything and loved every second. No one can doubt his fitness, as he probably finished more full of running than any other horse there that day. You should have seen him gallop up the last hill and wing the final fence — I couldn’t pull him up!

“But as some of you are aware, I sadly lost my superstar Georgie from a heart attack five or so minutes after he completed the course … but these things happen — if your time’s up, your time’s up — and, in my opinion, no better way to go. He was an old boy and had a great life, and I’m delighted he went out on a high doing what he loved. As you can see from the picture, he absolutely loved the game and was smiling with pricked ears posing for the camera literally seconds before he passed away.

“The Ledbury Hunt dealt with the situation as quickly and professionally as they could in the circumstances, and we could not be more grateful, and I hope that you will all join me in raising a glass tonight to the most outstanding horse and character I’ve ever had the pleasure of knowing. My one and only Georgiepone.”

Information on previous injuries or fatalities at past runnings of the Golden Button Challenge have not been released at this time; we will update this post if more information becomes available.

What do you think of the organizers’ response to the three horses fatalities, EN? Would you still support future runnings of the Golden Button Challenge? Or, do you agree with us that three horses are way too many to lose in one single sporting event?