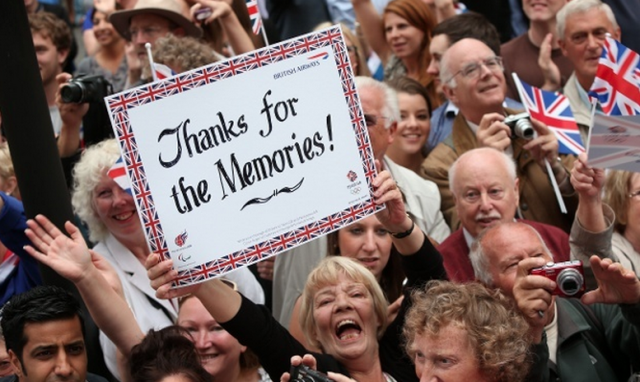 Hundreds of thousands of people line the streets of London during the athletes' parade following the 2012 Olympics. Photo by David Davies/AFP/Getty Images.

A busy week in Aiken ended last Friday with High Performance Owner’s Day, which started in the morning with the USEF High Performance training sessions at Stable View Farm, followed by a tour of Aiken’s most beautiful farms, including Phillip and Evie Dutton’s Red Oak Farm in Bridle Creek.

All the owners and riders eventually made their way to Fernanda Kellogg and Kirk Henckel’s FoxFrolic Farm for a reception that evening, where U.S. Chef d’Equipe David O’Connor and Will Connell, the new USEF Director of Sport Programs, spoke about the future of U.S. eventing.

Fernanda, a longtime owner and supporter for Boyd Martin, opened the night with a shout out to the Event Owner’s Task Force, which has helped to syndicate about 110 horses in the U.S. since the group began in 2008. “Something that was strange to begin with is now an ordinary part of the sport,” Fernanda said to much applause.

David then took the mic to explain the impetus for gathering all the owners and riders together in Aiken: “It is about celebrating the journey we’re trying to go on and a place we’re all trying to go to. We are well down that road — two years and a little bit more into this.

“There have been a lot of changes and a lot of really, really good momentum is coming on, and a lot of it is because of people like you who ended up making guys like that (pointing to Boyd). They really can’t do it without you. It takes a whole village to make this happen.

“The first year we did this, everyone was wondering ‘what is this going to be like?’ Now I actually get a real feel of excitement. I get excitement from the riders, from the people who have been on the journey with us. It’s pervading.

“You can feel it in the training sessions this year — a renewed sense of purpose. I think the riding is at a brand new level, which is exciting for me. I predicted earlier this year that this would be our breakout year. Once that happens, this train is full on running,” he said.

David then introduced Will Connell as our new USEF Director of Sport Programs: “Will was the architect of the British success in the last 15 years, really since Atlanta,” David said. “England changed the way they did things because of him, and now he’s come over to us.

“He’s a great plus to our system. The breadth of his knowledge and the scope of what he’s thinking is going to make all of us better. We’re looking forward to being under his thought process, and I can’t think of anybody in the world better suited to the job.”

‘A proponent of phase E’

Though Will oversees all USEF sport programs, he explained he does have a background in eventing: “I evented myself, very badly,” he said. “I was a leading proponent of phase E, the bar after cross country … I also hunted a lot, growing up in Northamptonshire. I followed people like Lucinda Green out hunting.”

Will served as chef d’equipe for the British Young Rider eventing team from 1997 to 2001 and was also a British Eventing steward, as well as deputy equestrian director of Olympia, the London International Horse Show.

In 2003, he took on the role of British Equestrian Federation performance director, which made him responsible for running the UK Sport-funded World Class Program for eventing, dressage, jumping and para-dressage.

But before all that, he served for 17 years with the British Army’s Royal Horse Artillery and was commanding officer of the King’s Troop RHA, which he said greatly shaped the way he ultimately approached the challenges that came later in his career.

“The troop is a very dedicated unit,” Will said. “You had departments of a certain expertise, from saddlers to farriers. My job was to bring those departments together. That’s what my job is now.”

In his new role here in the States, Will oversees eight international disciplines, nine national disciplines and 11 breeds recognized by the USEF. He also leads the USEF discipline directors and their staff, as well as serves as chef de mission at the FEI World Equestrian Games, Pan American Games and Olympic Games.

Just as there are five Olympic rings, Will said he applies five principles in his approach to this new role.

The first is talent: “talented riders, coaches, staff, physios, farriers, R&D — all of that you have to be the best in the world.”

The second is vision: “Unless you actually know where you want to go, how will you ever get there?” Will said this expands across all disciplines, which should be working together toward the mutual goal of getting on the podium.

The third is environment: “Unless you have a positive environment, a team will not win.”

The fifth is resource: “Without resource, whether it’s human or equine or finance, you’re not going to succeed in today’s sporting environment. That’s pretty simple.

“What you’re generating with the Event Owner’s Task Force is not just about resources. It’s also about impacting the other areas, whether it’s the vision or the talent, and I can’t commend you enough for what you have done. You’re ahead of the other nations in those terms.”

Will concluded his remarks with speaking about the 2012 London Olympics, where, under his guidance, British equestrian teams won team silver in eventing; individual gold and bronze, as well as team team gold, in dressage; team gold in show jumping; and team gold and 10 individual medals in para-dressage.

“London was a huge journey,” Will said. “One of the biggest things we did in the lead up was to study the home advantage and disadvantage. We studied the Americans running at Lexington in 2010. It was something I thought about every day from 2005 to 2012. When it was finished, the feeling of pride was enormous when you sat in those stands.”

After the Games, hundreds of thousands of people lined the streets of London for an athletes’ parade, which Will described as a very emotional occasion. British Airways passed out blank signs and markers for the parade goers to write messages for the athletes as they rode by on floats.

“Probably 70 percent of them just said, ‘Thank you,’ and that was very moving,” Will said. “In a high performance sporting environment, you live in a very insular world. But when you get it right and win in your own nation, it can fundamentally impact a country, and it did.”

Now another journey starts, he said: “When someone asks me where I want to be in 10 years, I want to be sitting here and speaking about how America won at least five medals in Bromont.”

To say there was thunderous applause as Will made that remark would be an understatement, and I’ve heard nothing but praise for his comments from the riders and owners ever since.

“Now the journey starts,” David said in closing the night. “We are already all excited about it, from the riders to the coaches to the staff. It’s a train that is running. We hope you all hop on board and come with us.”