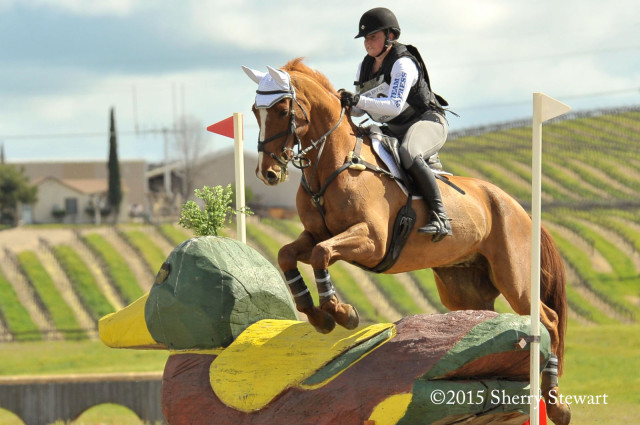 Patricia New’s Fleeceworks Mystere du Val is back in action this season on the West Coast with a new rider in the irons, as Tori New has handed over the reins of her NAJYRC CH-J* gold medalist partner to give her younger sister Ellee a leg up to the Intermediate level.

“Bean” has enjoyed a storied career in eventing and amassed many fans along the way. After Beatrice Rey-Herme imported him from France in 2006, Stuart Black campaigned the 2000 Selle Francais gelding by Veloce de Favi to the Advanced level before Leslie Law took over the ride.

Leslie enjoyed a long and successful partnership with the horse, winning the The Fork CIC3* in 2008 and placing second the following year, winning the Richland Park CIC3* in back-to-back years in 2008 and 2009, finishing third at the Jersey Fresh CCI3* in 2009 and winning the Adequan USEA Gold Cup at the 2009 American Eventing Championships. 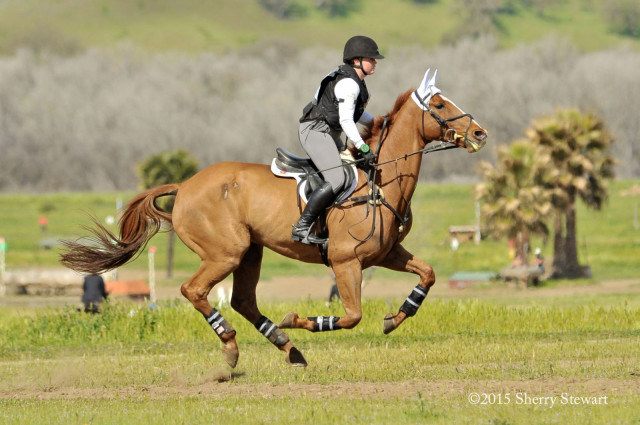 After retiring on cross country at Rolex in 2010, Bean stepped down to the lower levels and found his forever home with the New family the following year. As a Young Rider mount, Bean carried Tori to individual gold and helped win team gold for Area V at NAJYRC in 2012.

Tori successfully moved up to the Intermediate level on Bean the following year and decided to take a break from competing to go to college when they started running into trouble at the two-star level.

“I went to college after that, and my sister started riding him just a few times a week keeping him busy, because this horse cannot just stand around,” Tori said. “After that, when I came back from college, we talked about it and decided that after Ellee’s Young Rider horse got hurt, she would take the ride on Bean.”

Ellee competed Bean twice at Preliminary in preparation for the move up, and they successfully completed their first Intermediate at Fresno County Horse Park in February, finishing third on a score of 35.8.

“I think it was kind of a big step, and we took it pretty fast, so I was really nervous, but he keeps you going because he knows what he’s doing,” Ellee said. “He’s happy to go out there, and he loves cross country, so he loves going out of the start box.”

The next weekend at Twin Rivers, Ellee and Bean jumped clear again on cross country only to unfortunately part ways in show jumping, which Tori pointed out is all part of the learning curve when it comes to this quirky gelding. “I think I didn’t give her enough credit on riding him until I actually had to ride him,” Ellee said.

Ellee and Bean won their third Intermediate start at Copper Meadows earlier this month on a final score of 30 and led the dressage at Galway Downs this past weekend in a star-studded division before retiring on cross country. With the partnership still in a growing phase, she said she’s lucky to have the ride on such an experienced campaigner.

Frankie Thieriot Stutes caught up with both Tori and Ellee and Bean himself at Galway Downs this past weekend to talk about his ongoing journey with these two sisters. You can watch the video below to see the full interview. Thank you to Frankie, Tori and Ellee (and Bean!) for their time, and stay tuned for more exclusive video interviews from Galway Downs.