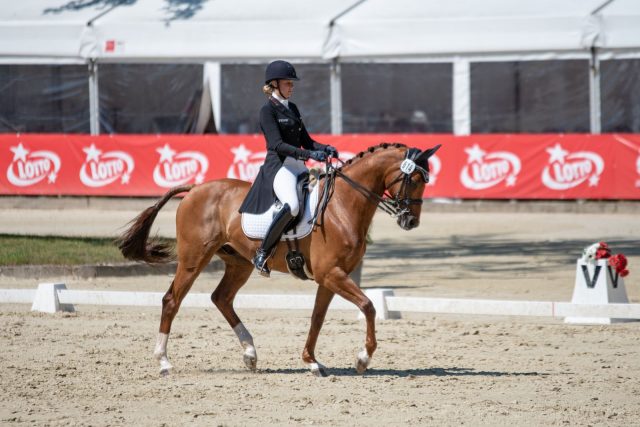 Seven teams are in the hunt for Nations Cup victory at Poland’s LOTTO Strzegom Horse Trials, with France taking the early lead after dressage today. Sweden lies second, and Germany rounds out the top three.

The CICO3* Nations Cup individual leaderboard was topped by Marie Kraack from Germany, who scored a 26.1 with Havana Club.

“He was really super, he did what we expected from him, and he performed very well,” says Marie of the 15-year-old Polish-bred gelding (Mesandra x Nike, by Cardiff).

Linda Algotsson of Sweden and Fair Spot sit second on a dressage score of 26.3 …

… followed by Yoshiaki Oiwa of Japan with Duke of Cavan, who scored a 28.2.

“He was very good, I’m happy with the test. He was a bit tense inside, I could have done a nicer test, but otherwise I’m really pleased with him,” Yoshiaki says. 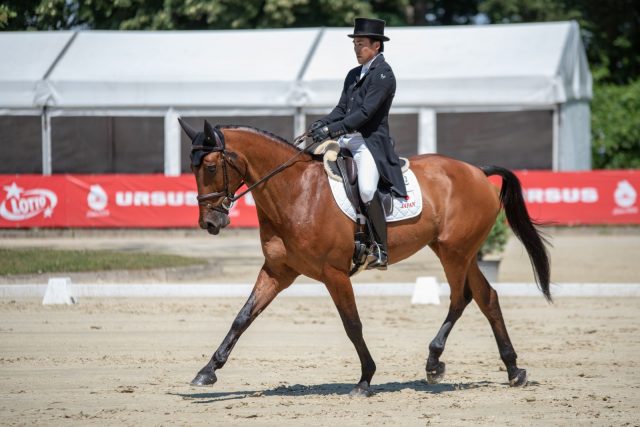 The best placed Polish rider was Mateusz Kiempa with Lassban Radovix, who are currently 11th: “I think the test went alright. It is a great honor for me to compete in the Nations Cup representing Poland — I want my score to be as good as possible for our team.”

The Nations Cup competition in Strzegom is the first test of the new Olympic format, which will be used at the 2020 Tokyo Olympic Games. Three riders compete for each team, and their added score counts for the overall classification.

In the two-star competition two riders are tied for the lead with the same score: Maxime Livio (FRA) with Ariano du Quinze and Mateusz Kiempa (POL) with Libertina. In the one-star Pia Münker (GER) with Dunkin Donut M. has taken the lead.