The Transport Research Laboratory (TRL) conducted film analysis of 100 accidents, including 75 cross-country fences and 25 show jumping fences. It was found that the potential for a crushing injury was related to the rotating motion and landing angle of the horse. A landing angle of more than 90 degrees was considered to provide a significant risk of crushing injury to the rider. This happened when the horse hit a fixed obstacle between its knee and elbow. Below this, the horse was able to scrabble over, but above this, the horse stayed behind the fence with the rider staying seated or ejected over the fence. A mathematical model was developed and a full-scale crash test horse was used to simulate the load conditions between a horse and fence. Based on the results of the test program, TRL established that if the rail anchorage was designed to break at a controlled load to ensure that the rail would fall, this would remove the vertical load between the horse and the fence.

TRL designed a breakable pin with the precise failure strength to allow the rail to drop, thereby stopping the horse from rotating or somersaulting. This means the horse can hit the rail fairly hard without the fence collapsing and still keep its footing, but if the critical load is reached, the pin would fail with the potential of minimizing risk of injury to both horse and rider. The final design and manufacture of the pins has been carried out by Barriers International, Ltd.

Another topic of debate has been the placement of the support posts behind the vertical logs at Rolex, but this arrangement is used in every single frangible pin fence design presented in the handbook, including the flower box below. 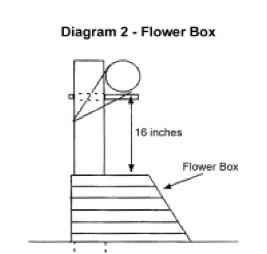