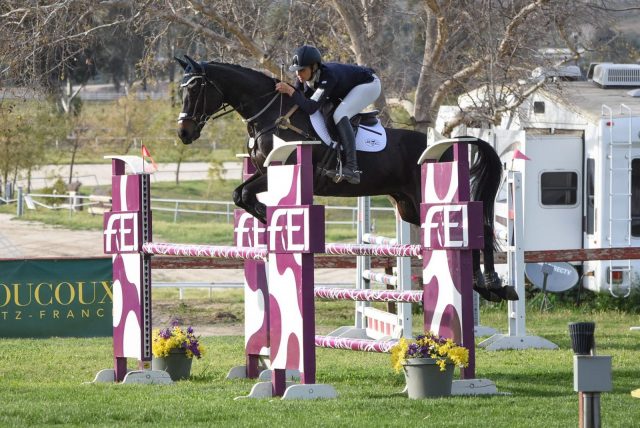 It was an action-packed day in Temecula, California as the competition got underway for the Galway Downs International Horse Trials. Frankie Thieriot Stutes, Gina Miles and Harper Click were the big names of the day as they currently lead the CIC3*, CIC2* and CIC* divisions, respectively.

Twelve months ago Frankie Thieriot Stutes picked up her first CIC3* win aboard The Chatwin Group’s Chatwin here at Galway Downs. Now a year later with a new baby in tow, she’s gunning to repeat her 2017 performance. So far so good! These two are out in front of the three-star group on a score of 32.8. 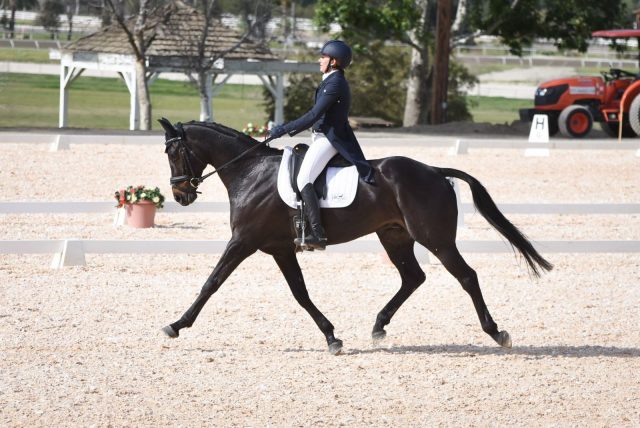 “I thought the trot work was honestly the best he’s been. My canter work actually he got quite strong. He swapped on me int he second counter canter. He was really quiet in the warm up, and going into that ring was a little bit more electric than I thought, and I might have pushed a bit too much early on in the canter, and he kept going with it,” she said. This weekend competitors are riding in the newly created Grand Prix arena, which features brand new Footing Solution USA’s footing.

“Overall, it’s just so fun to ride him on the flat. Tamie [Smith] keeps telling me, ‘just go in and enjoy your horse.’ Because I want to make it all really good and kind of bother him the whole time. I’m trying to enjoy the whole process.”

After posting the only sub-30 dressage score of the class (28.8 or 43.2 in the old scoring), they had one rail down in Marc Donovan’s show jumping course. “I’ve been really working to pick a rhythm and stick with it. To me that’s our biggest obstacles in our partnership together. I came in a little hot to the one-stride, but other than that I did feel like my rhythm was better and I was happy with that today,” she smiled. 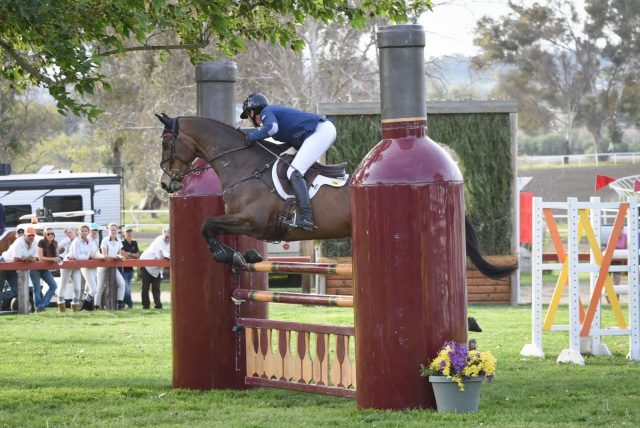 Starting fresh off their huge Fair Hill CCI2* victory last year, Tamie Smith and Sunsprite Warmbloods’ Sunsprite Syrius are sitting pretty in second place of this weekend’s CIC3*. They earned a 31.2 in the first phase and added four time penalties in show jumping for a two-phase result of 35.2.

“He’s out of control! He’s been a complete wild Indian since he came back from Fair Hill. He was like this as a 5-year-old, but then settled in and had been a perfect gentleman, so now he’s a complete wild crazy lunatic, but he still tries so hard,” Smith said of the cheeky 10-year-old Trakehner. “The flat he was very good. He’s green at the level. I didn’t get my changes, but everything else I thought was very good. He show jumped beautifully.”

Tamie is also in seventh with Kevin Baumgardner’s Wembley on 56.7 penalties points. This comes after accidentally forgetting the final fence on course caused her to pick up 22 time penalties. 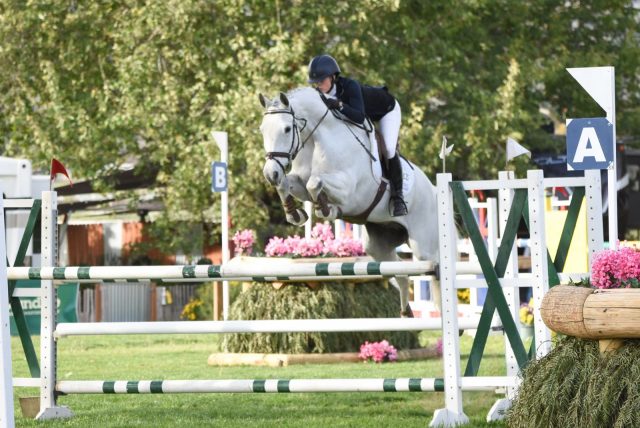 Joining them in the top three are fellow CCI2* winners Helen Bouscaren and Ebay, who took first place here at Galway Downs last autumn. They add two rails to their dressage result (30.2) for a current score of 38.2.

“He was really good on the flat. He was the most rideable he’s ever been. At times I needed to go for it a little more. He broke from the trot out of the canter twice–that’s a new one for us. Normally I’m just holding on for dear life. But I was really happy with how he behaved and I was able to show him off in the trot. Then he jumped really well. I thought he didn’t deserve two down. I kind of robbed him there, but that’s ok we’re both building a partnership still,” she said.

These two are still relatively new to one another. Their first international competition together was this event last year where they finished third in the CIC*.

Derek di Grazia and his own Ringwood Justice added four time penalties to an otherwise spotless ride for fourth place. They’re on a score of 48.7. 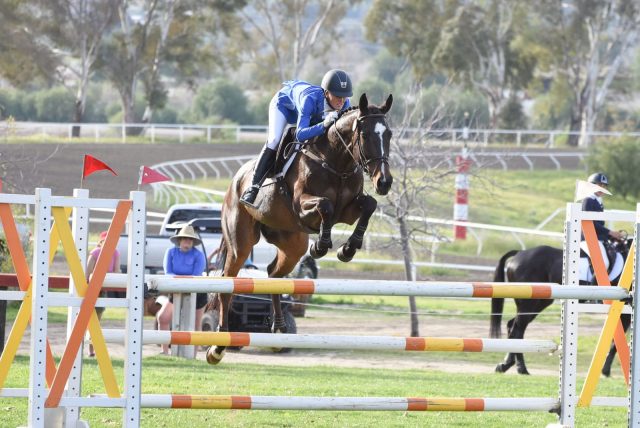 Marc Donovan’s show jumping course proved to be very influential across all international divisions. With tricky lines winding around cross country fences in the grassy Sycamore Field, clear rounds and quick times were hard to come by. Andrea Baxter and Indy 500 were the only pair in the three-star to get the elusive double clear round. They currently sit in fifth on a score of 40.

Bec Braitling and the Lauren Burnell’s handsome Walterstown Don took the time easy today as they weren’t tapped for studs. They added seven time penalties for a current result of 43.9.

Tomorrow is cross country day, and Eric Winter’s course has the CIC3* riders prepared for battle. While some look nervously at the beefy track, others, like Tamie, are eager for the challenge.

“In a long time I haven’t seen a three-star here be tough. They’d have a couple tough combinations on the course, but this weekend everything is a three-star combination,” Tamie said. “I think it’s great. That’s what we need. I think that Eric’s done a really great job with creating a lot of terrain on a piece of property that doesn’t have much terrain. He’s done really good job with making it a difficult track. It’s going to be fun.”

You can check out our course preview here. 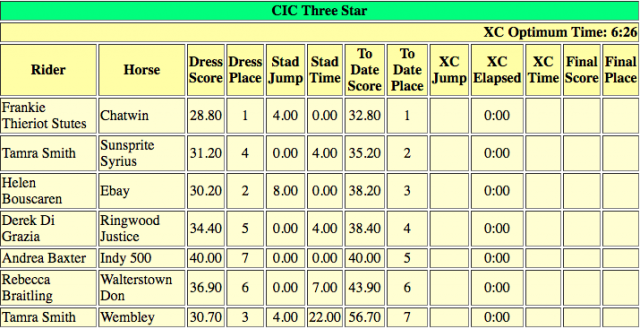