Do you ever stop and think about what eventing must look like to an outsider? I do — rather regularly, actually. Never more so than when covering an event at a stately countryside manor, the sort that remains open for tapestry admiring and marble-bust-coveting even when the eventing fraternity and their many unwashed dogs move into the grounds. How delightful, and how utterly baffling, for these groups of civilians to find themselves on the front lawn, watching a fit and well-muscled horse dance (however interpretively) across the grass.

It’s all a bit different this weekend at the Saracen Horse Feeds Houghton International Horse Trials, though. The horses aren’t the only novel surprise to biddies triumphantly waving their Historic Houses Association membership cards — zenith of modern art (and/or zenith of controversy) Damien Hirst has moved some of his most serene and subtle pieces of artwork onto the grounds. 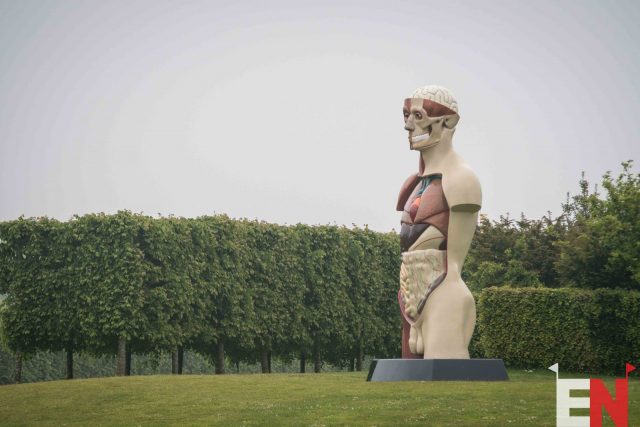 Nope, those aren’t small and well-manicured hedges. Those are tall trees. That is how appallingly big this thing is. Welcome to eventing in the UK, where everything is weird, just because.

Anyway, for the group of approximately 40 schoolchildren visiting Houghton Hall with their long-suffering teachers today, the horses barely warranted a second glance. It was all about the junk in the trunk, and they made sure everyone knew it.

Some of us are grown-ups, though, and actually watched the dressage. (Not me. I’m not a grown-up. From here on out is just guesswork.) Here’s your run-down of what happened between the boards. 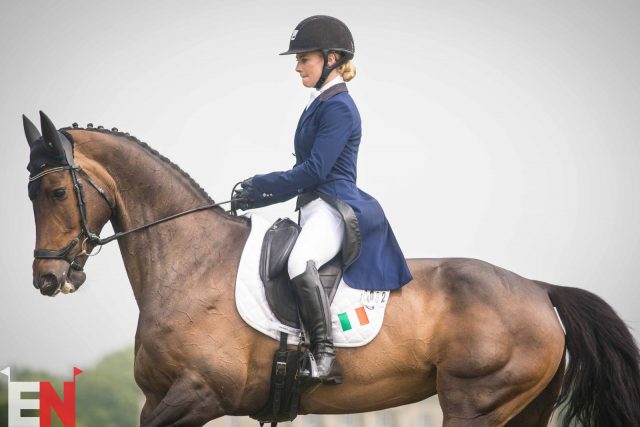 The CICO3* section is comprised of the Nations Cup competition as well as an ordinary CIC3*, so we’ve got a jam-packed field to keep an eye on this week. After full days of dressage today and yesterday, we just have 19 remaining tests to slot into the first-phase leaderboard tomorrow before we move onto the showjumping.

Despite boasting a big entry list (um, among other things), the competition is lacking in many of the major names we’d usually see here — with Saumur in France and Baborówko in Poland also taking place this weekend, as well as Tattersalls in Ireland next weekend, we’re missing some of the ‘obvious’ choices for a win. There’s still plenty of serious competition, but we’re enjoying the chance to focus on some up-and-coming talent, as well as fledgling team riders in the Nations Cup competition. 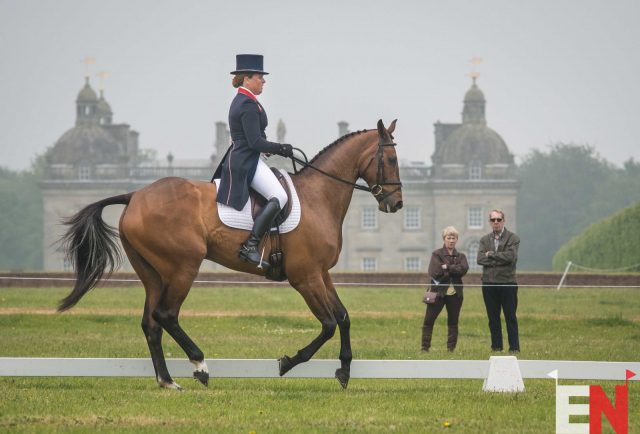 As is becoming her habit this spring, Pippa Funnell currently occupies the top two spots on the leaderboard, with MGH Grafton Street sitting on top on a score of 23.7, and dressage supremo Billy Beware in second on a 24. Billy Beware reroutes here after an early refusal and subsequent retirement put paid to his Badminton campaign earlier in the month. We’re yet to see him come good on his return to the top level — his first planned outing at Burnham Market was abandoned, though he led the dressage easily, and at his pre-Badminton prep run in Belton’s CIC3* he once again proved his consistency in the first phase, only to notch up a run-out and a considerable helping of time penalties across the country. MGH Grafton Street, on the other hand, finished 5th in the CIC3* at Chatsworth, so confidence will be on his side as we look towards the jumping phases. 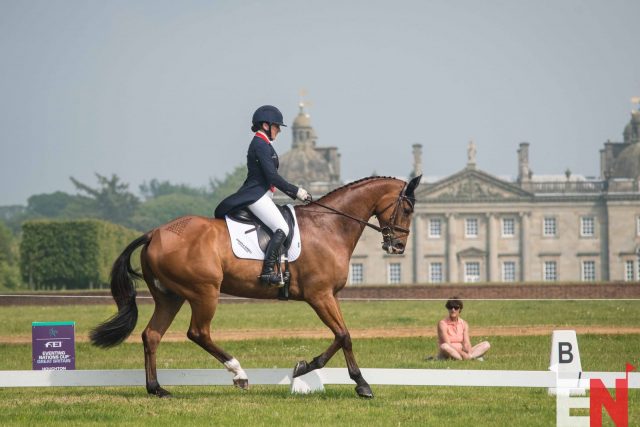 She’s not the only experienced British rider in the top 10 — Laura Collett and Mr Bass sit in 4th place on a score of 26.3, and European bronze medalists Nicola Wilson and Bulana slot into equal 7th with Kiwi Jesse Campbell, on their score of 26.8. But neither of these riders, nor Pippa, is on the home team for the Nations Cup — instead, we have a team of young guns, ably aimed at their targets by coaches Dicky Waygood and Chris Bartle. Pippa’s student, and daughter of longtime owners Jane and Jonathan Clarke, Chuffy Clarke makes her senior squad debut after moving up to this level last year. She rides Second Supreme, a former ride of Pippa’s, with whom she has been diligently expanding upon her education. They perform their dressage test tomorrow morning. 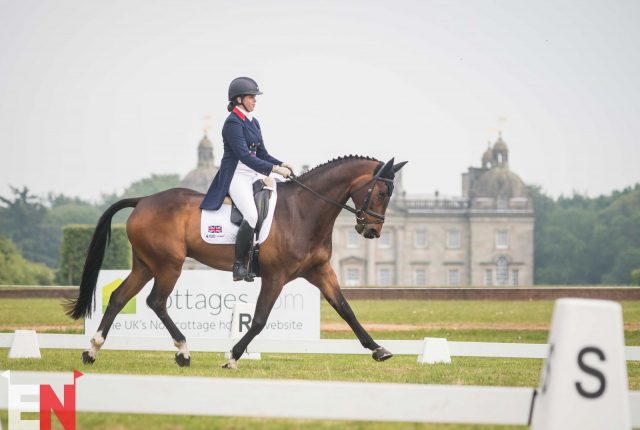 Team GB’s Katie Bleloch partners Bulano (no, not Bulana, but yes, she also competed – just to confuse us all!) Photo by Tilly Berendt.

Where are any of us without our best friends? Chuffy is lucky enough to make her team debut alongside hers — and Holly Woodhead has set a high standard, posting a 26.6 aboard Parkfield Quintessential to sit in 6th place currently. Fellow teammates Katie Bleloch (Bulano) and Matthew Heath (One of a Kind II) sit in 21st and 25th place, respectively.

It’s not just UK representatives in the top 10, though — Sweden’s Therese Viklund currently sits in 3rd place with Diabolique, on a score of 25.4, and New Zealand’s Jesse Campbell has two in the upper echelons, with Cleveland sitting 5th on a 26.5 and team horse Amsterdam in 7th on a 26.8. Germany’s Hanna Knueppel and Carismo 22 are currently 9th on a score of 27.5, and 10th place is occupied by British fan favourite Ben Hobday and Shadow Man II (28.6). There isn’t even a rail to spare between 3rd and 10th place, so tomorrow afternoon will shake things up quite dramatically. 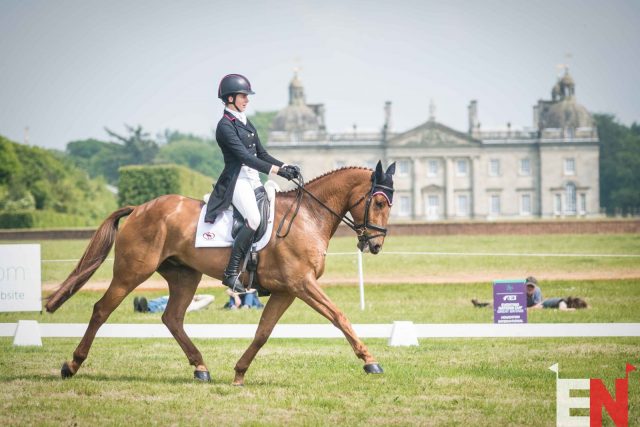 Caroline Martin and Danger Mouse post a 33 in the CICO3*. Photo by Tilly Berendt.

TWO OUT OF THREE FOR TEAM USA

Competing countries can field a team of three to four riders for a Nations Cup bid, with the worst score acting as a discard — but only if you have a fourth rider. The US team brings forward just three riders, which means that each of our all-female team will have to deliver the goods across all three phases in order to be competitive.

Two members of the team have completed their dressage tests already: Katherine Coleman and Monte Classico sit in equal 54th place on a score of 35.8, and Caroline Martin and Danger Mouse are in 33rd on a 33.

“This is Monte Classico’s first three-star, and only his second Advanced, so he’s really green at the level, and it showed in his test,” says Katherine. “He had nice movements, but he’s still green in the changes. It’s all a process. He does a really nice two-star test, and now I just need to establish that at this level.”

It’s no small ask to debut a horse at this level while also representing your country, but Katherine is pragmatic: “He’s pretty straight and pretty honest, so I won’t rag him around for the time, but I’ll aim to give him that experience for the future,” she explains. The nine-year-old gelding will be aimed at the prestigious 8/9yo CIC3* class at Blenheim this autumn. 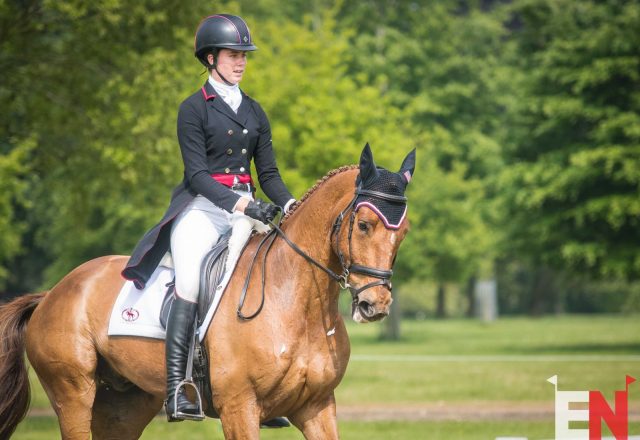 Caroline Martin opted to ride Danger Mouse for the team, rather than her experienced campaigner The Apprentice, and cites a lack of match practice as her reasoning.

“Because I broke my foot earlier in the season, The Apprentice lost some of his planned runs, and he actually hasn’t run at this level since Carolina,” she explains. “Danger Mouse has done a bit more this season and so we decided he’d be more prepared.”

Coached by Leslie Law, Caroline and her 10-year-old gelding produced a good test that saw them lose marks in places because of tension.

“He got a bit nervous going into the canter, and then he touched the boards and got even more nervous. He’s come a long way in this phase, but he’s always been nervous in the dressage because he’s a big mover.”

Both Danger Mouse and The Apprentice will contest Bramham next month, and Caroline is enjoying revisiting her old haunts at Rodney Powell‘s Wiltshire yard. Both she and teammate Hallie Coon are based there while they compete in England.

“It’s so nice to know the routine there and get straight back into it,” says Caroline. 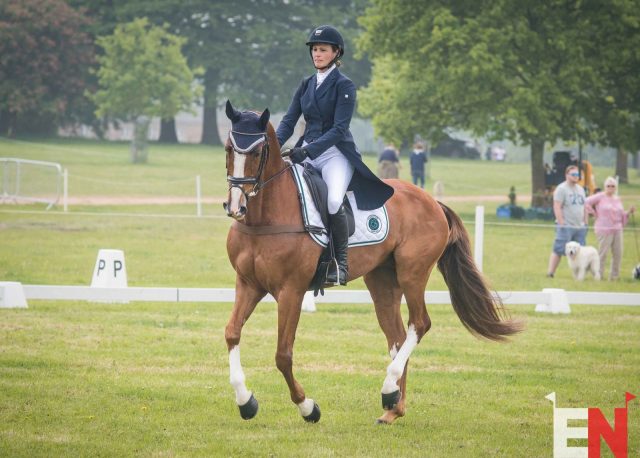 Both riders bring forward two horses to this week’s CIC3* competition. Today, Katherine rode her second horse, Billy Bandit, who, after a slightly argumentative test, posted a score of 42.8, which puts him in provisional 81st place. The former Flora Harris ride will be using this week’s competition run as preparation for Bramham CCI3* in a fortnight. Caroline will ride The Apprentice tomorrow morning. 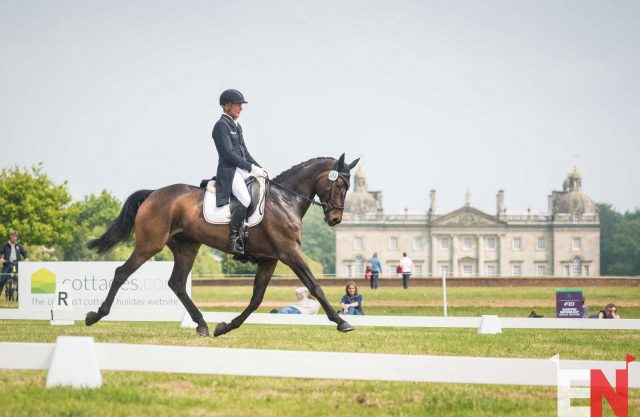 HOW THE NUMBERS ARE PLAYING OUT

There are six teams in the Nations Cup competition, and three of them — Germany, Ireland, and Great Britain — have four riders. This means that three of their riders have already completed the first phase, and so we know what their highest possible score will be. Assuming each of these teams’ final riders posts a discard score tomorrow, we’re looking at a maximum post-dressage team score of:

Of course, these can go lower — Ireland’s worst score currently is 36.7, Germany’s is 31.4, and Great Britain’s is 31, so if the final riders better those scores, the discard will change and the collective mark will drop even further. It’s looking unlikely that anyone will catch the home team in this phase — but there’s plenty left to come in the competition.

So where do the three-rider teams stand?

This means that if any of these three teams wants to be in a podium placing after the first phase, they’ll want to get as close to sub-30 as they can. A sub-100 collective mark is valuable currency in a Nations Cup.

8.52am GMT/3.52am EST: Caroline Martin and The Apprentice

The CICO3* showjumping will commence after the lunch break, so we’ll be back with an updated look at the scores and what, exactly, our competitors will have to do to earn those valuable series points then. In the meantime, pour yourself a drink and indulge in a little coursewalk: it’s Friday. You made it through another week. The Nations Cup for Surviving Adulthood goes to YOU, my friend. 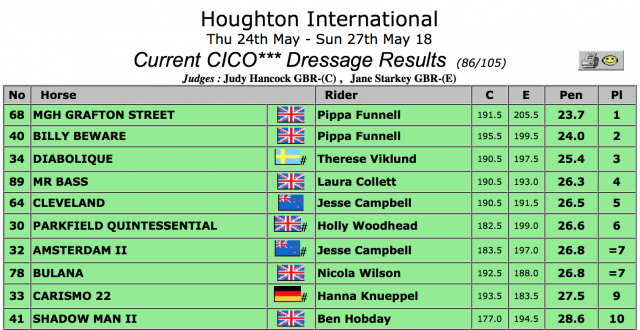 The top ten after day two of dressage at Houghton Hall.