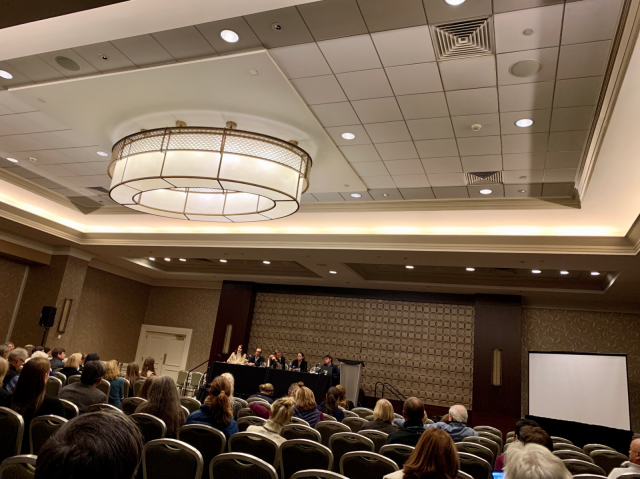 Friday was a jam-packed day at the 2019 USEA Annual Meeting & Convention. Here a few highlights.

ERQI Reports for Officials at Events: How They Will Be Used in 2020  — Speakers: Sam Watson, Diarm Byrne, Carol Kozlowski, Janis Linnan, and Rob Burk

Last year, the EquiRatings Quality Index (ERQI), a “traffic light” color coding system to indicate the level of risk a horse carries on cross country, was made available to all USEA members. Since then, the ERQI for each registered horse has been visible only to the USEA member associated with that horse. At a recent USEA Board of Governors meeting, the Board voted to supply a list of horses with red (less than 50% clear cross country rounds) and amber (less than 60% clear cross country rounds) ERQI ratings to the Organizer and President of the Ground Jury to assist them in monitoring horse who are more at risk of not jumping clear across country.

Jeff Newman, CEO of the Fair Hill Organizing Committee (FHOC), recalled doubts during that last year’s USEA convention that the Fair Hill venue would be ready to host a five-star in 2020. He and Mary Coldren, Competition Manager of Fair Hill International (FHI), of were on hand to present the progress made towards upgrading the venue in preparation to host North America’s second five-star event.

The late morning session of the USEF High Performance Athletes Open Forum was so packed to standing-room-only capacity that they expanded the floorspace for the afternoon session. That speaks to an invested enthusiasm about the future of our U.S. team, propelled by team gold at this year’s 2019 Pan American Games in Lima and looking forward to the Tokyo Olympics next year. Even moreso, there’s a sense of long-term investment in the health and success of future teams, via discussions about the streamlining the track from young riders to Olympians

Over the previous decade the number of upper level event horses that remain at the highest levels of the sport for extended periods of time has anecdotally been dwindling. Also, it is rare to see horses return to represent the U.S. on international teams. This discussion featured statistics provided by the USEA and Equiratings to strengthen understanding of this issue and perspectives from coaches, trainers, riders, grooms, and veterinary professionals on the possible reasons and solutions.

Much more to come. Go Eventing.