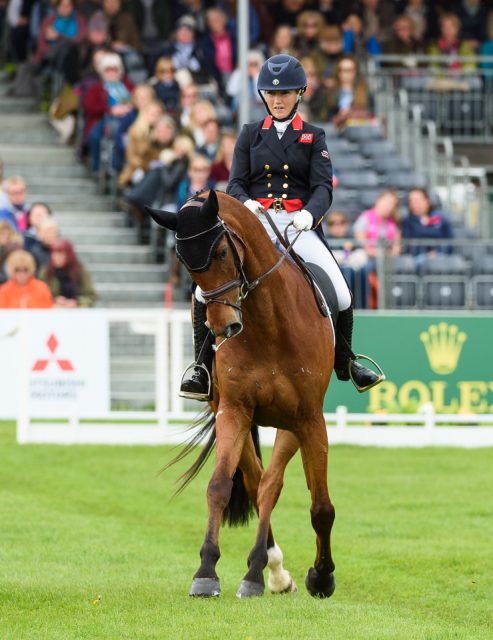 Laura Collett and Mr Bass deliver the goods to be the best of the Friday morning session. Photo by Nico Morgan Media.

It feels like we’ve been waiting for years for the remarkable Mr Bass to make his Badminton debut. Last year, he broke our hearts when he was withdrawn at the eleventh hour, but this year, the frequent FOD-er has finally made his first strides onto the world’s biggest stage with rider Laura Collett. And what strides they were – though Laura is arguably one of the best dressage performers on the circuit, it’s the horse’s most difficult phase. Nonetheless, they posted a 27.6 – over two points better than the mark he finished on at his five-star debut, where he was second. Today, it’s been good enough for provisional sixth.

You’ve got to be in it to win it, and Laura Collett is all in. Check out her lucky manicure! 💅🏼 #goeventing #eventersofinstagram #mmbht #fashqueen

“He’s built like a wheelbarrow, so getting him to come up is difficult, but he’s come on so much,” said a beaming Laura. “I’m delighted with him; he tried so hard, bless him, and he doesn’t find dressage easy. But I wouldn’t change what I’m sat on here for the world. I thought he’d be okay in there because he loves an atmosphere, but I’m annoyed with my first change – I can’t afford to make mistakes like that on him, so it was costly.” 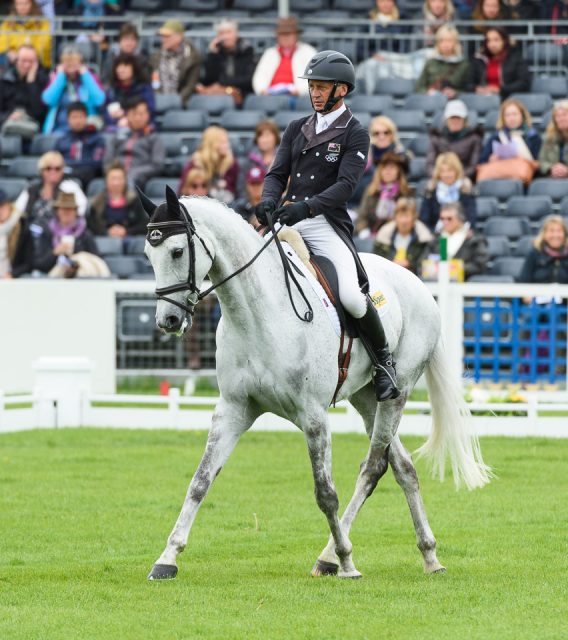 Andrew Nicholson‘s Swallow Springs was, like Mr Bass, enormously impressive in his five-star debut – he finished on his dressage score at Burghley last year to end up third overall. Today, ‘Chill’ showed just how much he’s grown up over the winter, with much improved balance and flow throughout his test. For the notoriously tricky twelve-year-old, this is a coup – in the past, Andrew has joked that the horse only ever thinks about when he’s getting his lunch, and when he might decide to dump him.

“He gets better all the time, and he’s still quite young,” said Andrew. “But he feels stronger now, and I’m very pleased with him.” 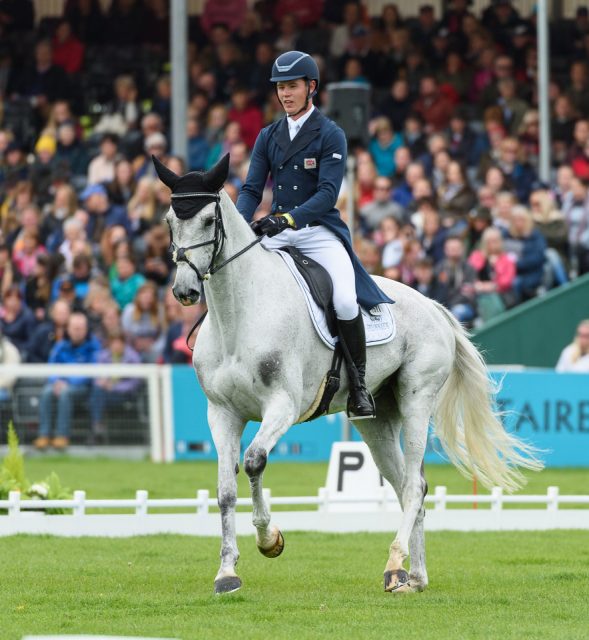 Will Furlong and Collien P 2 produce the goods. Photo by Nico Morgan Media.

Young gun Will Furlong delivered a result beyond his 23 years today, posting a score of 30.2 with the occasionally tempestuous mare Collien P 2. This is a personal best at the level for this pair, who competed at Badminton last season and finished their year at Pau.

“I was very early to go, and there’s a lot of good people to come, but I’m mostly happy about the score,” said Will. “She stayed a lot more rideable than she has done in the past. There’s more to come there, but the pleasing thing was that there were no obvious mistakes. Before, she’d get some really good marks and then some fours, so I’m pleased with her consistency.”

This season marks a return to form for the mare, who jumped clear around Badminton in 2018 but then saw her season marred by a minor injury at her next competition at Haras du Pin. There, she studded herself on her belly and was withdrawn from the competition after cross-country, disrupting her schedule and forcing Will to withdraw from Burghley. Instead, they rerouted to Pau, but retired on course: “We went to Pau a bit unprepared. It’s been quite a long journey, and we’ve really gone back to basics, but I’m hoping I learned from my mistake last year. I’m inexperienced as much as she is, and unfortunately you have to make the mistakes to learn from them.” 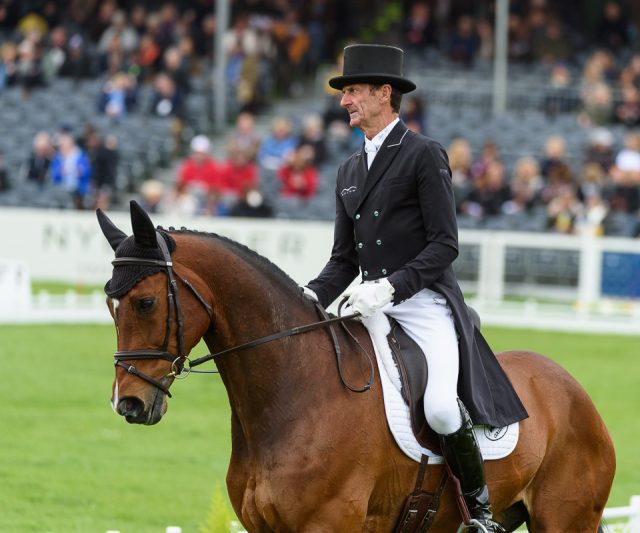 “I’ve spent the week in Hong Kong getting up at 2 a.m. – I’m not too sure what time zone I’m in!” Mark Todd might be feeling the after-effects of some recent frequent flying, but he didn’t show it in the ring – he and NZB Campino posted a 30.6 to sit 11th provisionally.

“That’s sort of a normal test for him – he can do some funny things in there and get a bit funny in the contact,” said Mark. Both Mark and the horse have undergone rather a change of pace in the lead-up to Badminton – Mark’s recent foray back into racehorse training has taken him to Australia and Hong Kong, while ‘Kinky’ has largely been ridden by head girl Jess Wilson in the interim. 22-year-old Brazilian eventer Rafael Losano is based at Mark’s Badgerstown stables, and was afforded the rare privilege of running the experienced horse in an Open Intermediate section at Gatcombe, where he finished fifteenth. Grand Prix dressage rider Charlie Hutton, too, has been conscripted in to fine-tune the horse’s flatwork.

“It all feels pretty much the same, although the stirrups are longer than I’m used to now,” laughed Mark. “But he’s a good old boy, and as long as I don’t do anything too stupid, he’ll be fine. But having only done one or two intermediates this spring, it’s all looking big.” 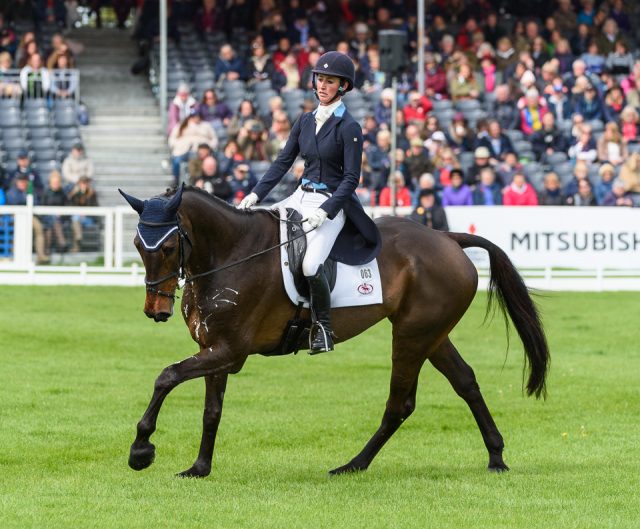 After a tense start, Fernhill Fortitude settles for his longtime partner Jenny Caras to score 36.9. Photo by Nico Morgan Media.

It’s been an exciting morning for debutantes, too: five Badminton first-timers put scores on the board and came back happy with their results. The first of those was our first US rider, Jenny Caras, who rides her fifteen-year-old Fernhill Fortitude. They scored 36.9, putting them in equal 39th at this early stage of the competition. Their scores were slightly marred by a tricky start to the test, which saw ‘Forty’ shy and react to the electric atmosphere, with several early breaks into canter. After those first few moments, though, he settled into a pleasant, consistently-marked test.

“He was a little tricky in places, but I was happy with how he handled the atmosphere,” said Jenny, who is enjoying her second competitive trip to the United Kingdom. This time, she’s based herself at Oliver Townend’s Gadlas Farm, and she’s been soaking up the opportunity to learn from the best. “I couldn’t think of a better place to be based – he’s so supportive. It’s great being there; everyone on that yard works so hard, and what a role model he is. He’s told me to enjoy [Badminton] while it lasts, to try to make it as smooth as possible, and to check off each fence as it comes.”

Jenny and Forty have gained some five-star experience on home turf at Kentucky, but both found the atmosphere here quite different: “It’s a lot to take in, isn’t it! When we did the arena walk I said that it didn’t seem that atmospheric, but when you get in there and the crowds are so close, it’s a big atmosphere.” 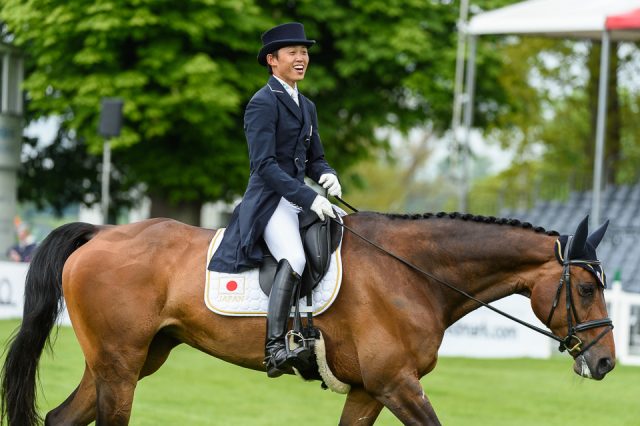 Kazuma Tomoto and Tacoma d’Horset put the first score on the board for Japan this week. Photo by Nico Morgan.

Another notable debutante this week is Japan’s Kazuma Tomoto, who has been based with William Fox-Pitt for the past couple of seasons. He and Tacoma d’Horset put a 32.1 on the board for equal 23rd.

“It’s amazing in there – it’s like a movie! I was like a tourist sight-seeing,” he laughed. Kazu has been walking the course with William who, at 6’5, has a slightly different perspective on the fence dimensions. “He always says, ‘nice fence, no problem’ – but to me it’s huge!”

This afternoon’s session features a plethora of heavy-hitters – we’ll be bringing you a full report later today. In the meantime, here are the tests to tune in for… 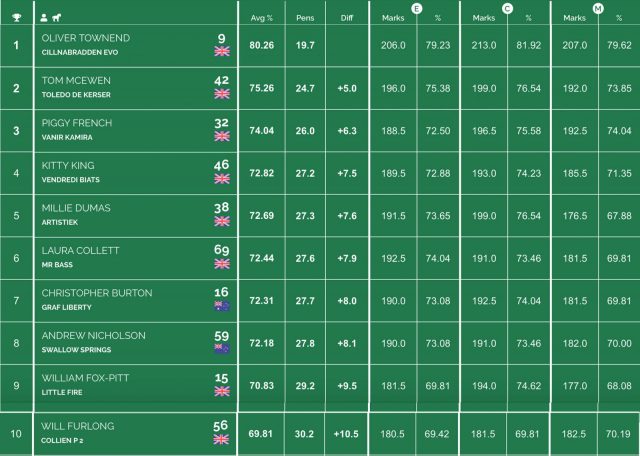 The leaderboard after Friday morning’s session.