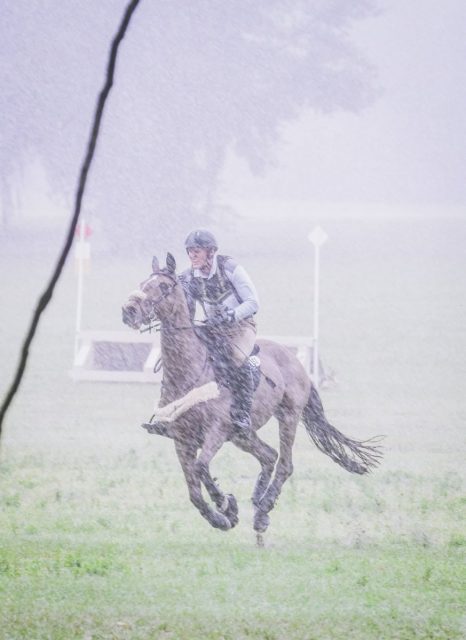 It rained just a wee bit at Rocking Horse. Photo by JJ Sillman.

I was looking at all these amazing photos JJ took at Rocking Horse, and the pouring down rain that happened on cross country for some riders, and honestly my first thought was “Their poor tack!” All the slimy, wet, gross tack that would have to be cleaned and dried, and all those beautiful saddles with water damage, and the dirty boots and can you hear my OCD coming through the computer? I’m sure it wasn’t a picnic riding in that weather, but the aftermath of cleanup gives me nightmares.

Equestrians from all disciplines are speaking out about needing more support for diversity. This article from The Plaid Horse hits the nail on the head. “If the equestrian community is so emotionally attached to a version of history about a piece of property that they are unwilling to learn from new information that requires them to think critically about how that history has harmed others who are also a part of the equestrian community, then this sport is no worse for wear when close-minded athletes, organizations, or owners take themselves out of the game.” [Horse Sports Aren’t Doing Enough to Support Diversity]

Bromont Olympic Equestrian Park has been sold to a new owner. Bromont, which has been for sale for well over a year, has been taken over by Marc-Antoine Samson and White Horse Productions (WHP), who will lease the property from Shefford County Agricultural Society (SACS) with the intent to buy it by the fall of 2022. The young entrepreneur had been contemplating acquiring the property for several years. “The primary reason for our commitment to the Bromont Olympic Equestrian Park is to restore its credentials” he stated. “We expect an economic impact, both direct and indirect, of up to $50 million dollars per year for the Bromont region in addition to local, national and international media exposure.” [Bromont Finds New Owners]

SmartPak USEA Pony of the Year award goes to Señor Santana, a 15-year-old Quarter Pony gelding of unknown breeding, owned and ridden by 13-year-old Riley Jones of Thompson’s Station, Tennessee. Before he was Pony of the Year and before he met Jones, “Santana” was a rescue horse. He was found on a farm in middle Tennessee in a nine-acre field with 37 other horses. “They had no grass and were eating trash,” Jones described. After Santana was rescued, Jones’s family purchased Santana from his first adoptive family when Jones was just 7 years old. [From Rescue Pony to Champion]

A shattered splint bone can hardly be considered a blessing, but COTH blogger Sophie Coffey found the rehab time with her mare Callie to be useful, and dare I say it, joyful? Not what you would expect from months of doing rehab walking around the arena, but if anybody can find a silver lining, it’s horse people. [The Silver Lining of Rehab]

Best of Blogs: The Princess And The “Whee!”