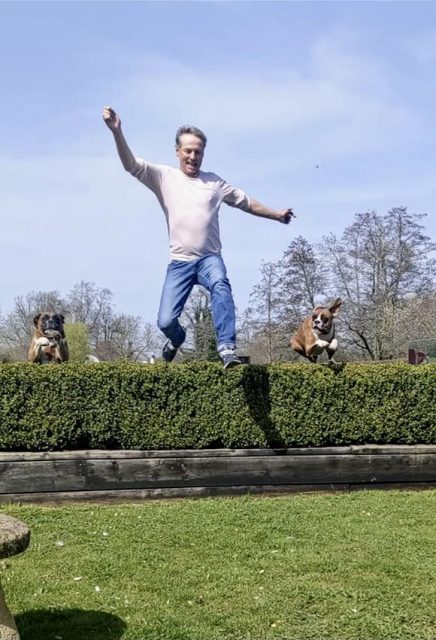 Carl Hester is training for a jumping career…just not in the way you imagined. Photo courtesy of Carl.

Congrats everyone! You survived April Fools Day! How many articles caught you out? I certainly spent most of the day looking at headlines and seriously wondering which ones were jokes and which were not. In this day and age, it’s hard to tell anyway and I ponder curiously which articles are coming from The Onion and which ones are real life. At least we got to have some light-hearted fun for one day, but seriously, we are searching for one more Ameristralian.

Get to know California cutie Woodford Reserve, a delightful bay that Erin Kellerhouse fell in love with six years ago when she found him in Ireland as a four-year-old. The pair have since then progressed through CCI4*-L level, recently winning the CCI4*-S at Galway Downs in March. A pretty low-key guy at home, Woody lights up at shows and knows how to perform when needed. [Behind the Stall Door: Woodford Reserve]

Hold on to your (cowboy) hats, folks, because the western riders and quarter horses are coming. The USEA is pleased to announce a new parallel set of levels offering western eventing in the United States. To be held in conjunction with existing national levels up through Advanced, competitors will compete over the same course and tests offered at the traditional competition but will be able to do so while competing in western attire and western stock saddles. [Welcome Western Eventing]

Madeleine Scott has taken Crosby’s Gold from the racetrack to the four-star level, but it hasn’t been a smooth journey. However, she took the break from competition in 2020 and put it to good use, getting Crosby some extra time to recover from splint surgery and now they’re ready to do work at The Fork CCI4*-S this weekend. Originally from British Colombia and a non-horsey family, Madeleine eventually found her way to Florida to work for Kyle and Jen Carter in 2019, and hasn’t left yet. [OTTB Crosby’s Gold Takes Madeleine Scott Up the Levels and Across the Country]

Mirror, mirror on the wall, who’s the fairest of them all? In sport psychology mirroring refers to the tendency for people to reflect – or copy – the actions, attitudes, beliefs, and behaviors of those around them. The idea behind mirroring is that everyone we meet is a mirror, and if we’re not careful, our actions and reactions might begin to reflect what we see in others… even if those traits are negative. Learn how to surround yourself with positive thoughts and people in order to mirror them and make progress with your mental game and your riding game. [Daniel Stewart’s Mirror Mirror]