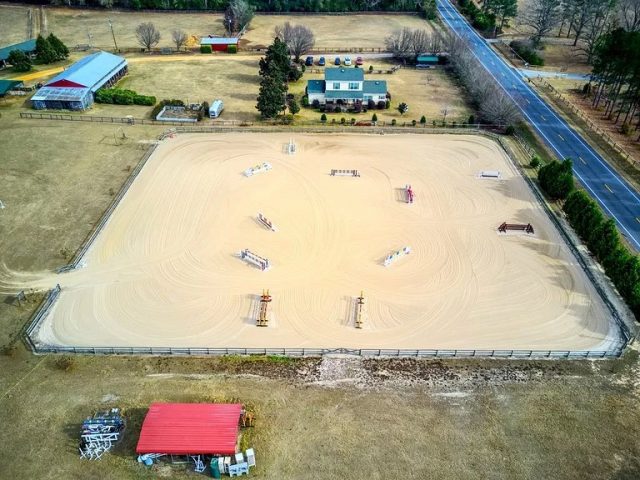 The famous Paradise Farm in Aiken, South Carolina, is now under new ownership! The lovely Babette Lenna and a group of investors have purchased the 88-acre property well known in the eventing community and hope to continue it’s positive influence as they progress. They plan to continue to build on the foundation created at the farm over the past 30 years. With a full cross-country course from BN to Preliminary, three competition rings, amazing riding terrain, close proximity to dirt roads to hack on, and 18 stalls with huge paddocks the farm has everything. While they do not plan to host a recognized event for now, they look forward to expanding the property’s role as a solid resource and venue for the entire Aiken equestrian community.

Are you transitioning a racehorse into a sporthorse this winter? While you’re not alone, and this may not be your first time, some tips from the co-founder of Mid-Atlantic Horse Rescue may be helpful. Beverly Strauss rehomes about 100 racehorses every year through her organization, starting in 2002, so she has some pretty good ideas about how to properly turn a racehorse into an event horse, or any other kind of sport horse. [7 Tips for Transitioning Horses Off The Track]

Good grooming tips from a top groom never go awry. Denise Moriarty grooms for  Olympic show jumper Kent Farrington now, but her horsey upbringing had far more humble roots. She got her start caring for lesson ponies at Turlough Equestrian Center, an Irish riding school, and roaming the countryside aboard young horses. She moved into young rider classes with her Connemara pony Prince Owen before giving up riding while she studied veterinary nursing and earned her masters in agricultural science. Her first job in the United States was grooming Marilyn Little’s show jumpers and event horses, but with show jumping her first passion, Moriarty found a job with Farrington and has been by his side for nearly a decade. [Grooming Tips With Denise Moriarty]

Winning a CCI4*-L on your dressage score is no mean feat. But Woods Baughman and C’est La Vie 135 did just that at Tryon last week. On the strength of the only double-clear cross-country round in their division, Woods Baughman and C’est La Vie 135 on Sunday won the Dutta Corp./USEF CCI4*-L National Championship, held at Tryon International Equestrian Center. Despite being held on cross-country and Baughman losing track of where they were against the clock, the pair ultimately were the only ones to finish Capt. Mark Phillips’ track without time penalties, moving them from third after dressage to first after cross-country Saturday. Another double-clear round in Sunday’s show jumping competition secured their win on their dressage score of 29.4. [Watch Why They Won]

Jana Flagler was a horse-loving child born into a non-horsey family. While her parents dreamed Flagler would one day be a concert pianist, which she wholeheartedly admits she is not, Flagler wanted to ride and jump horses from the first time she saw someone jumping on television. As a teenager, Flagler got that opportunity thanks to the Huber family who ran Tipasa Farm in Oklahoma at the time. “I did anything that needed doing around the barn to get opportunities to ride,” Flagler shared. “And I would ride anything. I only cried once— the day my newest ‘project horse’ was a 15h Appaloosa polo pony who was five feet wide with a stringy tail and no forelock.” [VIP Volunteer: Jana Flagler]