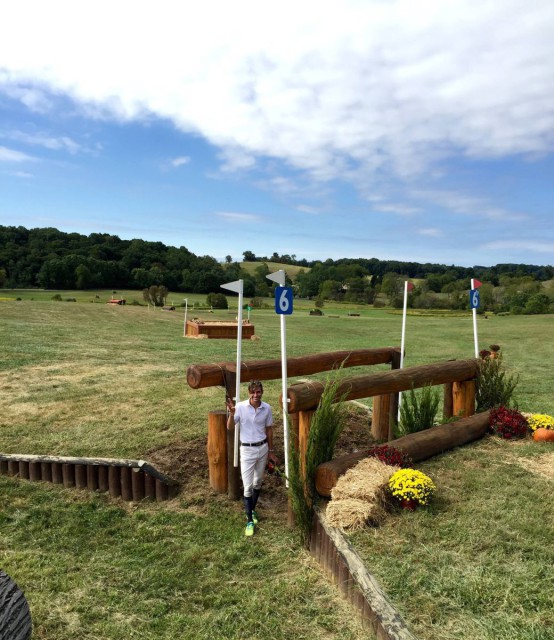 Chris Talley, competing Unmarked Bills in the CIC2* at Plantation, eyes an Advanced oxer with hopes for the future. Photo courtesy of Hannah Salazar.

In completely non-horsey news, I recently splurged and bought myself a book that is entirely about baking all the different kinds of bread. My obsession with baking is only trumped by my obsession with horses, but let’s just say I’m 1000% addicted to it. I don’t know why this is, but I feel like the focus and precision of baking along with the ability to feed my friends and family delicious things are factors in this continued neurotic passion. I’ve already mastered croissants, kouign amann, challah, regular french boules, pretzels, garlic knots, and I’m now continuing on to finally figure out baguettes and bagels. Don’t worry, I don’t eat them all myself, I usually find that the goods are gone within a few hours of coming out of the oven courtesy of willing participants that live near me.

The U.S. Eventing Association announced some updates on its Collapsible Fence Study study being conducted and asked for eventers to contribute information on horse sizes through an online survey. “The study is focused on understanding the horse/fence contact and interaction during rotational falls as a means to provide insight into rotational fall prevention and requirements to guide the sport’s course and safety device designers,” said Dr. Suzanne Weaver Smith, who’s leading the study alongside Gregorio Robles-Vega, Lange Ledbetter, Christina Heilman and Shannon Wood. [USEA Collapsible Fence Study]

Angry animal advocates can calm down: Tens of thousands of wild horses and donkeys will be spared the threat of an untimely death.The federal government said this week that it will not consider a suggestion to euthanize the animals or sell them to slaughter. The pronouncement, issued by the Bureau of Land Management, followed a public outcry over an advisory board’s recommendation on Friday that the agency kill or sell all of the 45,000 horses and donkeys in its custody that cannot be adopted. [No, The Federal Government Will Not Kill 45,000 Wild Horses]

Irish show jumper Cian O’Connor has a new horse named Callisto who has an unusual fear, and he’s figured out the winning formula for dealing with it. Callisto, as it turns out, is petrified of other horses. Competing in the ring by himself is fine, but during the warmup and potentially the awards ceremony, all hell would break loose. After contacting the FEI to clarify the legality, he found that he could use a pair of blinkers during the warmup and the awards, which keeps the horse cool and calm. His work payed off with a blue ribbon in the 1.50 meter Suncor Energy Round at Spruce Meadows. [Cian O’Connor Reveals Secret Weapon]

Hot on Horse Nation: 7 Horses and Their Tiny Facsimiles

If there is anything I swear by, it has to be the Back On Track No Bow Wraps. I have several horses that stock up pretty badly behind if they’re stuck in the stall overnight, or at competitions, and I find the difference between wrapping them with my Back On Track wraps versus regular wraps to be significant. I recommend them to all my students especially for traveling to shows, and my top level horse lives in them if he can’t be out in the field walking around all night. [SmartPak Product of the Day]