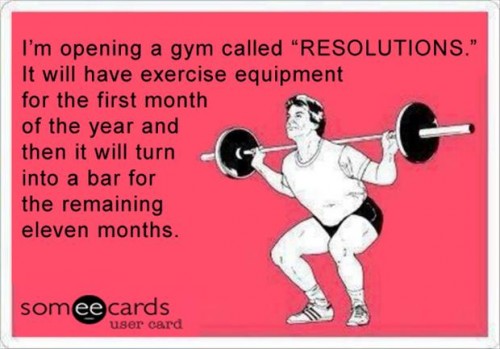 What a novel idea!

I will usually make a few generic resolutions at the beginning of each new year. I will be the first to admit, however, that I am absolutely terrible at sticking to them. So my resolution this year is to stay away from the gym until the initial January crowd clears out. I think that’s achievable, don’t you? Very little effort involved. Are you sticking with your New Year’s resolutions? Do you want to share your resolutions with us? I am putting together a reader submission fueled post that will hopefully help keep us all motivated and accountable as January drags on. If you’d like to share your resolution and the story behind it, email [email protected].

The 2014 George Morris Horsemastership Training Session continues in Wellington today. The young riders are no doubt learning more than they could have hoped for during this boot camp. I’ve been trying to catch up on the sessions all week, but my OCD has not allowed me to get past the first session since I don’t know all of the horses and riders by heart yet. [USEF Network]

The days of the New York City carriage horse may be coming to a close. The incoming mayor, Bill de Blasio, has promised throughout his campaign to shut down the carriages. Horse drawn carriage businesses have come under much scrutiny over the years after several horses passed away. While this movement will undoubtably be met with both support and ridicule, it appears that the fabled New York carriage horse is soon to be no more. [NYC Carriage Horses’ Days are Numbered]

Country superstar Shania Twain has been quite vocal about her love of horses recently. In a new interview with HRTV, Shania tells stories about the horse that appears in her video “Any Man of Mine.” Named Slick, the horse certainly stole plenty of hearts, including Shania’s. [Shania Twain Talks Horses]

Australian rider Elizabeth Sobecki is attempting to reach the 2014 World Equestrian Games. Her journey has not been an easy one, as she battles Multiple Sclerosis and Fibrous Dysplasia. After having to retired her Para Olympic mount, her hopes of competing at WEG and Rio seemed dashed until a new horse walked into her life. Check out the full story for more on this amazing rider. [Unbridled Determination]

Several horses in North Carolina were diagnosed with EHV-1 recently. Neurologic equine herpesvirus-1 (EHV-1) is not something to be taken lightly, and the affected facility has been quarantined while veterinarians work to reduce risk to other horses. [EHV-1 in North Carolina]

The best trained horses you will see today.