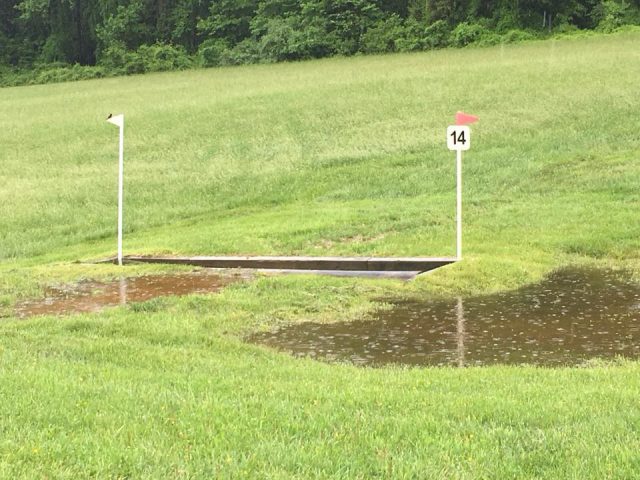 The rain on the east coast this week has been insane. So much so that Fair Hill has announced that they’ve cancelled the event this weekend, because it is literally under water. However, don’t despair! The Virginia Horse Trials (May 24 – 27) and Waredaca (June 2 – 3) have both responded with a very generous offer to all competitors hoping to get a run in by waiving their late fee and accepting entries to their event next weekend for the disappointed people entered at Fair Hill. Way to go, VHT and Waredaca!

Well, it’s gonna be a wet Preakness this weekend, but we already know that Justify likes the mud. The unbeaten colt trained by Bob Baffert seems to have recovered from his bruised heel following his Kentucky Derby win, and several of his previous challengers have dropped out of this second leg of the Triple Crown. Drawing post number 7 (same as he did at the Derby), he’s the overwhelming 1-2 favorite, with the only seeming contester being Good Magic at 3-1. [Preakness Draw: Odds, Contenders and Post Positions]

A fun game to play: could eventing champions of the past make it in the current format and competition? In 1994, Dorothy Trapp and the OTTB Molokai came home from The Hague with an Individual Silver medal from the WEG, only a few time penalties on steeplechase holding them back from gold. However, Molokai was not known for his dressage, so could he make it in modern day eventing? COTH goes back in time to find out. [TBT 1994 WEG]

Schramm Sesh of the Week

Jimmie and Dom Schramm have teamed up with Kentucky Equine Research to provide an inside look into their conditioning program using KER ClockIt Sport. Each week we’ll share an example ride and some notes of what the Schramms look for as their horses progress.

This week, Jimmie is prepping Eclaire for her first CCI1* at Bromont, which takes place June 7-11. This session is the seven-year-old German Sport Horse’s first real hill gallop.

“I did not push her as much as I could have,” explained Jimmie. “I wanted to get a baseline for her on how she felt doing these two intervals up the hill.”

“Her heart rate hit the zones I wanted them to, and she recovered quite quickly,” Jimmie pointed out. “She did very well and it did not seem to take much out of her.”

“All of the information is good to know for training going forward,” she said. “I think next time I will take her up an extra time, or go to Nelson’s Hill which is just a longer hill.”

Check back next week for another Schramm Sesh! Want to gain insight into your horse’s fitness? Try KER ClockIt Sport. The free app helps take the guesswork out of equine fitness by monitoring heart rate, speed, distance and altitude during rides.