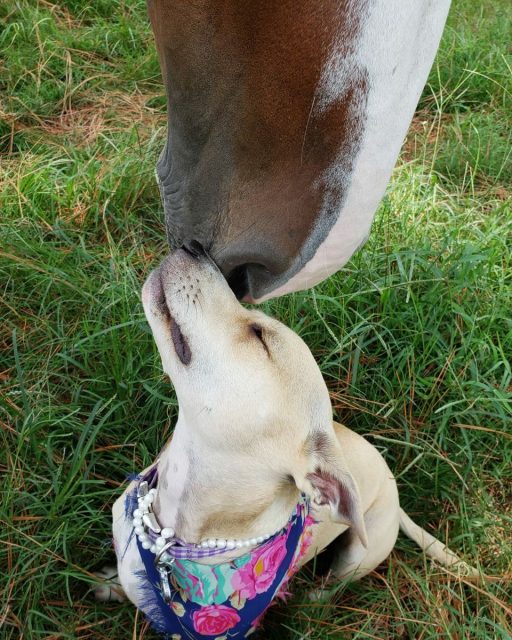 Margaret the dog is SO fashionable I can barely stand it. Photo by Whitney Weston.

Today is jump lesson day for me! I don’t have the opportunity to have lessons that often, so going for a day to have jump lessons is a real treat. Also, I get to jump my baby head Turkey, and he’s maybe the most fun I’ve ever had on a horse for jumping. He’s so well naturally balanced, and refreshingly not spooky about different kinds of jumps, which is a delightful breath of fresh air considering most of the horses I’ve had are ten million more times complicated. Super pumped!

The USEF finally named the Show Jumping Team for the WEG! Featuring several oldies (but goodies) and two newer faces, we’re hoping for great things from this team. Laura Kraut with Zeremonie, Devin Ryan on Eddie Blue, Adrienne Sternlicht on Christalline, and McLain Ward on Clinta and HH Azur round out the team, with Beezie Madden and Darry Lou named as the traveling reserve. [USEF Names Show Jumping Team for WEG]

Oliver Townend is fighting back from his exclusion from the British team with five entries to Burghley this fall, including defending champion Ballaghmor Class. He’ll have to narrow it down to three of course, but let’s just say he’s got a fairly good chance of showing BE what’s what and taking the title for the second year in a row. Also, he’s been drawn AGAIN to be the first in the order of go, which ironically has happened to him more often than not. [Ollie Townend to be Trailblazer at Burghley]

The Thoroughbred Aftercare Alliance will introduce a new award to honor the highest-placing TAA graduate and the TAA-accredited organization affiliated with that horse at the Retired Racehorse Project’s $100,000 Thoroughbred Makeover, presented by Thoroughbred Charities of America. The award, which will be a $1,500 cash prize and other gifts, will be divided between the rider of the highest-placed TAA horse and the TAA-accredited organization that rehomed or is in the process of retraining that horse. [New TAA Award for RRP 2018]

It’s time for the Horse & Hound 2018 Awards nominations! With eleven categories, H&H is accepting nominations for any person, horse or group that you believe deserves recognition. A shortlist will be announced in October for online voting, and the winners will get to participate in a star studded ceremony at Cheltenham Racecourse in November. [Nominate for H&H Annual Awards]

Kentucky Equine Research is the Official Equine Nutritionist of the FEI World Equestrian Games™ Tryon 2018 (WEG). They coordinate the ordering, shipping, testing, storage, delivery, and overall logistics of getting familiar feeds from around to world to the horses competing in Tryon. Along with shipping feeds from around the world, they’ll also provide items available for purchase on the venue on an a la carte basis. From managing this role at previous events, they know one item that will top the request list: Tons of carrots. (Literally. Many tons.)

For example, Olympic horses in Hong Kong consumed an incredible quantity of carrots. More than 11 tons of fresh carrots imported from New Zealand and Australian were fed over the course of the competition, averaging around 5 lb per horse per day! At WEG in 2010, competing horses munched through more than 13 tons of the crunchy treats.

To stay up-to-date with the latest on with the WEG feeds and forages crew, visit https://ker.com/equinews/news/weg/.