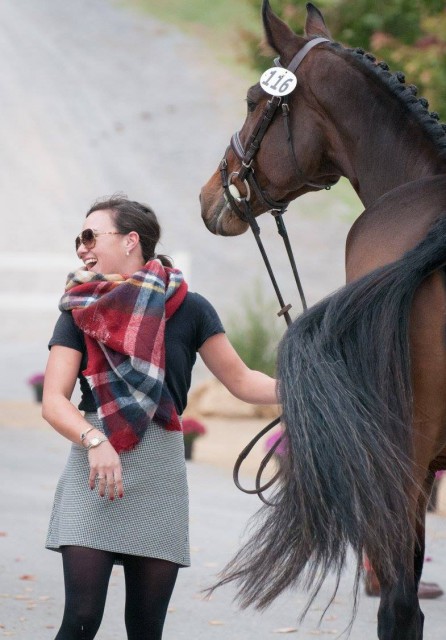 The Virginia Horse Trials will forever be my “hometown” event, even though I live over the mountain from the Horse Center. The Virginia Horse Center is where I did my very first unrecognized eventing competitions as a wee child on a variety of naughty ponies, and where I really learned the passion for cross country. I grew up riding on the kind of terrain you find at this event, so I always thought, what’s the big deal? And then I grew up and started riding at events where mountains aren’t included in your course, and realized why other people find it so daunting. The terrain at VAHT is part of the glory though, and it will always remain one of my favorite rollercoaster rides to partake in.

We live and breathe the half halt in Eventing, on a number of levels, however it’s not something that an OTTB is familiar with immediately. Without the half halt, you basically can’t do anything in any of the phases, so it’s important to introduce it and explain it properly to your little ex-racehorse. Upper level rider Whitney Weston operates Southern Pines Riding School in addition to helping many OTTBs find second careers, and speaks about how she integrates understanding of the half halt into her training system. [Introducing the Half Halt to Your OTTB]

Alice Dunsdon’s four-star partner Fernhill Present is recovering from an emergency surgery following an unlikely accident while out fox hunting this week. Hilly and Alice were out hunting when he slipped going through a gate and his hind end went into a ditch. He had only a small cut on his hind fetlock, but it turned out to have gone right into the joint and caused an infection. Quick action and surgery has assured Hilly a good recovery, and more four stars in his future. This pair has completed five of the world’s six four stars together. [Popular 4* Horse Recovering from Surgery]

Are you ready for the winter months? EN blogger Emily Daignault-Salvaggio gave us all a comprehensive guide of things to get done before the snow and ice set upon us for months to come. Seriously, its a list to end all lists, so grab some tea and have a seat. [Ultimate Guide To Winter Preparedness]

You know how those little details in a barn make a big difference but you wouldn’t notice until you have them? This Safe-T Salt Block Holder is one of those things that you don’t know you love until you have it in your barn. The barn where I work got them for all the stalls and I just can’t tell you how cool they are. Plastic with a solid backing, they don’t rot your walls with salty saliva goo, they don’t rust like the regular holders do, and they’re sleek and handsome when you mount them on the wall. When you have an aggressive salt licker, the salt doesn’t disintegrate and fall on the floor because this little beauty holds it all in. You gotta get you some. [SmartPak Product of the Day]

Throwing it back six years….