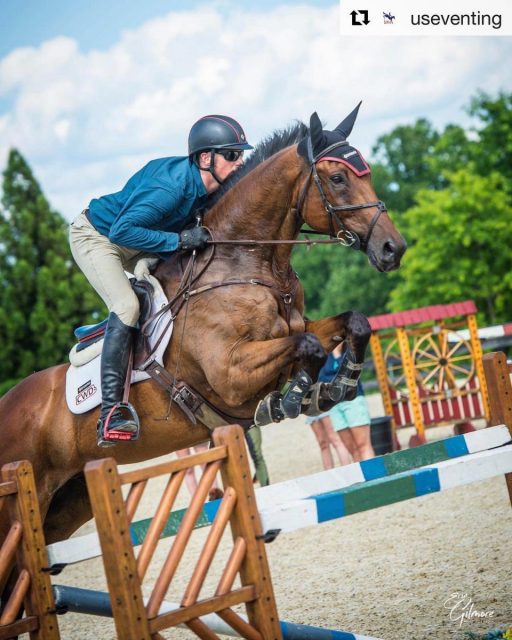 Doug & Quinn at Pan Am practice sessions. Photo via US Eventing.

Hope your horses and dogs survived July 4th and all the fireworks! I celebrated America the best way I know how, by riding a whole pile of American thoroughbreds!! I did dressage, jumping, hacking, trotting, and splashing in rivers with all the Thoroughbreds, and it was a great holiday.

Tamie Smith knows a thing or two about the highs and lows of the sport. This year she’s had a horse go magically lame walking to the jogs at Badminton, go sound two days later, re-routed to Burghley, been named to the Pan Am and Nations Cup Teams, withdrawn her Pan Am horse for a minor injury, substituted her previous 2016 Olympic horse after he’s come back from injury two years ago. A whirlwind to say the least. How does she deal with the mental game? [Learning To Let Go Has Changed The Way I Deal with Disappointment]

Paulank Brockagh galloped into our hearts at the 2014 Badminton, where she won in some of the worst conditions in recent memory. Brocks is a war horse of a mare, finishing in the top ten of all of the European five-star events, and she’s not slowing down at the age of 16, adding a 7th place recently at Luhmühlen. Her rider, Sam Griffiths, is keeping his eyes on the 2020 Tokyo Olympics as her final goal, and treats her like the queen she is. [Behind the Stall Door: Paulank Brockagh]

Is scraping water off your horse *really* that important to cooling them down? One scientist says no, and you’re not going to make your horse boil by leaving water on them after you wash them off. In fact, he says that continuous application of cold water will do more to cool off a horse than washing and scraping. [Popular Washing Myth Busted]

Best of Blogs: Close Encounters of the Wild Kind