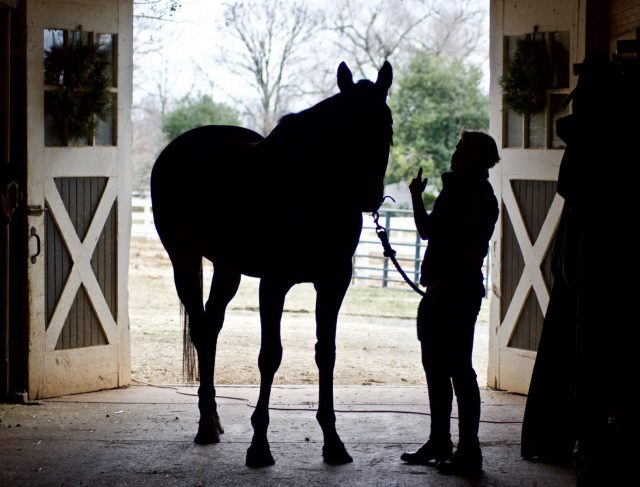 Sometimes I do fun pony photoshoots. Photo by Kate Samuels.

Yesterday I met with a local event rider friend of mine (haaaay Lara) about the two of us taking over the organization of an unrecognized combined test that a farm down the road hosts every year in March. I’m doing the dressage judging and helping with the organization and promotion and stuff, and woah, I’m already impressed with how much work it is just to put on a little local show! Seriously, god bless people who do this for big shows and do this professionally, hug your local organizer and bring him/her flowers and chocolates next time you go to compete.

You want a heartwarming story of a girl finally realizing her dreams and getting a giant puppy dog OTTB despite the odds? Noelle Floyd knows what you want, and they’ve got you covered. Sarah McGovern is a delightful young lady who lives right down the road from me in Charlottesville, and has been dreaming of owning a horse and living her horsey daydreams for her entire life. Despite battling cystic fibrosis every day, Sarah manages a local eventing barn and is competing her enormous sweet Thoroughbred gelding, Leo. [Noelle Floyd Feature: Sarah McGovern]

Before Todd Minikus was a household name in the show jumper world, he was just another guy riding a $1,000 OTTB. The difference was, he was riding that thousand-dollar Thoroughbred and winning all the grand prix classes with him. Thrilling was a 1980 grey Thoroughbred gelding that Todd bought sight unseen as he was out of the same mare as his previous grand prix mount. The gelding won enough in prize money for Todd to buy a truck, a trailer and go on to become a professional rider. [An OTTB Named Thrilling]

Ponies have officially hacked the system: they’re now traveling by human drawn carriage. That’s right, humans pulling ponies. And no, I’m not joking. This spring, Emma Massingale will be pulling two mini ponies across Europe in a specially adapted tricycle, from Switzerland onwards. Stanley and Percy the ponies will be in the back, along with the dachshund. [Human Drawn Pony Carriage Across Europe]