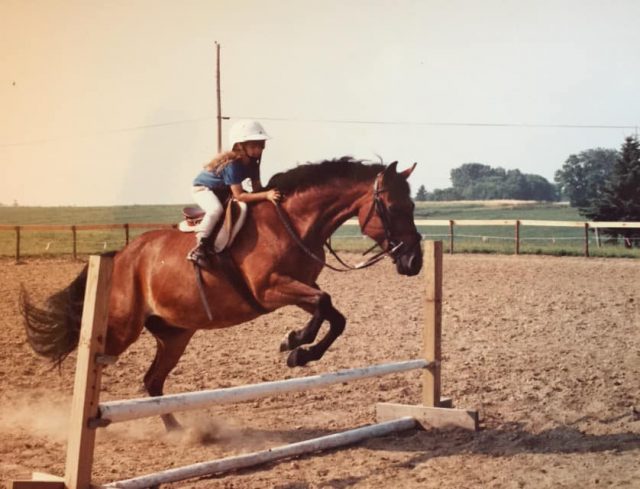 I never got to compete this spring before the cancellation of everything, so it’s been a really long weird winter season for me, only slightly improved by the generally good weather and good horses. Let me tell you though, a cold snap with rain and freezing temperatures this week has really brought my spirits down, and I did not want to have to dig out all my winter sweaters and coats again! C’mon mother nature, cut me a break here, it’s almost June!

Have a Sport Horse Nation matchup success story? Send a photo to [email protected] to be an upcoming EN banner ad cover model. Faraway shots are the best as it’s a long, skinny banner ad. This week: just to get the ball rolling, we’ve got a pic of EN editor Leslie Wylie with her SHN perfect pony match-up, Princess. [Sport Horse Nation]

As the horse world slowly opens up, racing has announced that the Belmont Stakes will run on June 20th. Usually the last and longest leg of the Triple Crown, this topsy-turvy year will feature the Belmont as the first leg, and slightly shorter at a mile and an eighth. The purse has been reduced to $1 million and no spectators will be permitted. The Kentucky Derby is slated for September 5th, and the Preakness for October 3rd. [Belmont Stakes Rescheduled for June]

Using your time at home to make a personalized musical freestyle? Or maybe just an awesome TikTok? Either way, finding the perfect music for your horse’s rhythm is no mean feat. With this guide, you’ll be on your way to creating that viral video in no time. [How to Match Music to Your Horse]

Best of Blogs: Your Horse Community Will Have Your Back in a Crisis