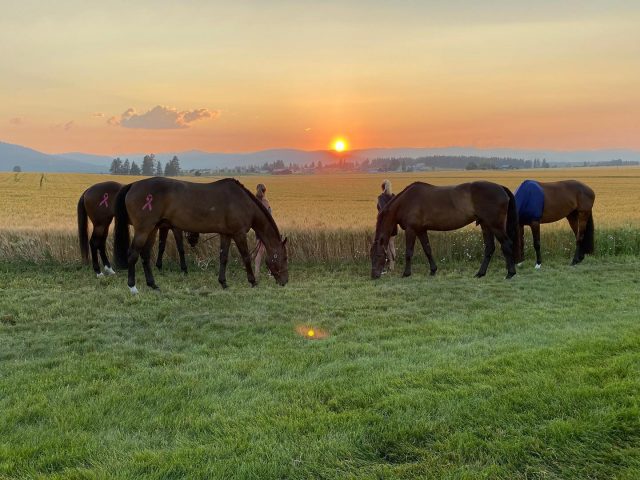 One day, I keep telling myself, I’ll make it out to Rebecca Farms for their summer horse trials. Maybe I won’t have the gumption to drag my horse halfway across the country (especially as my current horse has a tendency to scalp himself on long journeys) but perhaps next year I’ll go for the reporting. And the sunsets. And the overall vibe. Rebecca Farms 2022!

Michael Jung made Eventing history by becoming the first to hold the European, Olympic, and World Championship titles at the same time. Now, he has his sights set on an individual hat-trick in Tokyo, partnered with Fischer Chipmunk, and we all know he won’t leave anything on the table. Only two other riders have won two Olympic titles in Eventing, Charles Pahud de Mortanges won both Amsterdam 1928 and Los Angeles 1932 riding Marcroix, and Mark Todd won Los Angeles 1984 as well as Seoul in 1988 with the legendary Charisma. Can Michael Jung beat ANOTHER world record and win three Olympic gold medals?? [Tokyo 2020 Eventing Preview]

Lack of riding time is a common complaint among adult amateur equestrians. Between professional careers, family commitments, and an often-overwhelming number of other responsibilities, riding for a short time, even a few days a week can be tough to fit in. But, even if you only have a short time to devote to working with your horse, there’s a lot that can be accomplished in less than an hour with some longeing and riding exercises. [7 Riding & Longeing Exercises For A Time Crunch]

Does Phillip Dutton feel extra pressure with the added mantle of being the oldest American at the Olympics? Nah. Pretty much standard stuff for him. In his seventh Olympic appearance, Phillip won an individual bronze at Rio in 2016, making him the oldest American medallist since 1952. He credits his longevity to his dedication to core strength and balance. [Team USA’s Oldest Olympian]

Best of Blogs: We Have To Fix Our Audience Problem Before We Can Fix Our Sponsorship Problem

HORSE FIRST know that finding the right supplement can be difficult. Whether you’re looking for a calmer horse, stronger hooves or supple joints, you’ll be sure to find what you’re looking for within our product range. HORSE FIRST use only the highest quality active ingredients and are renowned for being some of the most tailored and advanced supplements on the market – Made by horse people for horse people.

International Dressage rider Abi Lyle has been using Horse First Products on her horses. Read what she has to say about…