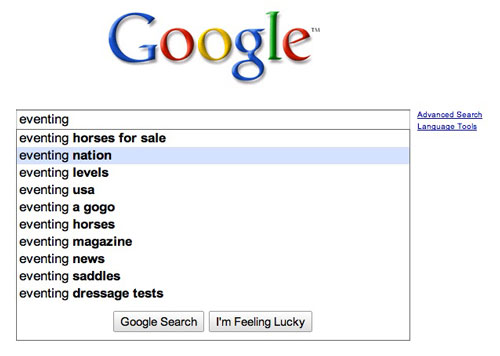 An explanation of the new drug rules from the great Kent Allen
For the latest on Rebecca Howard, check out Sinead’s blog, which explains that Thursday was a struggle but that Rebecca got two carts of flowers.  Rebecca’s blog is starting to post updates as well.
Alex Hua Tian is counting down to the start of the season in his latest blog entry.
Buck Davidson is now blogging.  Buck really had his coming-out party last year and he has a lot of great things to say about our sport, so I hope this is a way for him to assume more of a leadership role in eventing.

–As a quick note from Buck’s entry, I’m intrigued by the fact that, according to Buck, PRO advises show organizers on what dressage and show jumping judges to hire: “Another important part of PRO is helping event organizers decide on which officials to hire…”  An organization of select riders influencing which judges are hired by competitions seems like it might potentially create a slight conflict of interest.

Courtney King-Dye is still in a coma and doctors do not know when she will wake up.  The Jurga report has more information on fundraising efforts.  Dressage Daily writes about possible prayers for Courtney.
Our friend Jackie at Regarding Horses explains the WEG show jumping selection procedures.  I love the idea of results determining the short list because it seems much more fair and bias free.  But, this system would be nearly impossible for eventers due to the massive influence that team vets have on selection, and the fact that eventers have fewer competition rounds each spring.  Also, it would encourage people to run their horses too fast early in the spring, etc.
A chink might have been exposed in the van Grunsven armor as Anky misses World Cup finals.
WM: Overcoming maggots in the mind
There are 85,500 farms in Kentucky.
Jockeys in England are waxing their legs to reduce air resistance raise money.
Win a video contest and you might get to work for Purina during the WEGs
0 0 votes
Article Rating
Subscribe
Login
Please login to comment
0 Comments
Inline Feedbacks
View all comments
More Insanity on Horse Nation >>