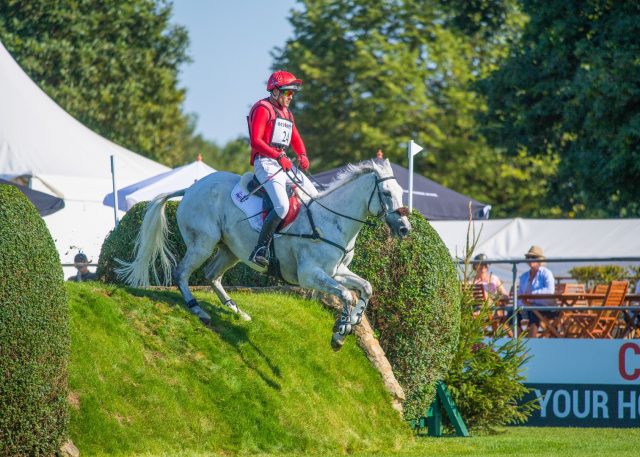 Paul Tapner and Bonza King of Rouge make easy work of the International arena’s varied terrain to take the win in the MS Amlin Eventers’ Challenge. Photo courtesy of the All England Jumping Course, Hickstead.

It’s a short, sweet, and exceptionally late Friday video for you all this week, chums, as I’ve just spent the better part of two hours chillin’ on the side of the motorway with one very sad, very immobile Peugeot. It sounds like it could be the beginning of a Journey song, but for the fact that it didn’t really result in a meet-cute, just a nice lady with a big rip in the bum of her pyjama bottoms scooping me up and taking me off in search of fuel. Yes, I stranded myself on one of the busiest roads in Britain on a Friday night because I pushed the limits of the little red light. I hang my head in shame.

Anyway, as a result, we’re going to cruise right on to the good stuff today – and what good stuff it is! We’re in the middle of the second Hickstead week of the summer here in the UK, and some of the world’s best showjumpers have descended upon the hallowed turf of the All England Jumping Course to battle it out for Nations Cup and Grand Prix glory. But it’s not all showjumping – yesterday, the eventers got involved, too. 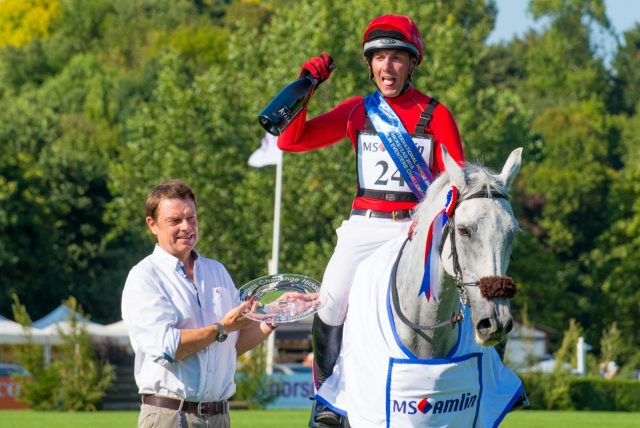 The MS Amlin Eventers’ Challenge is a fast and furious romp around the famous International arena, featuring a modified version of the Derby bank, a devil’s dyke, and a twisty, turny, madcap course of obstacles. This year’s competitors included four-star eventers Georgie Strang and Imogen Murray, as well as up-and-comer Will Rawlin and last year’s winner Paul Tapner.

It was Tapner’s turn to triumph again, riding his four-star mount Bonza King of Rouges.

“I’ve had the last 12 months to prepare myself. I knew exactly how fast I went last year and I knew exactly how much faster I was going to go, and how many fewer strides or extra strides I was going to do between various fences. It was that calculated,” said Taperz, who refers to himself as an ‘elite amateur’ these days, as he spends much of his time working for the Event Rider Masters series.

It doesn’t look like the necessary scaling back of rides has diminished his ability to ride to the clock while under pressure – check out how his round played out, and what he had to do to steal four extra seconds on runner-up Georgie Strang‘s time:

Once, twice, Tapner's a winner: Paul Tapner and Bonza King of Rouges win the MS Amlin Eventers Challenge for the second year in a row.#Longines #Hickstead #SupportYourNation #Safety365

Posted by The All England Jumping Course, Hickstead on Thursday, July 26, 2018