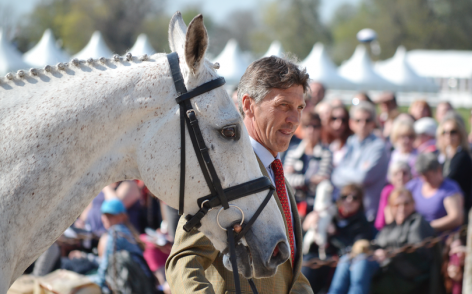 Horse & Hound reported this morning that Andrew Nicholson and Wiggy Channer tied the knot last weekend. Together for more than a decade — since Wiggy left former husband William Fox-Pitt, which sparked eventing’s fiercest rivalry — they have two children together, Lily and Zach, who also ride. Congrats to Andrew and Wiggy!

Andrew Nicholson and his long-term partner Wiggy Channer got married in the UK last weekend.

The couple live together near Marlborough in Wiltshire and have two young children, Lily and Zach, who both enjoy riding.

Andrew, 52, enjoyed a phenomenal 18 months of competition from September 2012 until the end of last season, winning four CCI4*s on four different horses (Burghley 2012 on Avebury, Pau 2012 on Nereo, Kentucky 2013 on Quimbo, Luhmühlen 2013 on Mr Cruise Control).

If Jock Paget is stripped of his Burghley title after the upcoming FEI tribunal into a failed dope test, Andrew is also in line to collect this first prize. Should this happen, the Barlows’ Avebury would become the first horse to win the autumn 4-star twice in a row.