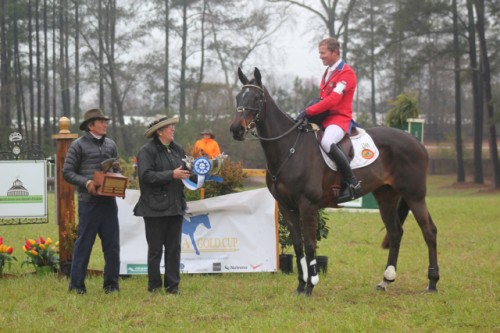 Horse & Hound published a brief article today noting the creation of a new Twitter account — @EPrizemoney — that highlights the growing demand for prize money at events. Sounds like a good thing, doesn’t it? Prize money at events is relatively unheard of in this country; outside of the AECs and major international events, few horse trials in this country have much prize money available. Across the pond, riders are making a push for more prize money, and the Twitterverse is doing its part to help.

Sir Mark Todd tweeted, referencing the account: “Off eventing. Just calculated that even if I win on all three horses, skip lunch and pre-diesel, my loss will be £98.31 — crazy!”

But as three-star rider Tom Rowland pointed out to H&H: “It’s not just about making a stand, it’s about finding a solution. The money has to come from somewhere. Many events barely break even — or run at a loss — so unless the sport can get a huge boost in income [from sponsorship], there remains no obvious answer.”

Paul Tapner added: “I don’t want a rift to be created between the various factions in the sport, but British Eventing [BE] needs to be more proactive. Nowhere in its business plan does it say that it is trying to increase the financial viability of the sport and that worries me.”

British Eventing is working on adding more prize money to its events for 2015. I wonder if the USEA could follow suit? Currently, there are 11 U.S. Advanced events that are part of the Adequan Gold Cup series, where winners receive $500 in prize money and a seven-dose box of Adequan, among other prizes. The winner of the Adequan USEA Gold Cup Final at the American Eventing Championships will take home a large chunk of the $40,000 in prize money, $1,150 in Nunn Finer products, a Mountain Horse Gold Cup Champion jacket and many more prizes from the AEC.

It certainly would be nice to take home a bit of cash for a top placing, perhaps just even winning your entry fee back. With the ever-increasing cost of eventing, rewarding success at all levels could help encourage participation and allow successful competitors to continue participating in the sport they love with a little less pain in the pocketbook.