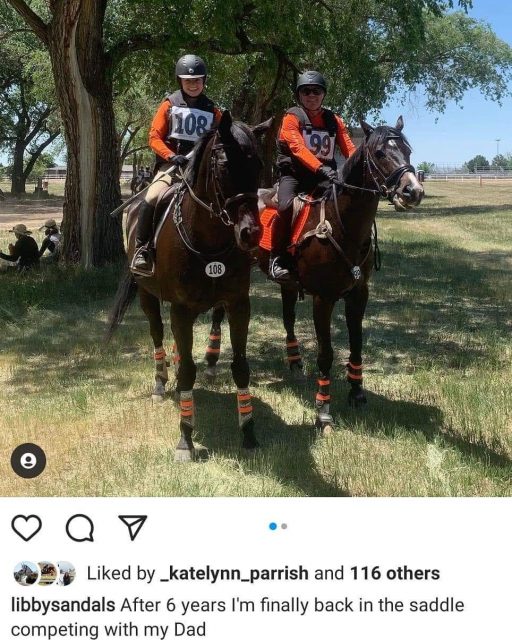 Clay Sanders got his introduction to eventing like many other horse show dads – his daughter Libby joined Pony Club, was then introduced to the sport, and came home one day full of enthusiasm to become an event rider. Libby’s first attempts at eventing with her Haflinger left something to be desired … so the family purchased an off-track Thoroughbred with the help of Libby’s trainer, Erin Storey of Storey Tails Eventing in Boise, Idaho. The tall, dark brown gelding named So Gone never knew what was in store for him when he joined the Sanders family!

Libby and So Gone evented successfully in Area VII for a few years, and Clay was the ultimate horse show dad and volunteer. Then Libby paused riding to attend college. For a short time, Libby’s sister rode So Gone (he never did get a barn name, by the way), and then the family leased him to another young rider, but ultimately, he was hanging out in the pasture. Clay, who is an avid mountain biker and had ridden horses while hunting wildlife, had no experience with dressage or jumping. Naturally, it made sense for him to take up the ride on So Gone himself … (did it though??). Clay was matter-of-fact when he told me, “So Gong was languishing now in a in a pasture. How do you make the temperature of a room decrease by 40 degrees just like that? You tell your wife … I’m going to be a three day eventer. I’m riding that horse. At Rebecca Farm.” 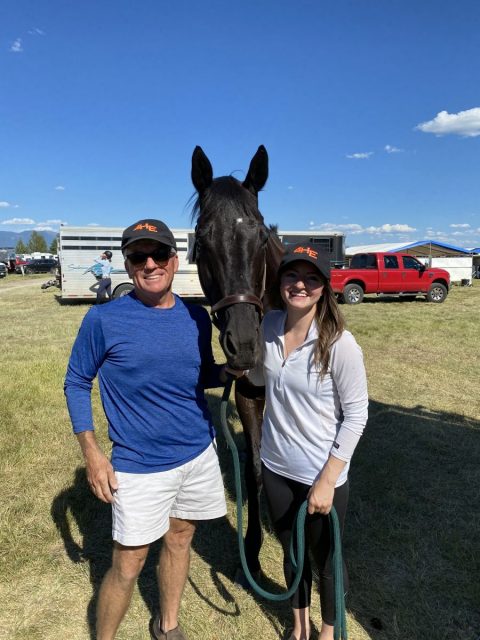 Clay & Libby with So Gone. Photo by Erin Tomson.

Clay went on to say, “I hunted with that Haflinger for five or six years… now there is walking on a horse, and then there is riding on a horse. I didn’t understand the difference when I said I’m going to be an eventer and ride at Rebecca Farm.” Clay decided to take a lesson with Gary Mittleider because he felt like he could connect with another guy who rides. “I walk out there and tell him I want to ride at Rebecca next summer …it was like October so it would have been another seven months [until the event]. And I went out there in jeans. And that man kept a straight poker face. And me … it took me a little while to realize that it was gonna be a while to get here [to Rebecca Farm]. And a lot of pain. And a couple hundred dollars in those CO2 cartridges.”

With the goal of completing The Event at Rebecca Farm, Clay began training in earnest. I don’t think anyone really kept track, but Clay fell off … a lot. And he continued to get back on and try again. With his hunting background, it made perfect sense for Clay’s cross country color theme to be hunter orange. The Storey Tails team jokes that Clay is an “orange-ologist” because he has collected so many bright orange items of clothing, saddle pads, helmet covers, etc.

They also regaled me with the hilarity of Clay’s first recognized event at Spokane Sport Horse Farm in Spokane, WA. During his cross country warm-up, he promptly fell off at the first jump he attempted, so they quickly sent someone back to the trailer for a new CO2 cartridge for his air vest. A few minutes later, another incident resulted in Clay touching down again, just minutes before he was due on course. But he managed to get back on and out of the start box, and ride successfully around the course! Although he wasn’t seriously or permanently injured, Clay was certainly feeling it the next day, but completed his stadium jumping round thanks to sarcastic cheers from him team. 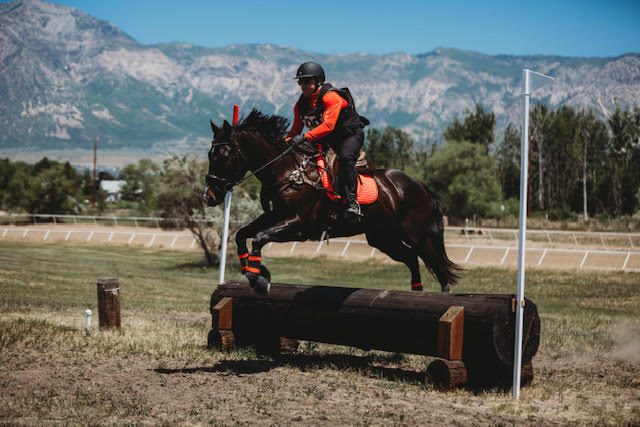 Joking aside, the Storey Tails team members are incredibly tight and supportive of each other. They have helped Clay throughout his road to Rebecca Farm and are incredibly proud of his hard work, determination, and improvement. It has been approximately four years since Clay decided he wanted to ride at Rebecca Farm and he’s had his coach and team behind him all the way. Clay puts orange duct tape on So Gone’s boots for cross country, and the team all signs their names on the tape before he goes on course. His daughters aren’t typically with him at the events these days, so Clay writes their names on the tape himself. However, Libby was able to make the trip to Rebecca Farm this year to cheer on her dad as he went for his ultimate goal. 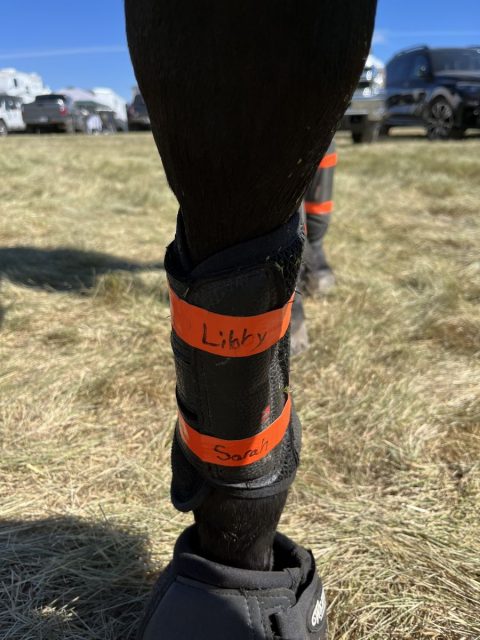 Clay also has another horse coming along now, and he was absolutely thrilled to compete alongside Libby in the same division at Golden Spike Horse Trials in Utah. “Libby hadn’t ridden for six years or done a recognized event [in a long time]. She and I were in the same class, and she was on So Gone; I was on my other horse. Kid wins it!” The two horses look very similar to each other, and with Clay and Libby both decked out in bright orange, it’s hard to tell them apart! Clay spoke very proudly of his daughter and the fact that the two of them could do the same sport together after so many years. He also advocates for how our sport provides an opportunity for young people to develop confidence and resilience. 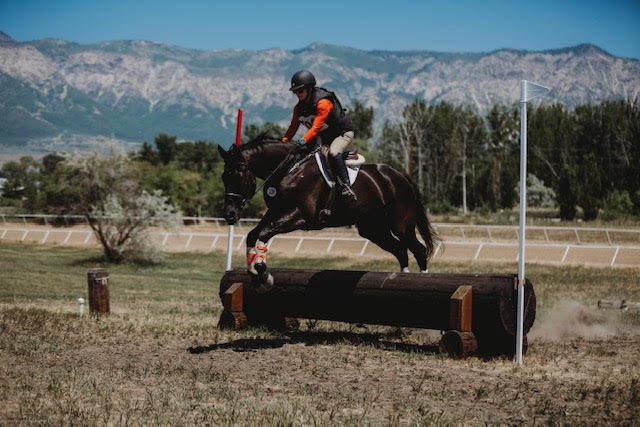 Libby over the same jump at Golden Spike. Photo provided by Clay Sanders.

I’m extremely happy to report that on Friday July 22, 2022, Clay reached his goal of completing The Event at Rebecca Farm! He and So Gone finished in 13th place on a final score of 72.6. Congratulations, Clay, on working hard and making your dream come true!

Clay encourages other dads to try it out (he says he needs more old dudes to hang out with) and that if he can do it, so can others. “I guarantee you, there are a lot of dads out there that have watched their daughters kind of go through what I did. And then all of a sudden they’re stuck with a horse. Give it a try, Dad. Yeah. Live life with your leg on! Give it a try.”