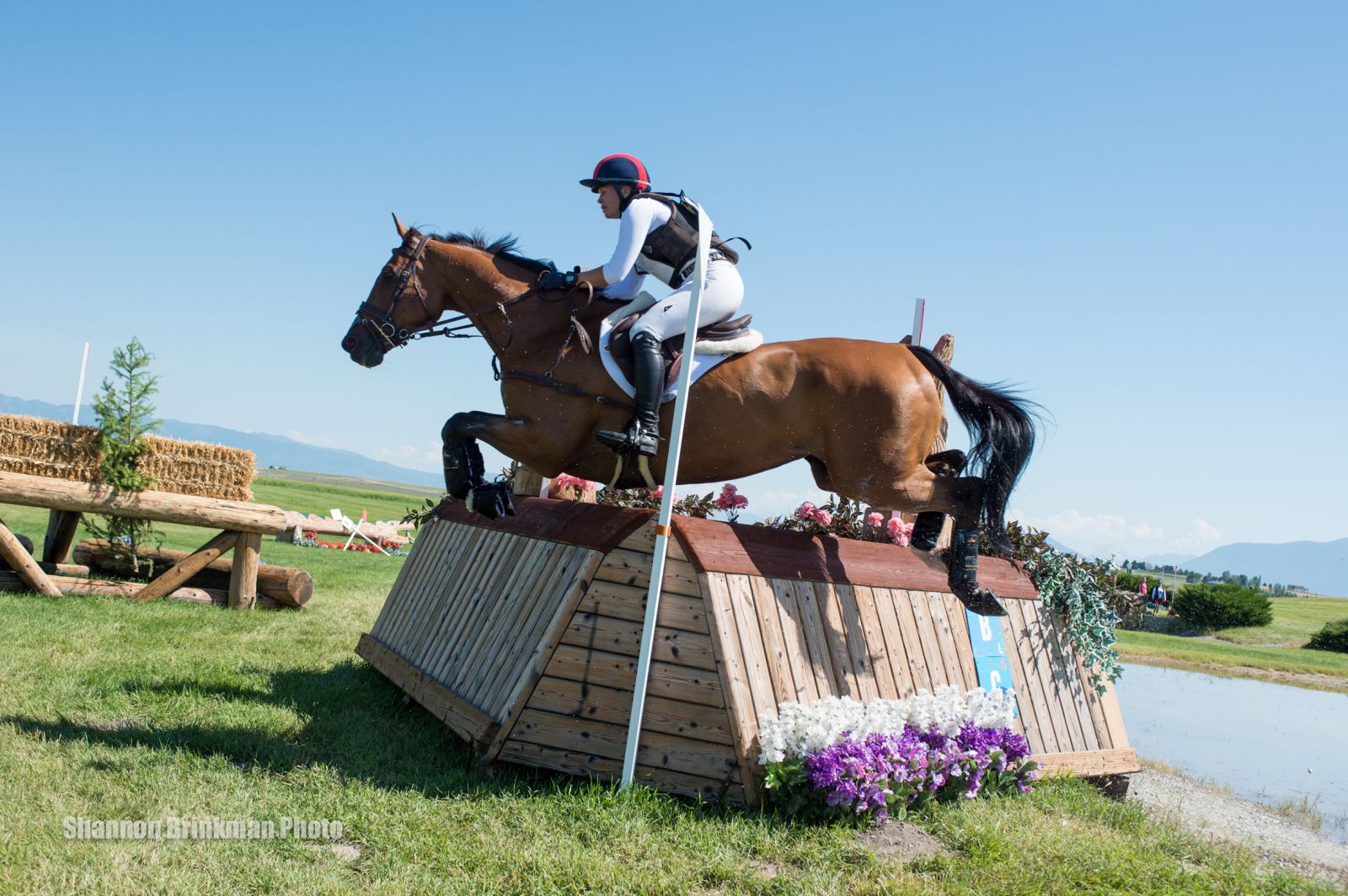 Alyssa Phillips and Oskar take the lead in the 4*L. Photo by Shannon Brinkman Photography.

The FEI cross country kicked off on another absolutely beautiful morning at Rebecca Farm, where the FOMO and mountain views abound. Ian Stark’s course had a different feel to it this year, running in the opposite direction of recent years’ tracks, but also carried that distinctly, dimensionally huge feeling that likely had many riders tossing in their sleep a bit last night. It’s an Ian Stark signature, after all.

Time proved to be the most influential factor, with few pairs managing to elude time penalties across all FEI divisions and jumping penalties scattered throughout.

CCI4*-L: Alyssa Phillips Moves On Up

Alyssa Phillips and her 13-year-old Holsteiner Oskar, winners of the inaugural Lexington 4*-S in 2021, moved into the top spot in the CCI4*-L thanks to a rare double clear round to maintain their dressage score of 31.4. This was Alyssa and Oskar’s second CCI4*-L, but their first time at Rebecca Farm.

Alyssa said he was really good out there and, following advice from Jennie Brannigan, “I never took the foot off the pedal because he’s not the quickest horse of the bunch. But he did everything that I asked and I couldn’t be happier with it.” 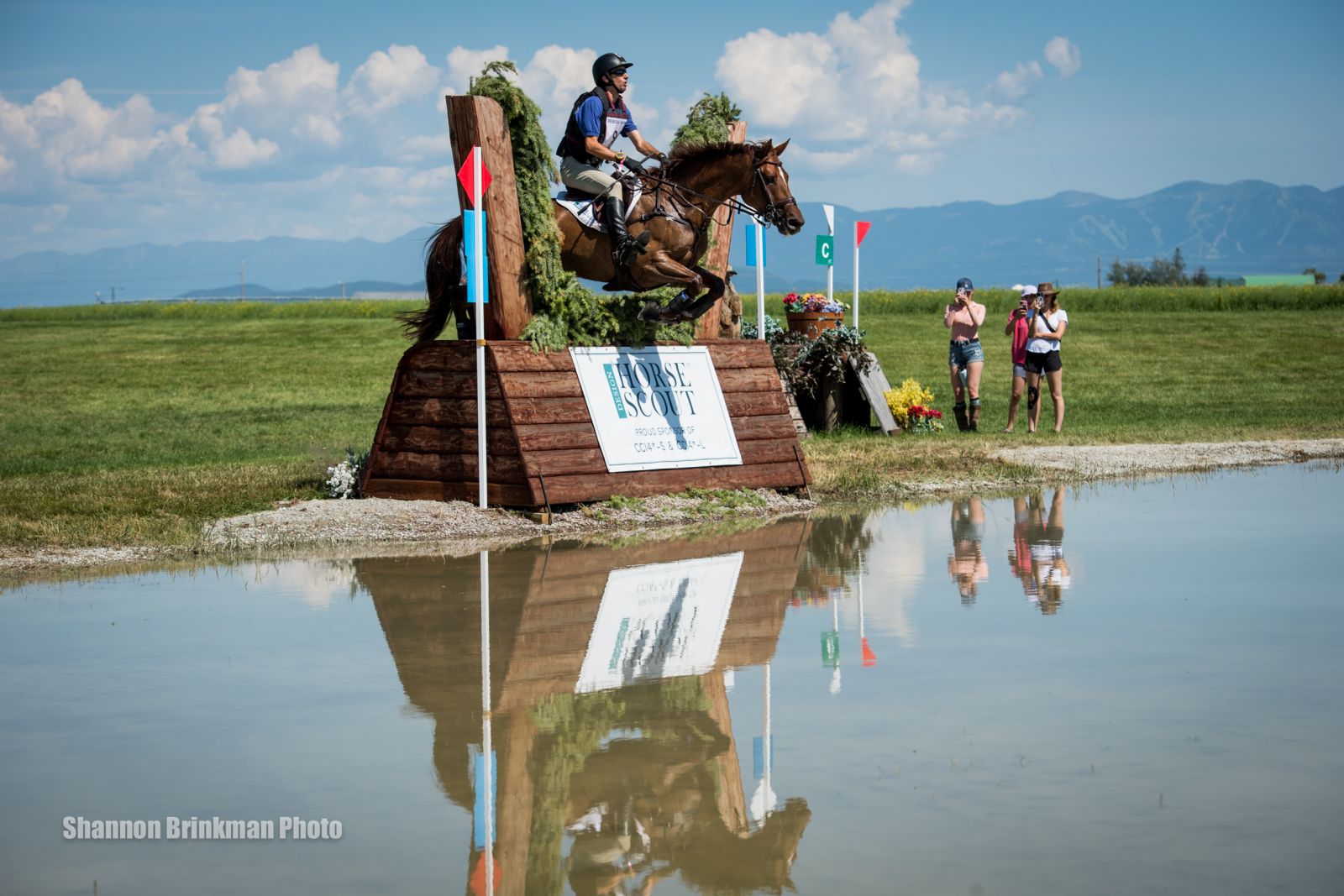 James Alliston and Nemesis step up to another challenge. Photo by Shannon Brinkman Photography.

James Alliston and Nemesis, an eight-year-old Canadian Warmblood gelding owned by Alliston Equestrian, jumped clear and added only 0.8 time penalties. As a younger horse, this was the longest and most challenging course Nemesis has taken on so far, and James was “really happy with how he did it.” The sporty chestnut certainly has stepped up to each challenge presented to him this year: this spring, he and James finished on the podium of the notoriously-tough Lexington 4*-S — a culmination to a trip the gelding wasn’t even originally slated to be on! 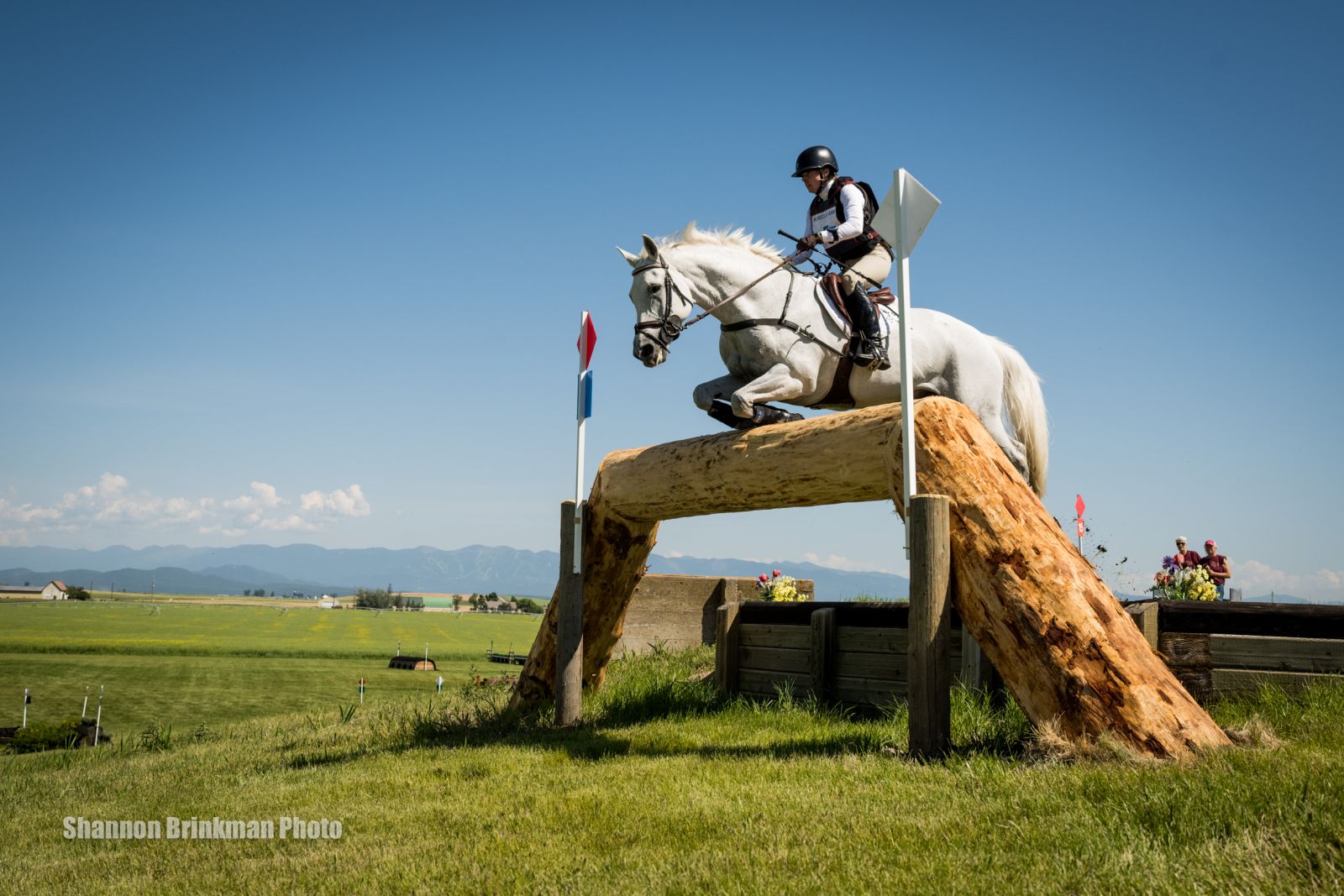 Helen Alliston pilots Ebay to a clear round. Photo by Shannon Brinkman Photography.

Dressage leader Helen Alliston sits in third with a score of 42.1 on her 13-year-old Oldenburg gelding, Ebay, after adding 13.2 time penalties to her dressage score. Helen jokes that she spent the morning trying not to throw up from nerves, all of which dissipated once she left the start box. She made an effort to allow Ebay to go at his own pace today because it was his first CCI4*-L in four years.

“I’m hoping the way I rode him today will kind of be a building block for next time we try this and we’ll be able to go a little bit quicker,” Helen commented. “But he answered every question beautifully and it was smooth.” Helen said she won’t be nearly as nervous going in the show jumping because “those jumps fall down,” — to which Alyssa commented, “fair point!”

Tamie Smith and the Elliot V partnership’s Elliot V were having a foot-perfect round until the combination at 17AB. Unbeknownst to Tamie, he’d pulled a front shoe and he slipped going down the hill to the B element. They made it through the flags, but Tamie had an unfortunate fall on the back side of the fence.

“I really believe in him and I think he’s stellar and an unbelievable horse,” Tamie said, open with her disappointment. “So I actually cried. I cried my little eyes out walking back to the finish. And I was so frustrated and the sport is so brutal, you know, but I just went and had a timeout, smacked myself in the head and went and got back on and had my plan. I mean, you’ve got to put it behind you and not ride different.”

Tamie — who’s also celebrating her birthday today — would regroup to secure clear rounds on her remaining rides: Julianne Guariglia’s Solaguayre California jumped clear inside the time in the 4*-S to sit second, followed closely by Ruth Bley’s Danito in third.

A quick shout to Thoroughbred That Could Unmarked Bills, who completed his first Long format cross country since Burghley in 2019 with longtime partner Chris Talley today and looked happy and fit to be back out running and jumping. Welcome back, Billy!

CCI4*-S: A New Partnership On the Rise

The budding partnership of Liz Halliday-Sharp and Miks Master C, owned by Debbie Palmer and Ocala Horse Properties, was put to its biggest test to date today; Liz and the 10-year-old Swedish Warmblood bred in the U.S. by Laurie Cameron and formerly piloted by Maya Black had just two previous runs under their belt. An easy win in a “get-to-know-you” run at Bromont’s 2*-L in June set Liz up to comfortably step back up to the gelding’s current level, and by the end of today’s cross country Liz looked to have learned a lot about a very exciting-looking horse for the future. 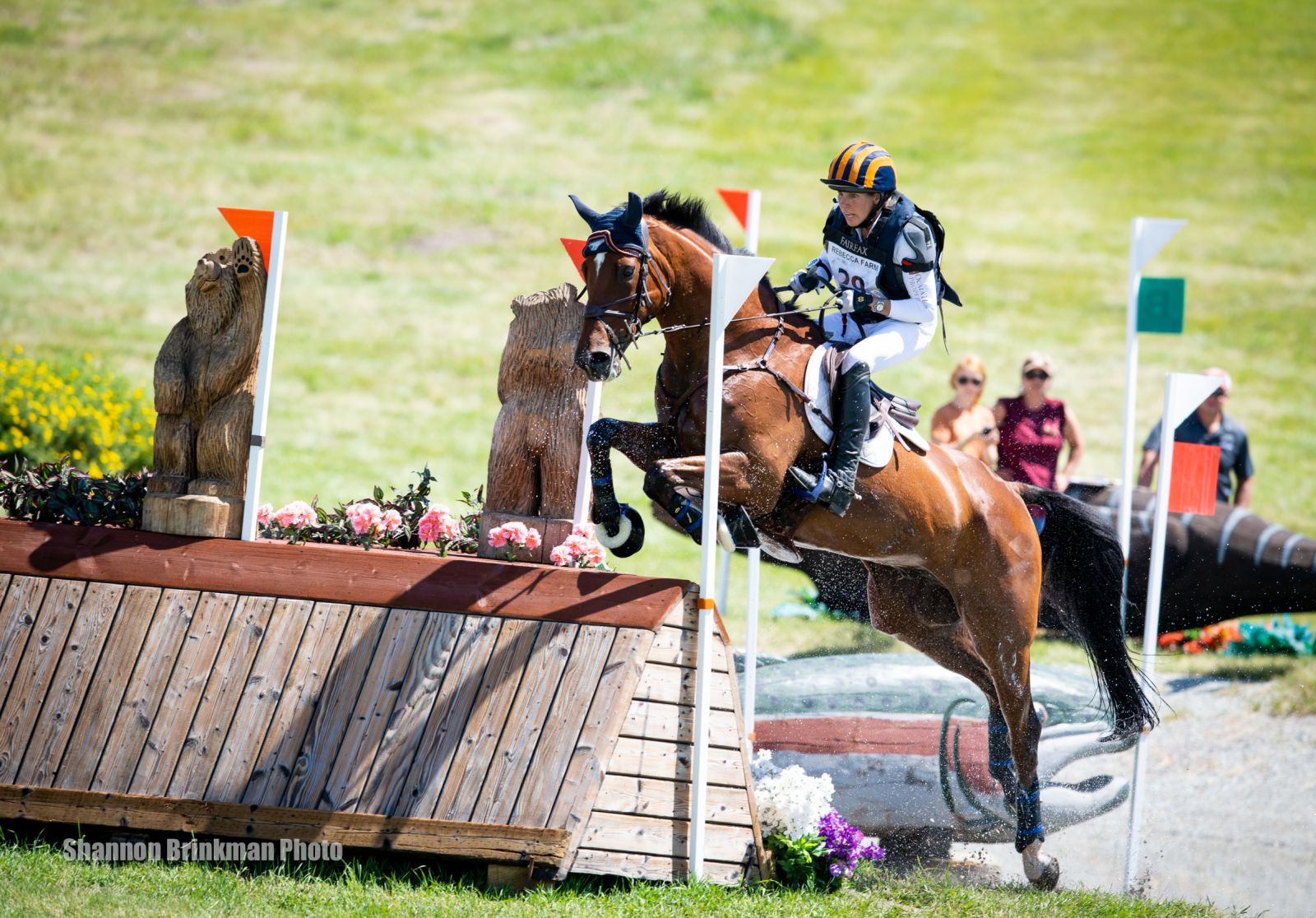 “He’s just brave and he’s fast, and he’s careful and he just knows his job,” Liz described. “And he has such a big, giant, amazing stride that you can just cover the ground. I really enjoyed it today. I’m very excited about our partnership.” Liz is hopeful for a clear show jumping round on Sunday. “It’s just great to get the four-star under our belt and be learning a little bit more about each other and just solidifying our partnership.”

After those two stellar rides today, Tamie Smith sits in both second and third place. Solaguayre California, an 11-year-old Argentine Sport Horse owned by Julianne Guariglia moved into second with a score of 30.7 after a double clear round. Tamie said that “California” has been somewhat green as she moved up the levels, “but knows her job now. So I was absolutely thrilled.” 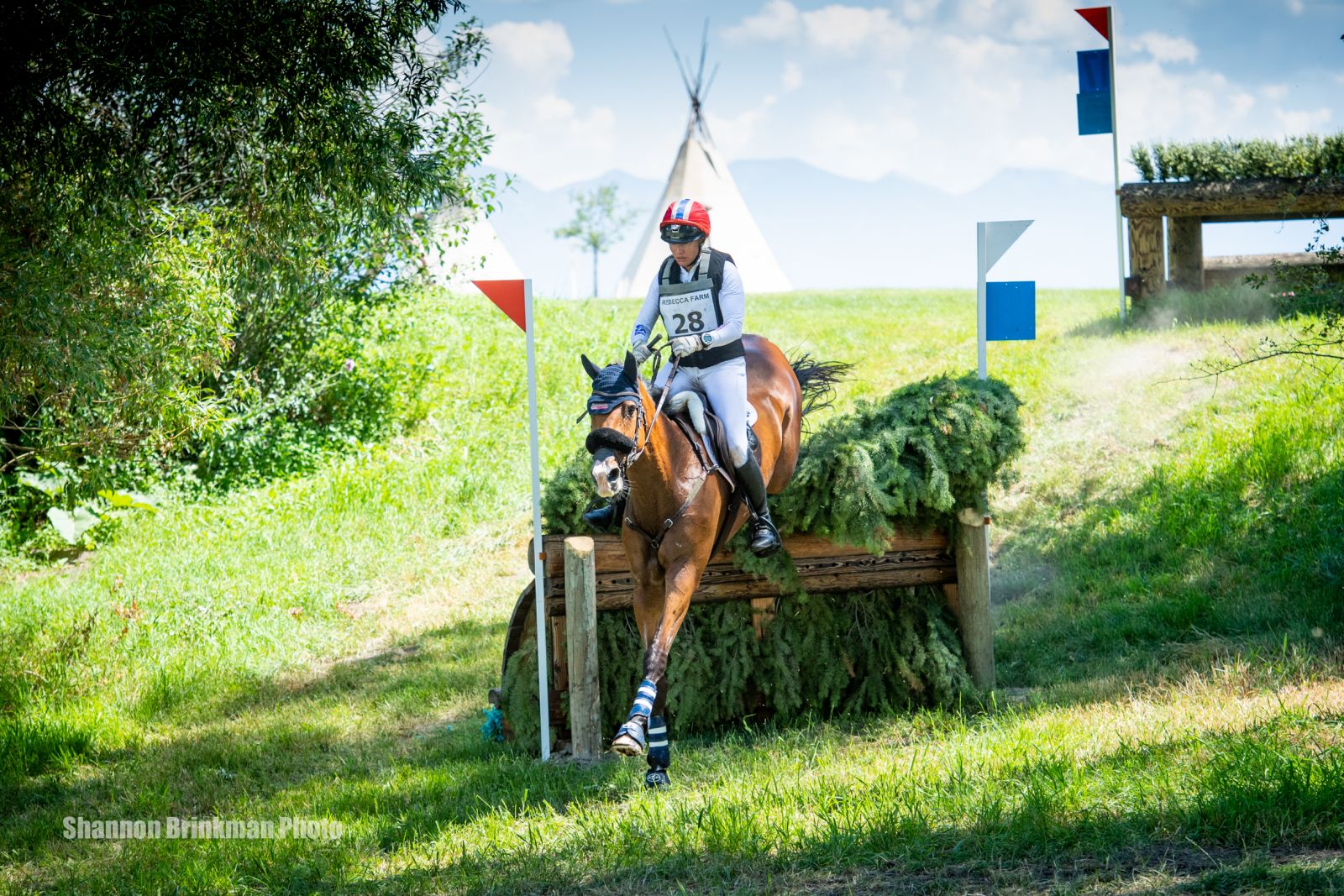 Ruth Bley’s Danito, a 13-year-old Hanoverian had zero jump and 5.6 time penalties. Danito and Tamie sit in third on a score of 33.8. Danito injured his withers in a freak accident in the cross ties this past winter, so Tamie was initially hesitant about entering him in the 4*, but had confidence in him as seasoned horse. “I’m glad to have my little friend back,” Tamie said. “He’s such a cool horse.”

CCI3*-S: A Change-Up and a Rising Star

Ian Stark’s course presented challenges that resulted in a total change-up of the top standings: Taylor McFall stands in first place with a score of 42.2 aboard Stoneman, an 11-year-old Thoroughbred owned by Cheron Laboissonniere. Taylor praised her horse saying, “We totally killed it in the downhill combos, something that really was scaring me, just because I hadn’t done that big of a drop before.” Taylor joked that she stole the ride on Stoneman from her mom, Jennifer McFall.

Mikayla Hoffman and her own 15-year-old Thoroughbred Eli currently stand in second on a score of 43.2. Mikayla particularly enjoyed the water complexes on the course, saying “definitely the first water was a highlight for me… he just went through and nailed that one stride out.” Eli has come a long way from his time on the racetrack. When Mikayla and her mom first got Eli, he was malnourished, but they worked diligently to get him healthy – now he’s a contender for the Young Riders three-star team this year! 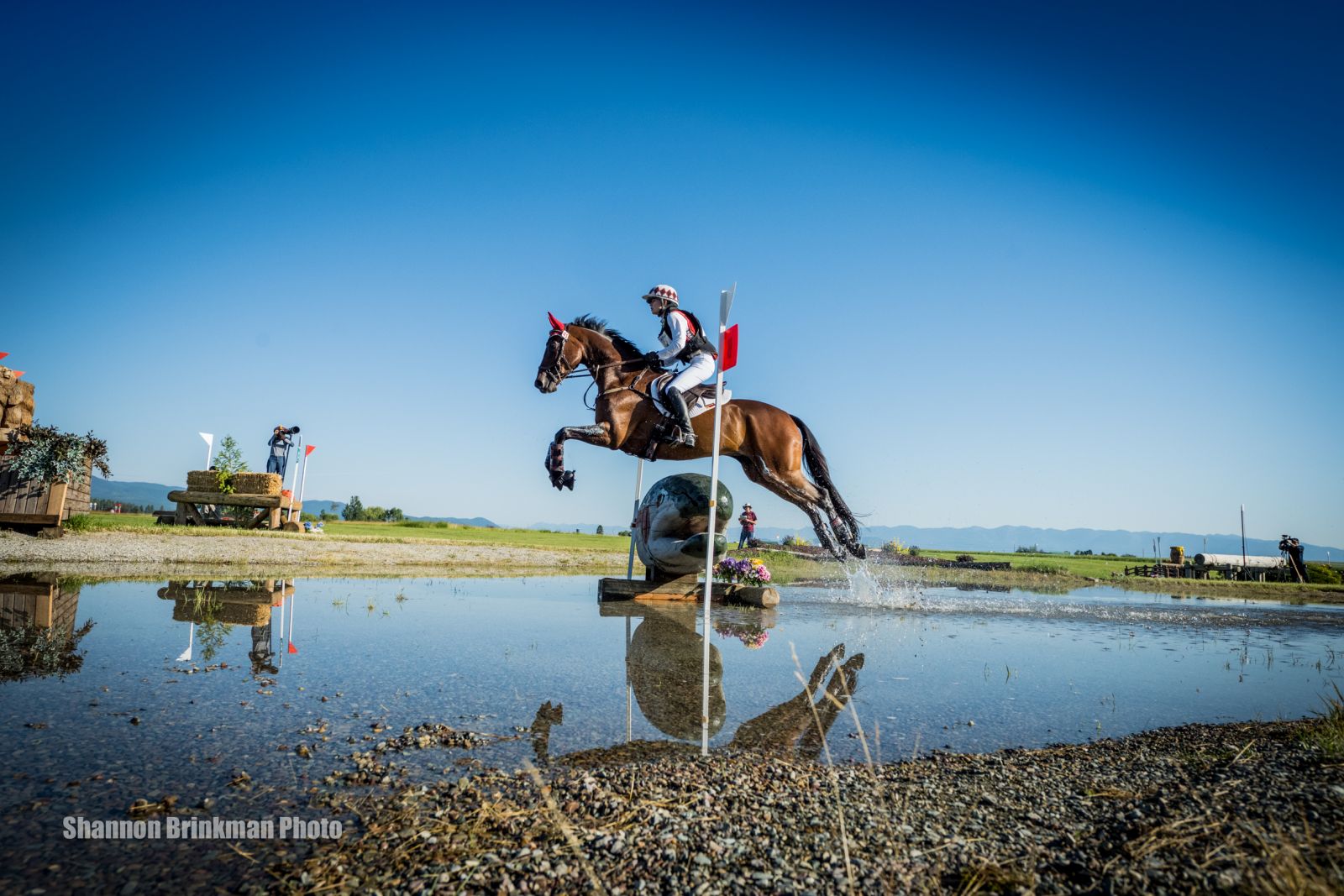 Borasco, a 13-year-old Oldenburg, owned and ridden by Kerry Groot, is standing in third place on a score of 43.9. Kerry is one of several Canadian riders at Rebecca Farm this year, as is Mikayla Hoffman.

Liz Halliday-Sharp and Cooley Nutcracker had zero jump and zero time penalties, to hold their lead in the CCI3*-L with a score of 29.4. The 8-year-old Irish Sport Horse is owned by Deborah Halliday, Renee Lane, Ocala Horse Properties, and the rider. Cooley Nutcracker is a relative newcomer to Liz’s string, having formerly been piloted through this level by French rider Asiter Nicolas. Last year, the gelding contesting the FEI World Young Horse Breeding Championships, finishing in the top-20 in the seven-year-old division.

Liz said she had a fantastic ride and was complimentary of Ian Stark’s course. “It was a good track. I really thought the coffin was a super question. The back end and just the whole track was well designed. I thought it was a real good test for the three star long.” 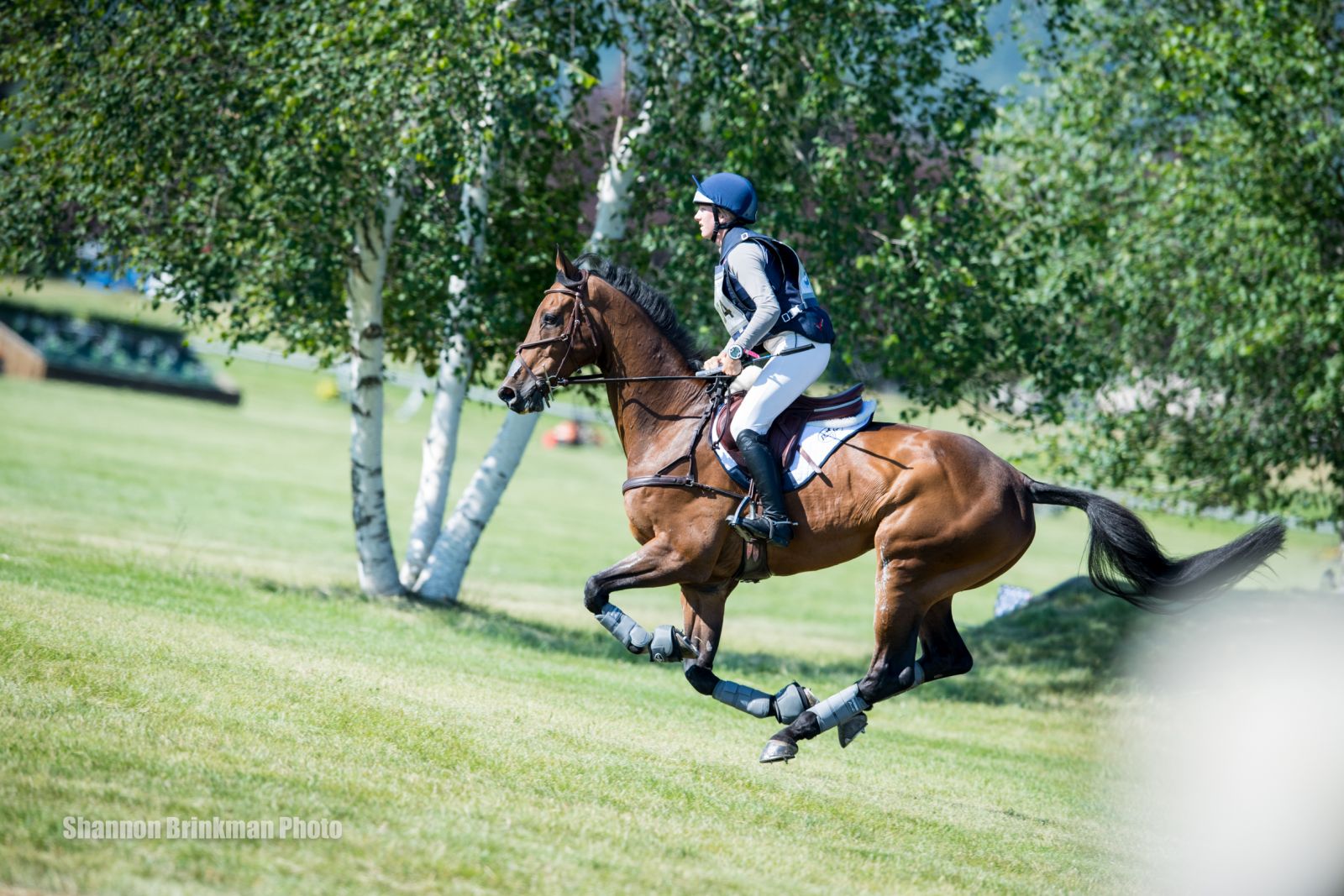 Meg Pelligrini and her 17-year-old Holsteiner, RF Eloquence, also had a double clear round to move up a placing into second on a score of 31.9. “I was a little bit nervous going out of the box… but I got to see a couple of people go before me and everyone made it look easy. So he’s amazing, it was beautiful,” said Meg.

Brittany Crandall and her 9-year-old Dutch Warmblood, Cooley Almighty made an impressive jump from ninth into third as they held their dressage score of 39.5. Brittany and “Kavan” are recipients of the Ocala Horse Properties Rebecca Farm Flight Grant. 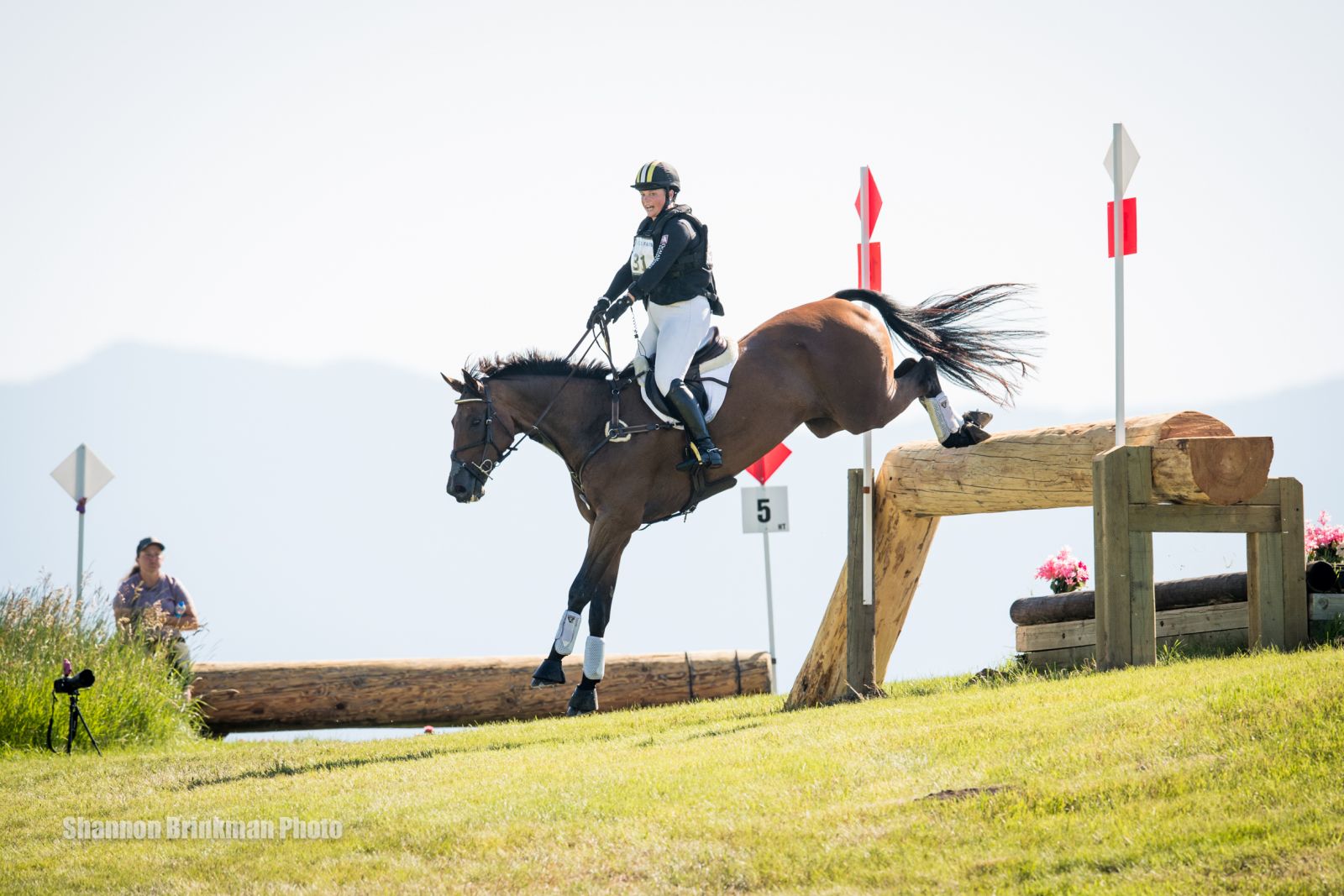 Brittany describes Cooley Almighty as “…a cross country horse. He lives and breathes for it, and he’s got a huge gallop. And he’s super, super brave. He took on everything.” Brittany wouldn’t have been able to compete at Rebecca Farm this year without the flight grant from Ocala Horse Properties. She competes at the FEI level as an amateur and maintains a full-time job, which I have to say is incredibly impressive!

Taren Hoffos and Carolyn Hoffos’ 11-year-old Oldenburg mare, Regalla — “The Queen”, as the Hoffos family likes to call her — jumped a double clear in the CCI2*-L to move from third into first on their dressage score of 30.5. “She was amazing. She was incredible,” Taren said. “She’s so fast — she doesn’t pull at all. She’s always in a good balance. So I can be so quick and efficient.”

Taren’s husband, Ken, is here with her in Montana and he opted for the hard-hitting question in this afternoon’s press conference: waffles or pancakes? Taren prefers waffles, so we hope she fuels up on Sunday morning before her show jumping round!

Cristina Rennie moved into second place after a double clear ride with her own Flight of the Arabesque, strong positioning at just their second 2*-L event. At 18 hands, Flight of the Arabesque is hard to miss out there and had no trouble making the time on Ian’s track. “He was really good,” Christina said. “I couldn’t ask for anything else.”

The FEI horses will trot up for the ground jury tomorrow at 7 a.m. MST, and FEI showjumping begins at 9:00 a.m MST. The jog as well as all FEI show jumping will air live on RideOnVideo.net.

We’ll be back with much more tomorrow, and keep an eye on this post as we’ll be updating it with more photos!