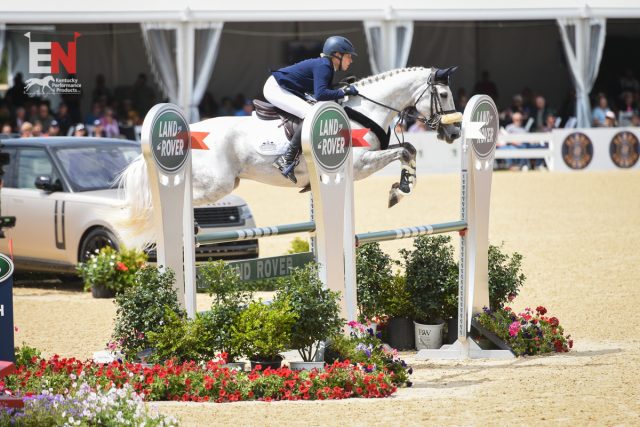 Watch out world: Liz Halliday-Sharp and Cooley Quicksilver are coming for you. The pair steadily crept up the leaderboard one place at a time over the weekend after having sat third after the dressage and second after cross country. Today in the final phase they jumped a stylish double clear round to clinch the win in the Lexington CCI4*-S with a final score of 29.7.

Liz also finished her younger mount, nine-year-old Irish Sport Horse, Cooley Be Cool, in the top 10 as well finishing sevent on a score of 46.5 after jumping clear with a single time fault today.

“Both of my horses just jumped phenomenally today, which I couldn’t have really asked for more,” Liz said. “They both really rose to the atmosphere which is fun and and it’s so great to have so many people here … which is what we’ve all be waiting for after COVID. It’s wonderful to have the crowds back.” 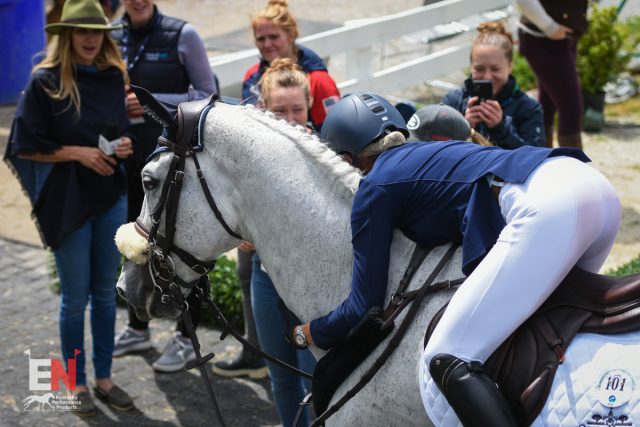 Liz Halliday celebrates her 4* will with Cooley Quicksilver. Photo by Shelby Allen.

“I feel like he really deserves this, he gave me everything this weekend and jumped one of the best rounds he’s ever jumped today.”

The “weird and wonderful” 11-year-old Irish Sport Horse gelding, who goes by the name “Monster” in the barn, for which his ownership syndicate is named, has been with Liz since he was a “really, really green” five-year-old and made his five-star debut at this venue a year ago before flying to France to contest Pau CCI5* last fall. It was therefore a bit surprising to find him on the four-star entry list at Kentucky this year, but Liz confirms that it’s all part of a bigger plan as they head to contest Luhmühlen in June over a track which they believe will be well-suited to the horse.

“This is a great place to get him in a big atmosphere before going off to another five-star. He was certainly a little green at Pau, so it’s great to get him in this big stadium in front of a crowd again.” 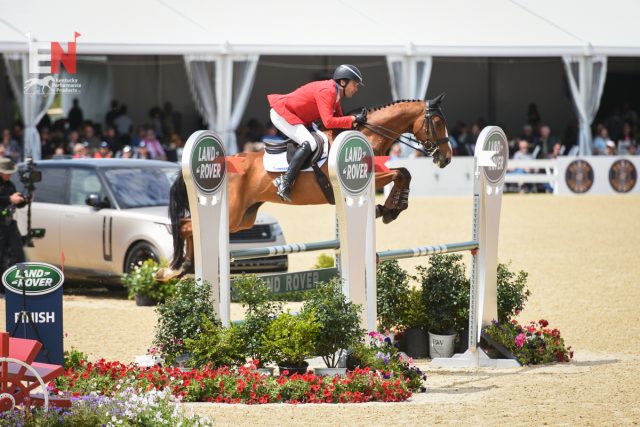 A familiar name earned second place at the end of the weekend, as Phillip Dutton and up-and-comer Quasi Cool, an 11-year-old Holsteiner gelding (Quo Vados x B-Estelle, by Lord) owned by Caroline Moran, will take come the red ribbon after jumping clear today and adding 1.2 time penalties. Overall, they moved up from 15th position after dressage to finish with a score of 38.6.

Even with a storied career in this sport, Phillip says that it’s always exciting to have a horse like “Quasi” stepping into the spotlight, especially with incredible venues and events to take him to.

“A lot of our sport is all about the dream,” Phillip said. “A lot of the time there’s so much disappointment but you’re always dreaming what could happen and [Quasi Cool] looks to have all the makings of a really good horse. I think this weekend was a great education for this horse.

“I’m so glad that the Kentucky event put this on for us. To have a strong cross country course like that and then to show jump in an atmosphere like this big arena it’s invaluable” 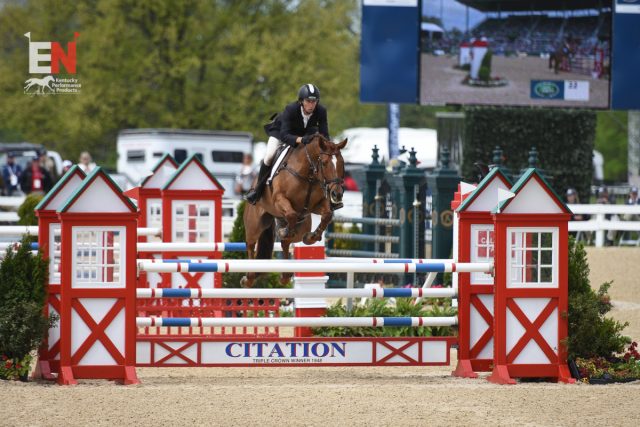 James Alliston admits that his entry of Nemesis, an eight-year-old Canadian Warmblood gelding (Novalis x Maesy, by Musing xx) owned by himself and his wife, Helen, into the four-star here was a bit of a gamble, but it’s one that paid off hugely. The pair rose from 26th place after dressage to end their weekend with a surprise third place podium finish on a score of 43.4. They jumped clear with 9.2 time penalties over yesterday’s cross country track and again and jumped another clear round again today just one second over time.

James and Helen made the long drive from California to Kentucky with trailer in tow and James said that they mainly brought Nemesis along as company for their other horses that would be competing.

Helen also rode in this division, finishing in the top 25 with Ebay, and Jame contested the five-star with Paper Jam though they unfortunately had to withdraw after the dressage.

“I’m thrilled with him,” James smiled. “He’s a bit green to come and do this I think — he’s only done two Advanced before it and everyone said this is quite a hard four-star … he’s very brave naturally so I was hoping I wasn’t being stupid and it wouldn’t faze him so I was really really happy with the weekend.”

We caught up with James and Helen earlier this week to hear about their spring, which was truncated by an EHV-1 outbreak in California that cancelled the majority of spring preps: 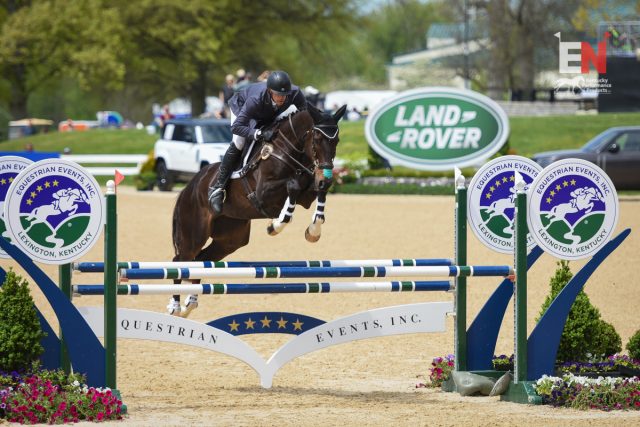 It wouldn’t be the winning weekend that perhaps a lot of fans had hoped for for the Indiana amateur rider, Dan Kreitl and Kay Dixon’s Carmango (Chirivell x Taramanga, by Templer xx), who led the way in this division following the only double clear cross country of the day yesterday. With no rails in hand ahead of Liz and Cooley Quicksilver, “Fritz” took a peek at the Twin Spires fence and balked as they made the turn to approach the diagonal line that included the triple combination in Rolex Stadium, costing them penalizes for a runout and for time.

The pair lowered an additional two rails as well, but Fritz, who is just nine this year, wouldn’t be the world’s strongest show jumper — he had a similar experience at Tryon in the 3*-L in 2021, lowering two rails to drop out of the lead. However, this weekend wasn’t about the win for Dan.

For Dan, a fourth place finish in just his third 4*-S, is the icing on the cake — it’s the highest placing he’s achieved in his brief tenure at the level to date, and we’ve got a sneaking suspicion this won’t be the best we’ve seen of this pair who certainly earned themselves a whole lot of new fans this weekend.

“This is a dream come true for him,” Dan’s coach, Sharon White told us. Dan has a unique system in which he’ll often send his horses to Sharon to keep them tuned up when his personal life gets hectic. It’s difficult, he told us yesterday, to have to come back and pick right up ahead of a competition. But thanks to the well-run system Sharon’s instilled in her program it’s as simple as it can be to step back in to the stirrups after some tune-ups. 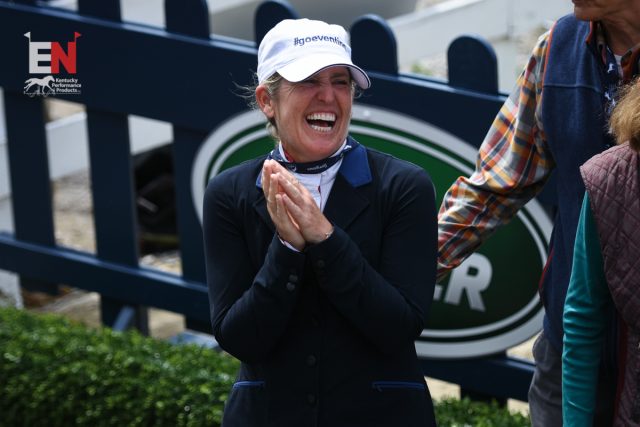 “It’s easy for Dan, and anything we can do to make his life easier we will do,” Sharon said. “I think the way I ride the horse is very complementary to the way he rides and I do try to keep things uncomplicated.”

“I think he enjoyed his time in the show jumping more than anyone I’ve ever seen,” Sharon said. “He’s worked hard to be here and deserves every moment of it. His partnership with his horses is just fantastic.” That partnership was demonstrated in the show jumping after “Fritz” Dan kept his cool, calming presenting the horse to the fence and making it work the rest of the way down the line.

At the press conference, the top three riders concurred that they all would have enjoyed seeing Dan have a podium finish as well.

“I want to just mention one part of the sport that’s not fun,” said Phillip, with Liz and James nodding in agreement. “I think we all would have liked Dan being up here and being a part of this and we’re also glad that Liz has done well, but I just wanted to mention that because he seems like such a great guy and I think we’ll see a lot of him and his horses in the future and I certainly hope so.” 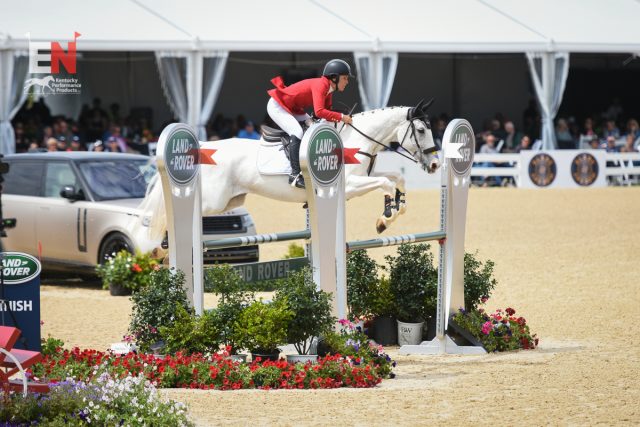 Dana Cooke enjoyed a successful weekend with the talented FE Mississippi (Cassini II x Liastra, by Legaat), a 12-year-old Württemberger mare owned by the FE Mississippi Syndicate, finishing in the top five with one rail added for a final score of 44.5.

This partnership has traveled to Lima for the 2019 Pan American Games, representing Canada, and they most recently won the 4*-S at Chatt Hills on their way to this event. Dana’s been busy preparing to head overseas to compete in Ireland, aiming for the 4*-L at Millstreet in June. The end goal for Dana is to represent Canada at the FEI World Championships for Eventing in Italy this fall, but “Missy” will remain in the UK and Dana will plan to compete in the 4*-L at Blenheim should she not get the call up for the Canadian team. 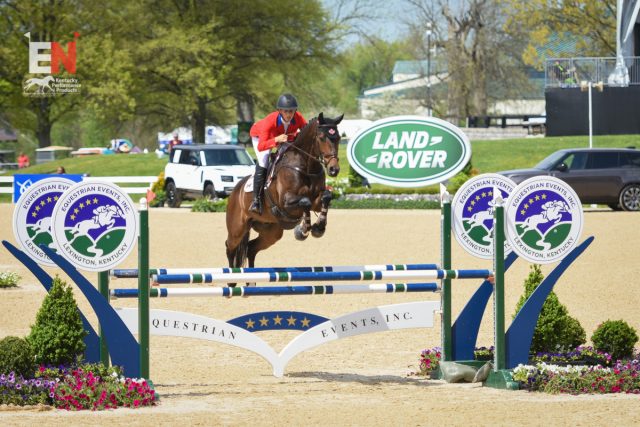 On the same score as Dana but just a hair farther away from the optimum time yesterday are fellow Canadian’s Colleen Loach and FE Golden Eye (Goldfever 3 x Cascade, by Contendro), one of two very exciting young talents on Colleen’s Advanced string, owned by Peter Barry, Amanda Bernhard, and Colleen. This horse also traveled to Lima for the 2019 Pan American Games and finished in the top five in the Morven Park 4*-L last fall.

That’s all from the Lexington CCI4*-S — an addition to this event that seems to be most appreciated by the fans and the competitors alike. Stay locked on EN, because we’ll be along with the conclusion of the five-star tonight! 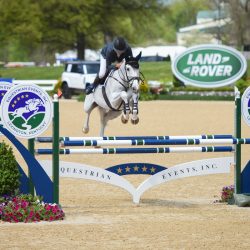 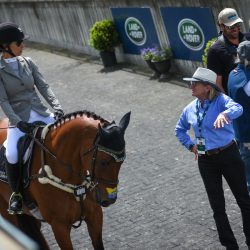 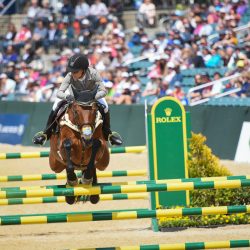 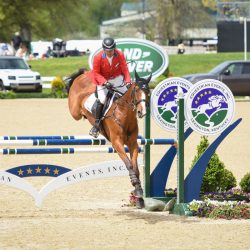 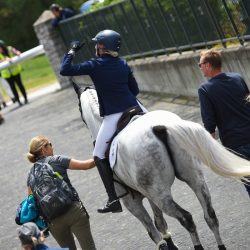 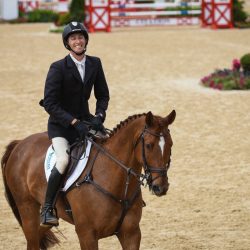 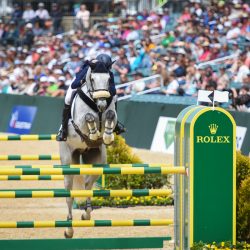 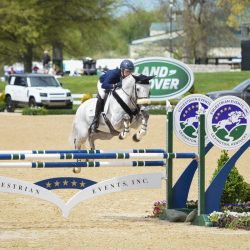 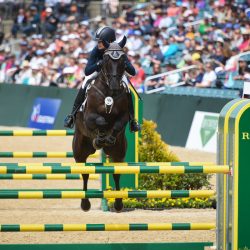 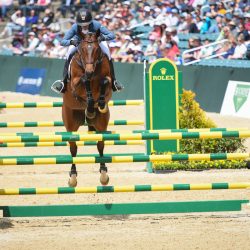 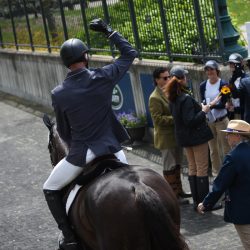