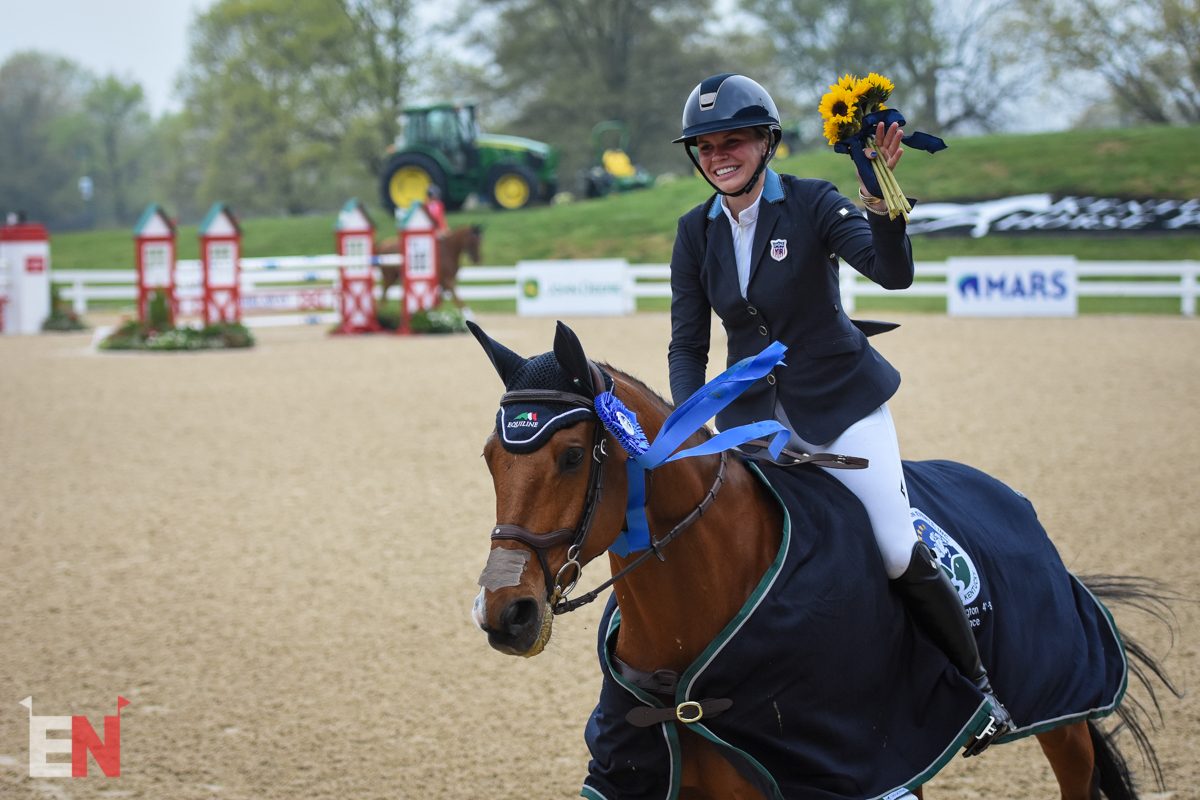 If there’s any weekend to win your first CCI4*, why not make it that of the biggest, baddest four-star the country has seen in recent memory? Luckily, Alyssa Phillips says she rides better when she has some pressure – and now she’s the winner of this year’s newly-added CCI4*-S at the Land Rover Kentucky Three-Day Event.

That cool under pressure mentality came in great handy as Alyssa and the 12-year-old Holsteiner Oskar (Coriando – Nicole, by Marlo) not only turned in the quickest cross country in exceptionally tough conditions yesterday but also laid down a rare double clear show jumping effort this morning on a day that saw just five pairs do the same around Steve Stephens’ track. They end their weekend in first place on a finishing score of 37.9.

“I think I’m dreaming, I should probably pinch myself and wake up from it!” Alyssa said as she sat in her first Kentucky press conference. “It’s pretty unreal. It’s my first four-star win and I just couldn’t be happier, I’m over the moon.” 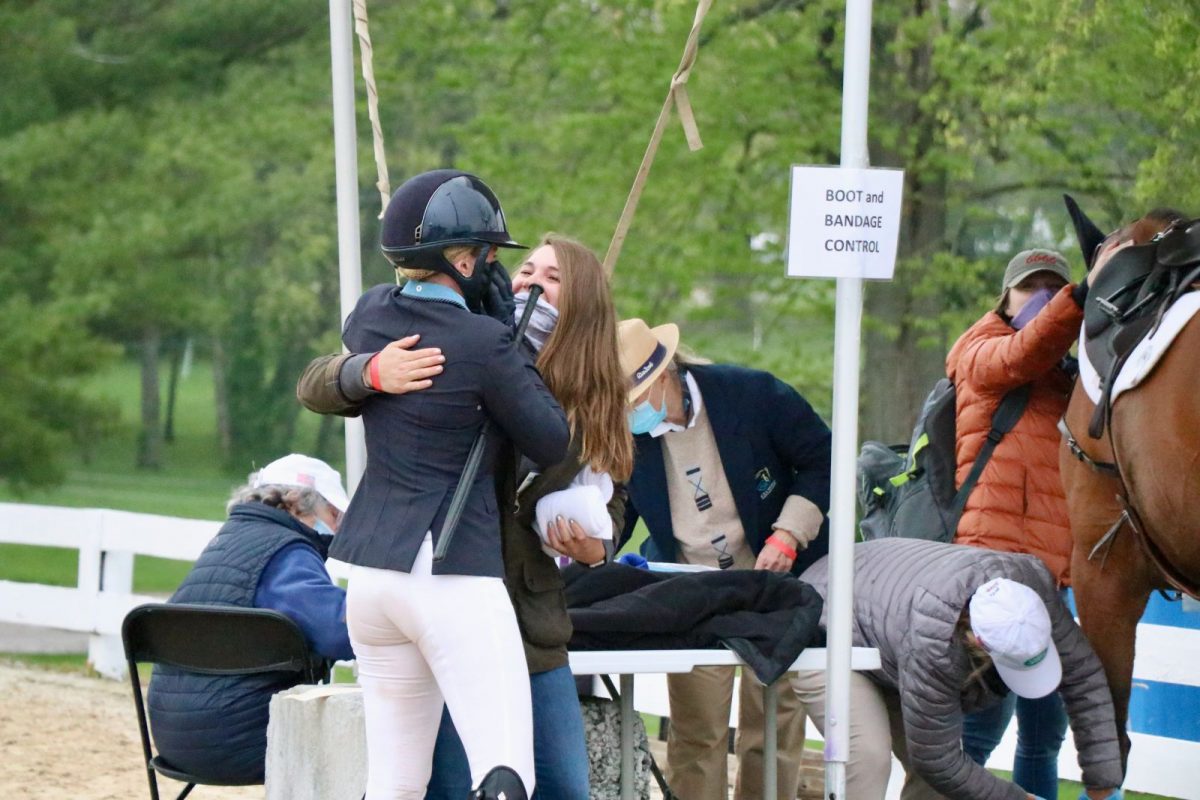 Alyssa’s 2021 season has been off to a rocking start. With her two younger horses, Cornelius Bo and FE Celestino, she’d already collected seven wins and is currently on a nine-win streak that extends back into 2020 with the 7-year-old Cornelius Bo (who was actually purchased from German rider Anna Siemer, who is competing in the CCI5* this weekend). So, it’s safe to say Alyssa’s soaking up the moment – and the pressure she rode under all weekend makes this win that much sweeter.

“I pulled up the live stream and started to watch (yesterday),” she said of her cross country trip, which was the fastest of the day with 5.6 time penalties added. She moved up from 15th after dressage into second following the second phase. “Nothing was riding according to plan, so I was a bit nervous but I actually ride a bit better under pressure. I went to the warm-up and (coach Jennie Brannigan) told me ‘you know your horse, just ride to plan and be aggressive’.” 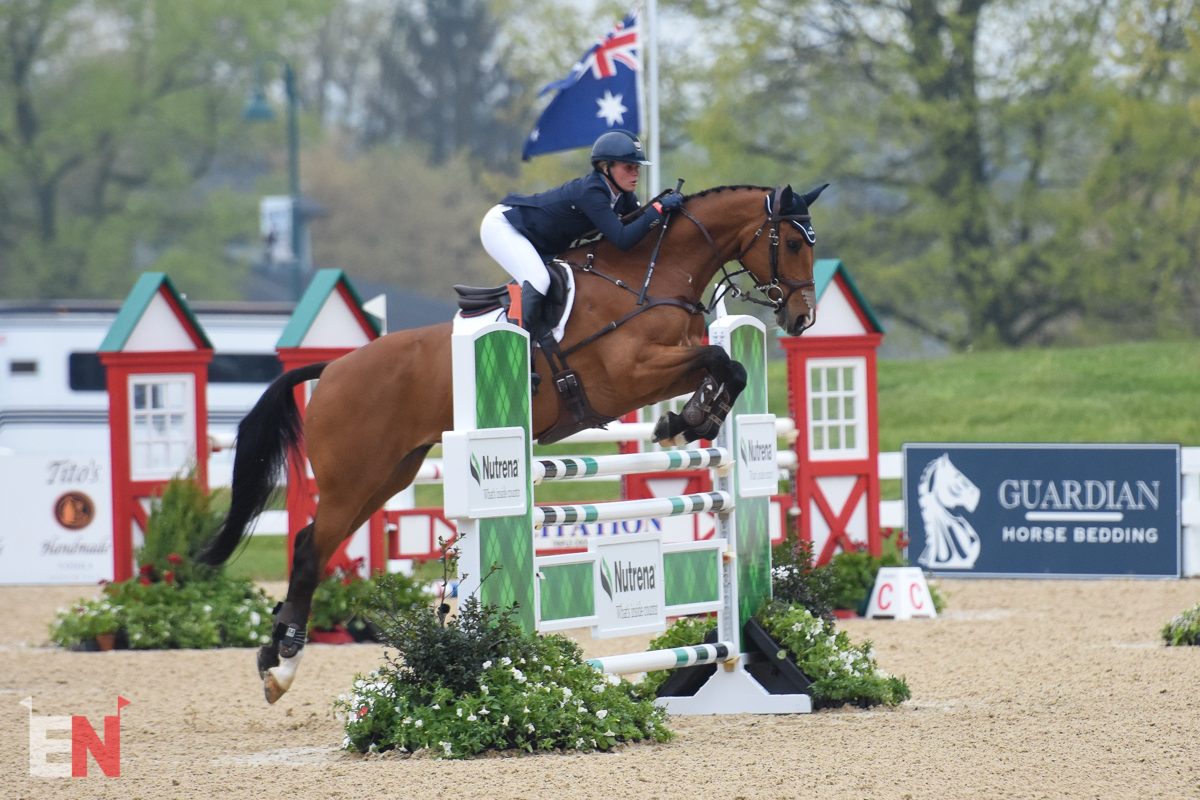 With the rain pelting in her eyes, Alyssa didn’t even check her watch while on course, knowing that the most important job was just to get home safely. Luckily, Oskar, she says, doesn’t require a lot of setup in front of a fence, making him more efficient despite not necessarily being the quickest horse in the field. It was the toughest track she’s seen, she said, saying her nerves actually helped her ride a little better.

Alyssa and Oskar – who she describes as “pretty much like a dog” around the barn – don’t have much time to celebrate this weekend, as they’re next heading to their first CCI4*-L at Jersey Fresh in early May. 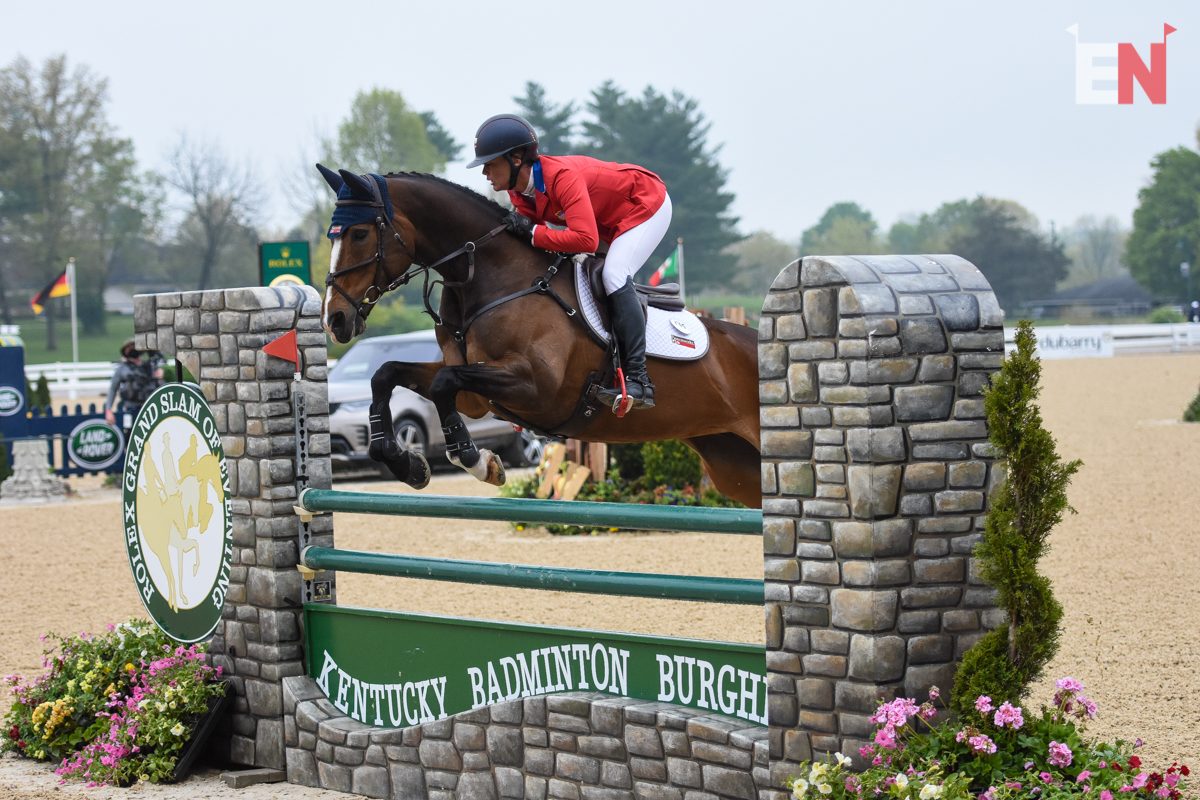 Tamie Smith, the overnight leader with Ruth Bley’s EnVogue, just barely ticked a rail at fence 9A, the first of the treble, lowering her final placing to second on a final score of 40.2. Ever the practical professional, though, Tamie was quick to congratulate Alyssa, whom she has known for several years, and says for her, the competition is with herself. This event now sets Tamie and “EV” up for the Jersey Fresh CCI4*-L, the duo’s final destination before heading back to California after spending the spring out East.

EnVogue (Earl – Laurena, by Lauries Crusador), who is in her second full season at the Advanced level, has continued to grow into herself and Tamie says she’s thrilled with the 16-year-old mare’s progression.

“She hasn’t done much in her career,” she explained. “Ruth Bley started her as a young horse and she did a lot of Prelims with a girl who worked with Ruth and couple of Intermediates before coming to me. So shes only been up at Advanced for two years or year and a half and she’s a very – knock on wood – sound and strong horse. So I think she’ll do the long at Jersey and look at heading to Maryland 5 Star in the fall. With these horses, honestly age is kind of just a number if they’re feeling great and sound and good in their bodies. And every event she just keeps getting better and better so we hope to do some exciting stuff with her.” 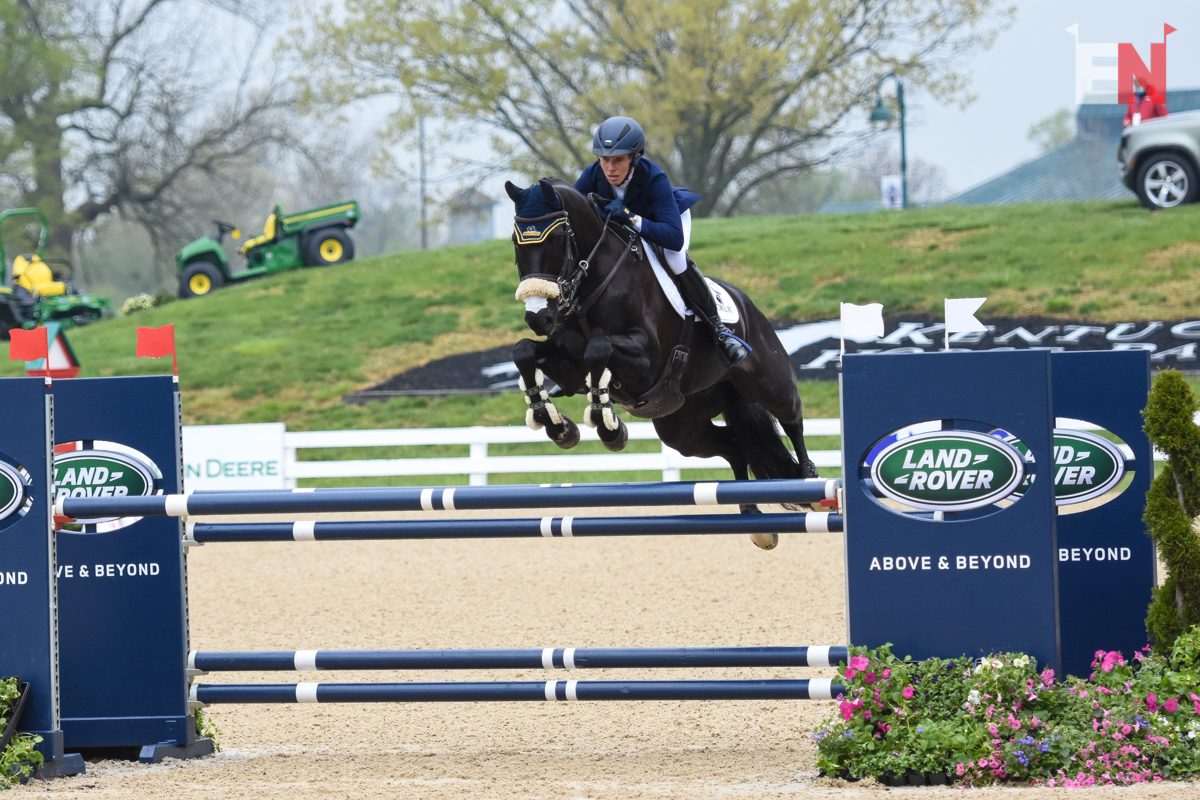 We’re thrilled to see Liz Halliday-Sharp and the carefully produced Cooley Moonshine, owned by The Monster Partnership, slot into third place overall, ending the weekend with a firm double clear jumping effort to finish on a score of 42.5.

Cooley Moonshine (Cobra – Kilpatrick Duchess, by Kings Master) has competed at the FEI WBFSH Eventing World Breeding Championships at Mondial du Lion twice, finishing third as a six-year-old and second as a seven-year-old – suffice it to say, this horse is one to watch as his career continues. Just nine this year, Liz said she’s taken her time producing him. “He’s pretty green still, but I think it’s such a great opportunity to get a horse like him into this atmosphere,” Liz said after the first day of competition this weekend. 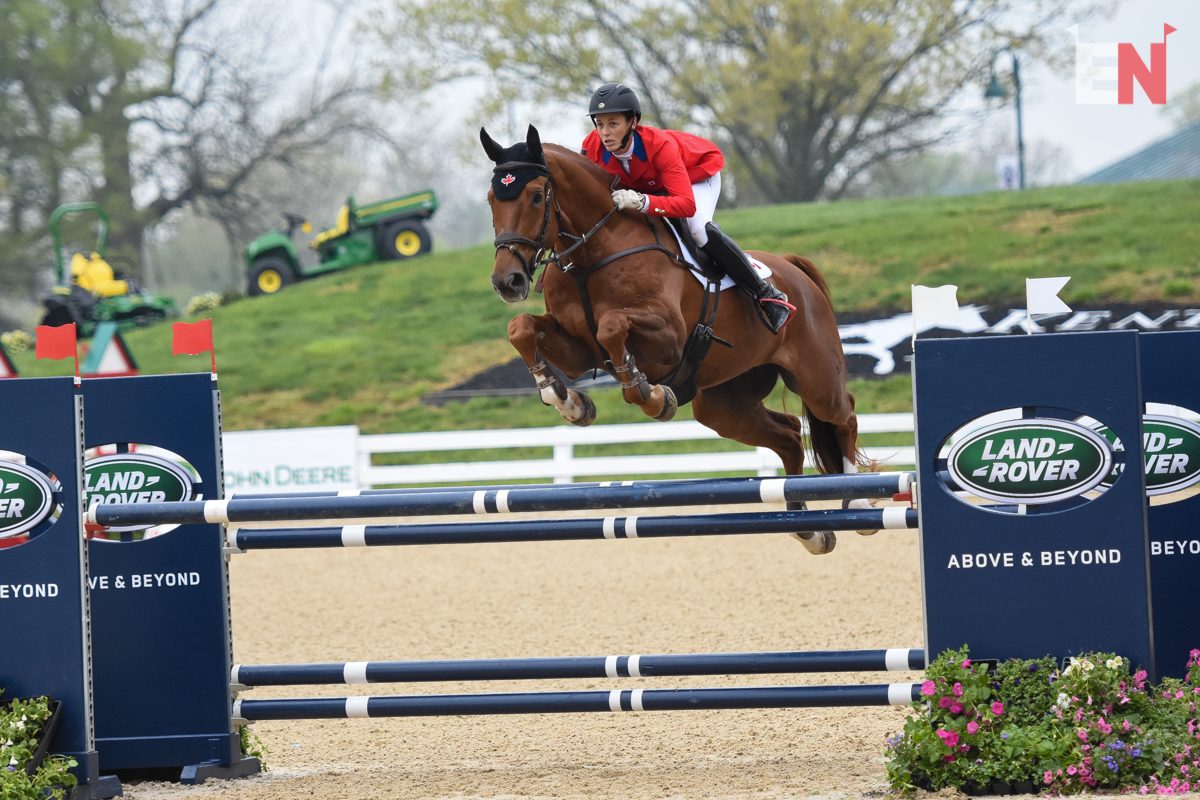 Rails clattered down around the course this morning with problems relatively scattered, though fences 1, 6 and 7 seemed to collect the most penalties. Clear rounds were difficult to come by – perhaps an after-effect of the tiring cross country tomorrow, the atmosphere in Rolex Stadium, or any combination of those and other factors. Other riders collecting clear rounds were: Colleen Loach – who enjoyed a stellar weekend with both Vermont (4th – 45.8) and FE Golden Eye (12th – 71.1), Ann Goodwin and Fedarman B (6th – 58.3), Alex Baugh and Mr Candyman (7th – 58.7),

We’ll now get ready for the nail biter of a conclusion in the CCI5* which will kick off at 1:30 p.m. EST with the first group and the top 20 at 3 p.m. EST. We can’t wait to see how this all shakes out! Thanks for following along with us. 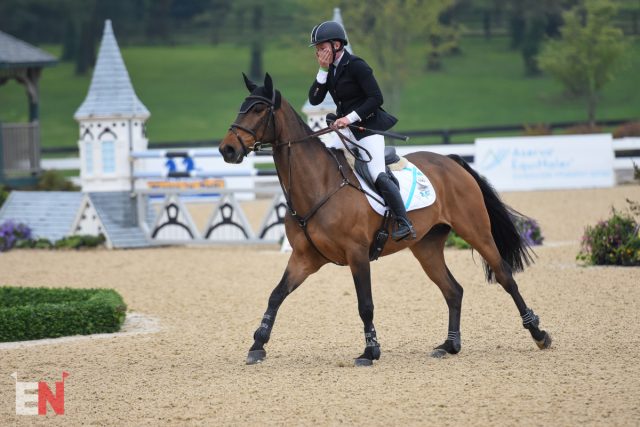 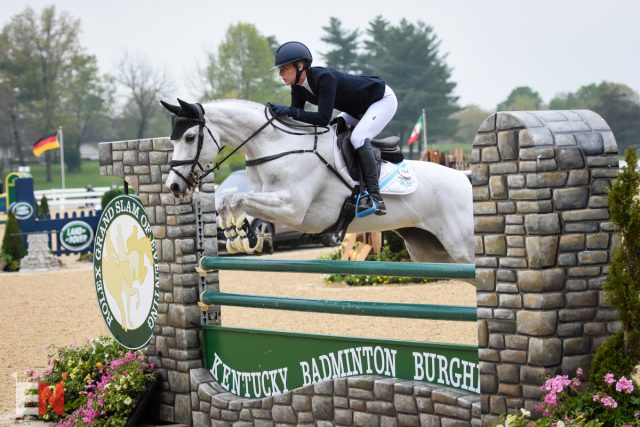 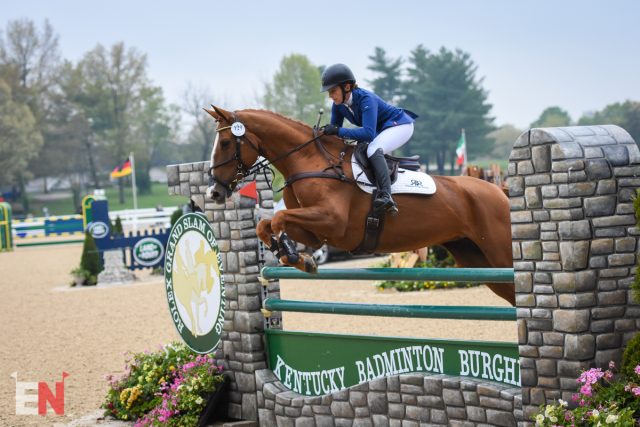 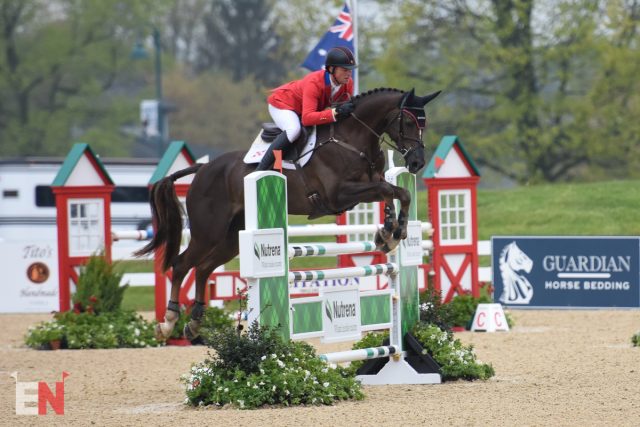 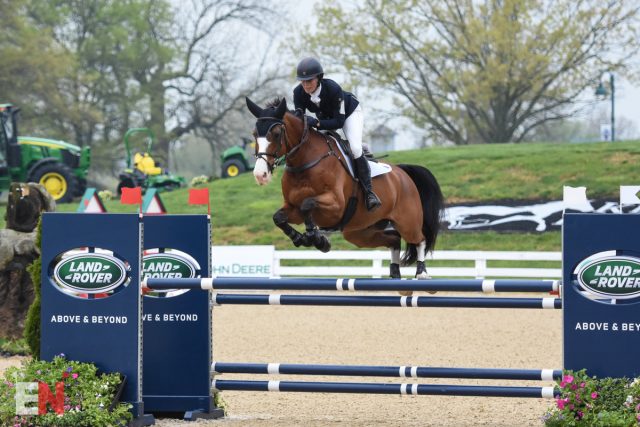 Ann Goodwin and Fedarman B. Photo by Shelby Allen. 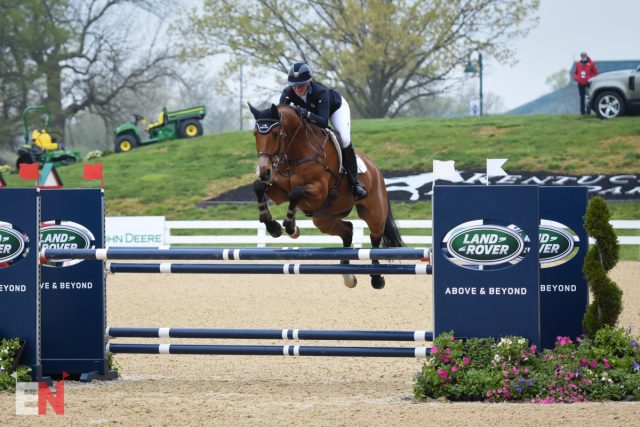