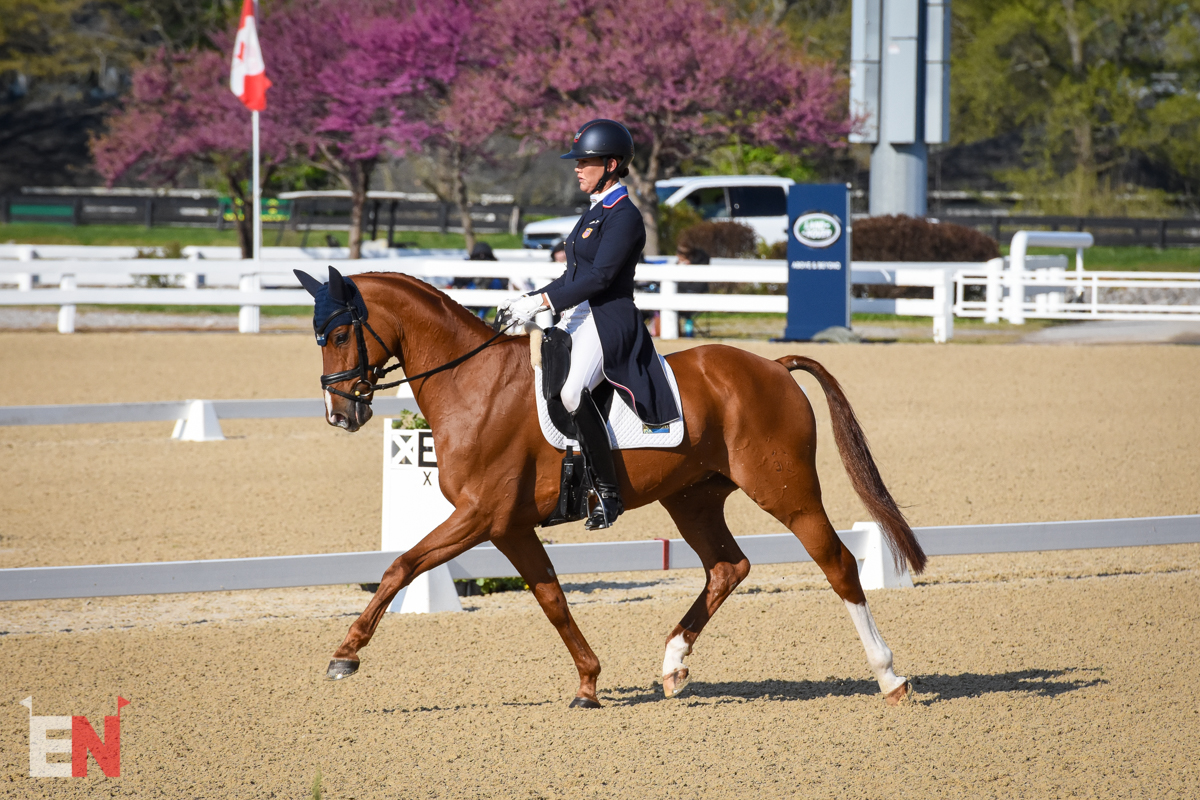 The CCI4*-S field is a stacked one and that fact was made evident by the competition we’ve seen right out of the gate. Many of these horses competing here are younger or newer to the level, making this the biggest atmosphere they’ve likely been in. To that end, we saw plenty of wide eyeballs – Will Faudree’s FRH Ramona was particularly adorable as she would break her concentration in her halts to glance up and give her surroundings a mindblown once-over – but some really nice moments that have led us into a three-way tie for first. It will be Liz Halliday-Sharp and Cooley Moonshine, Doug Payne and Starr Witness and Tamie Smith aboard Danito all scoring a 28.1 for early first place after the first day concludes.

Want to follow along with the forthcoming CCI5*? Don’t forget to download our Ultimate Form Guide to LRK3DE for just $5!

Things are typically quiet on Thursdays here even during a normal year with spectators, but it doesn’t make the vibe in Rolex Stadium any less eerie knowing there will be no filling of the grandstands with fans eager to see the heavy hitters this afternoon and tomorrow. The first few rows of seats are filled with cardboard cutouts, but even without as many humans, it’s still an atmospheric arena for any horse.

All that said, though, it’s a great experience for a young, inexperienced horse to come here and soak it all in – and perhaps it’s one silver lining of the absence of spectators. The four-star pairs performed CCI4* Test B, which is a stiff challenge in itself, particularly in the canter work.

Tamie Smith and Ruth Bley’s Danito (Dancier – Wie Musk, by Wolkenstein II) were among the earlier rides, and after some coaxing in the warm-up and through the first half of the test, the California-based rider was able to eke out some really lovely moments, including the last half of their canter work. Their score of 28.1 is a shade higher than what we’ve seen them pull in the past (Danito’s personal best at the CCI4* level is a 24.4). We’d likely be looking at a lower score without the additional tension – as Tamie said in the press conference, he’s more than capable of producing a better mark – but in all it was a solid performance that we’ve come to anticipate from this pair to set them in a good position ahead of Saturday’s cross country.

“Danito is actually a bit of a misfit,” Tamie said. “Before I got him, he was a little naughty and difficult and just couldn’t find his way with a different rider.”

Ruth Bley, an all-star amateur rider in her own right, initially intended to send the chestnut Hanoverian gelding to Tamie to sell, but after she took a few rides, Tamie knew she wanted to keep the ride. “I rode him a few times and I really liked him..so I called Ruth to ask if she was sure she wanted to sell him, and she said ‘I don’t know, let’s see what happens.’ Now, two years later, here we are.”

Indeed, Tamie calls Danito a match made in heaven (even confessing to me on a farm visit last summer that he just might be her favorite – shhh, don’t tell Mai Baum), and though he was “very quirky” today, she knows she just needs to keep ticking away with him.

Tamie is one of the busier riders this week, with three rides in the CCI4*-S and one in the CCI5*. She credits her team in the barn and the hour-by-hour schedule she sits down to write out each evening for keeping her on track this week. 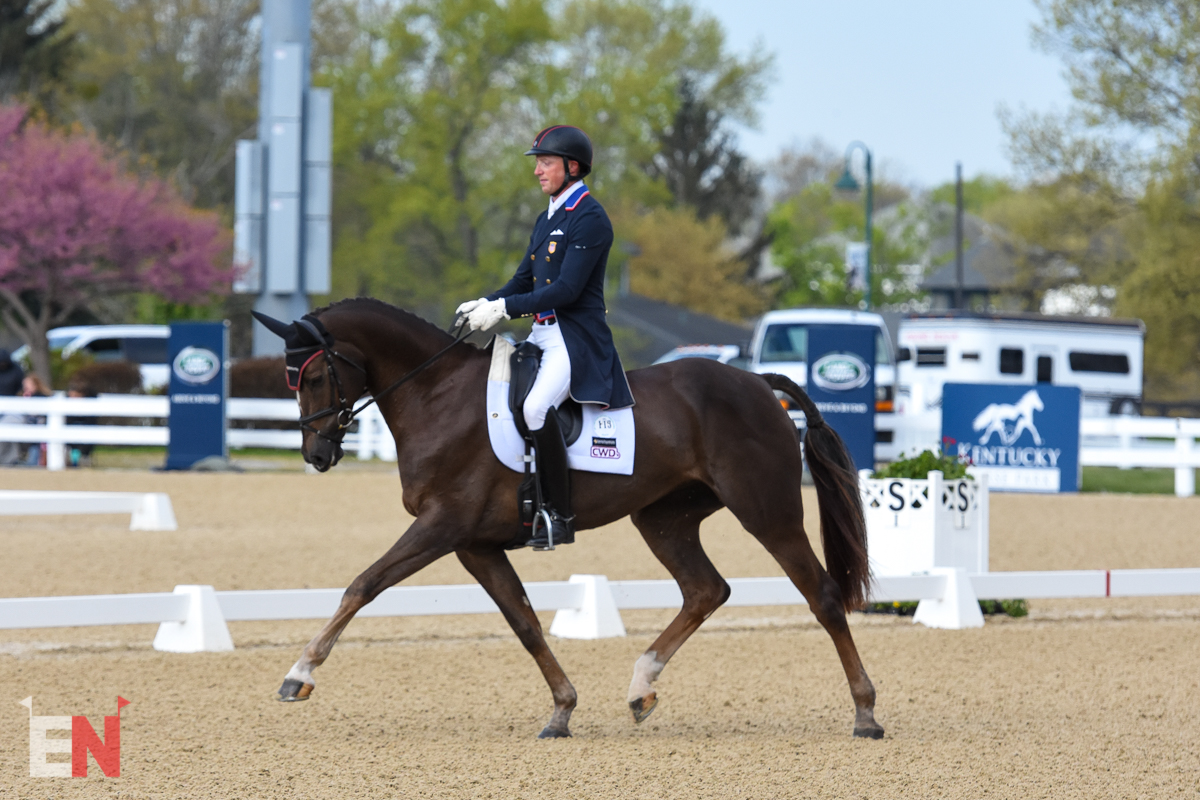 Doug Payne and his 2019 Pan American Games partner, Starr Witness (Chello III VDL – Carmen, by Veneur) were the next to earn a top score from the judging panel of Mark Weissbecker and Helen Brettell, putting in a smooth and expressive test to also earn a 28.1 on day one.

Owned by Laurie McRee, Catherine Winter and Doug Payne, the 10-year-old KWPN mare continued her trend of scoring above 70%, showing us the consistency she’s become known for as her eventing career has progressed. This is a mare who has quickly made her moves up the levels, having just begun eventing in 2018 after proving to be “too hot” for the hunter ring by former owner Emil Spadone. But thanks to her athletic prowess, she’s taken to her new craft like a fish in water, and Doug says it’s really just been about teaching her the unique nuances of eventing and instilling the confidence she’ll need to continue her upward trajectory.

“She’s wicked smart and quick on her feet,” Doug explained. “The Pan Ams were a big ask, and she stepped up to it and she’s continued to do that…her attitude is such that she wants to try her best, lucky for us she’s an athletic freak and she’s able to accomplish it.”

We’ll see Doug in the CCI5* competition this weekend with Vandiver and Quantum Leap. 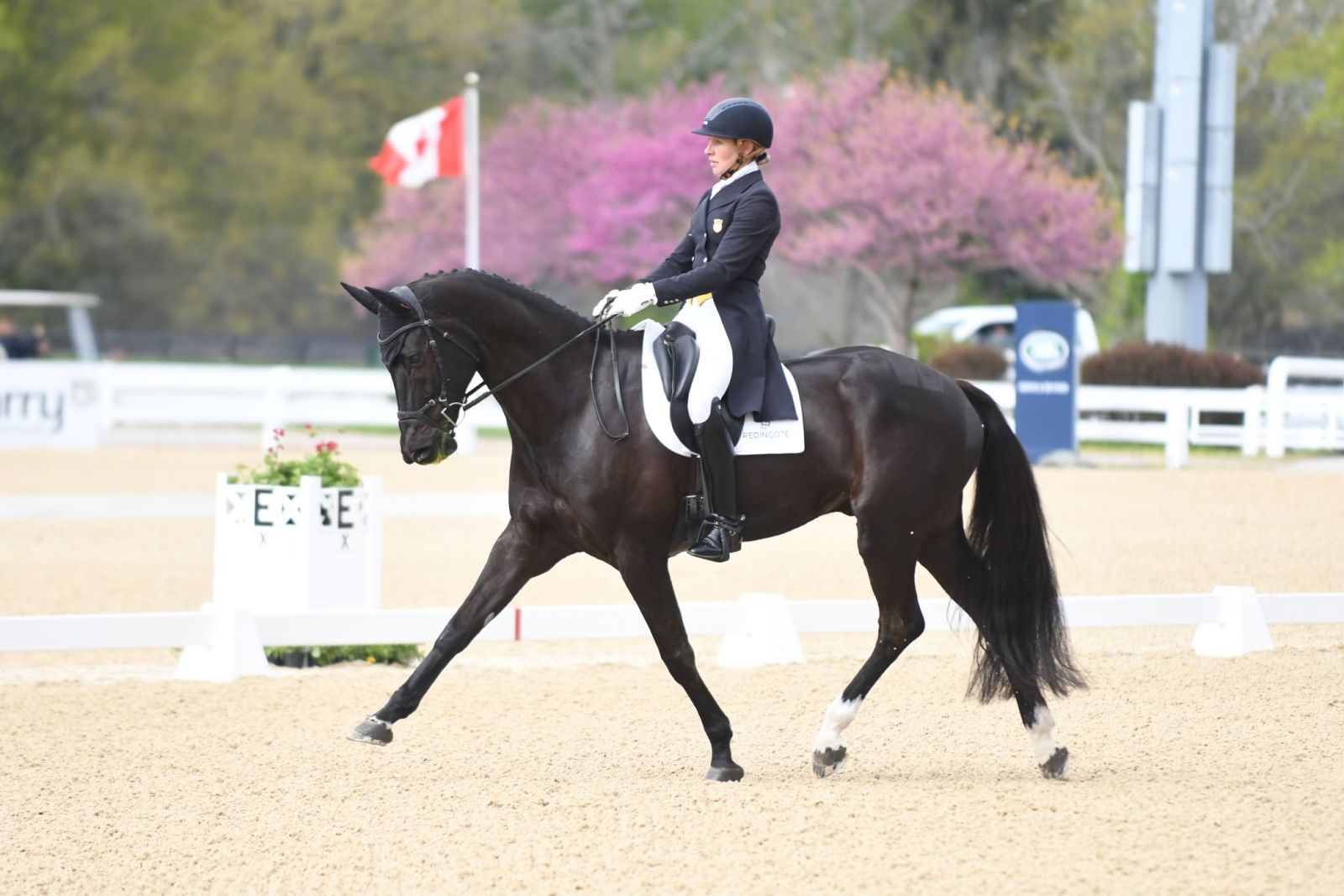 Liz Halliday-Sharp brings forward the 9-year-old Irish Sport Horse gelding, Cooley Moonshine (Cobra – Kilpatrick Duchess, by Kings Master), who is also green to the level having just done his first four-star last fall at Tryon. This is one she’s particularly excited about, and to that end she’s really trying to take her time producing him and wanted to take advantage of the opportunity to bring him to the biggest atmosphere in the U.S.

It’s not to say that Cooley Moonshine is lacking in competition experience though; he’s competed at Le Lion twice, finishing third and second in 2018 and 2019, respectively, as a six- and seven-year-old.

“He’s a really special horse,” Liz said. “I’ve had him since he was a five-year-old and he went to Le Lion twice, which was really great as a young horse. He’s pretty green still, but I think it’s such a great opportunity to get a horse like him into this atmosphere.”

Liz describes the striking gelding as quite bloody, a bit on the hot side, but he seemed able to put any tension to the side and work through it to also earn a 28.1 mark from the judges.

Above all, all three riders at the top of the CCI4*-S expressed deep gratitude for the fact that the event is running this weekend, thanks in very large part to the efforts of Sara Kozumplik Murphy, Dorothy Crowell, and thousands of private supporters.

“I’m super grateful for the people who got behind it when (EEI) said they weren’t going to run,” Tamie Smith reflected. “Everyone banded together and made a huge effort.”

So, how did the numbers break down? Maggie Deatrick checks in with her analysis:

“The 4*-S pairs who rode this morning had to contend with freezing temperatures and biting wind, and it showed in the scores, with 75% of the field scoring higher than expected, in many cases significantly higher. Four riders should be considerably pleased with their mounts: QC First Class, Landmark’s Monaco, Bogue Sound, and Cooley Moonshine all put in strong above average performances. The extra edge in particular should be exciting for Kimmy Cecere and Landmark’s Monte Carlo, who are strong in the jumping phases. This dressage score, nearly four points better than an average performance for them, potentially allows them to compete for the win this weekend.

The ground jury of Mark Weissbecker and Helen Brettell disagreed by at least 2 percentage points on nine of the twenty pairs to compete today; with three horses (Clip Clop, Bogue Sound, and FRH Ramona) seeing a gap of 4 to 5 percentage points and Trendy Fernhill being a gap of more than 7 points between the two scores. When looking at the overall scores, it can be inferred that Mark Wiessbecker is utilizing his judging scale more conservatively than Helen Brettell, as she has more significantly rewarded higher quality tests but also has given a harder look to those of lesser quality.”

We’re just about to kick off the CCI5* dressage, so be sure to download your copy of our Ultimate Form Guide to LRK3DE and tune in to both the live stream (linked below) and our live update thread.

Here’s a look at the rest of the top slots in the CCI4*-S, which will resume dressage tomorrow morning.