Kelsey Briggs is a North Carolina-based eventer who found her Intermediate horse, The Gentleman Pirate, at the racetrack. Kelsey is a hardworking person and a wonderful horsewoman, and it came as quite a blow when Pirate experienced what the vets called a career-ending neck injury in a pasture accident. The following is the story of Pirate’s amazing recovery. Thank you, Kelsey, for sharing your story! 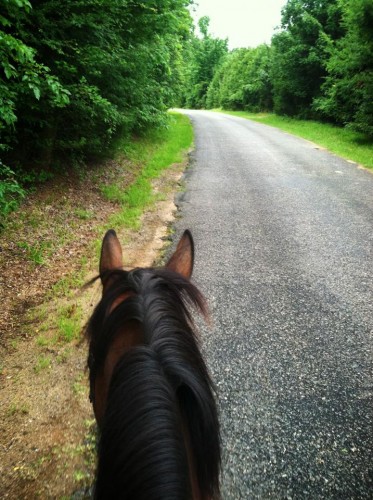 Pirate and Kelsey out for one of their first hacks after his injury.

This may seem like an ordinary picture of a horse hacking down a road, but when it’s a horse you thought you’d never sit on again, it means so much more. This is Pirate, a 10-year-old Thoroughbred gelding who I bought as a 3-year-old off the track. Pirate was the most wonderful horse to bring along, with the kind of work ethic every rider dreams to have in their horse. He showed much promise as a youngster, progressing through the levels quickly and successfully.

In 2011, after attacking a very difficult Intermediate at the American Eventing Championships, I aimed to move him up to Advanced the following spring. Instead, we met our first setback — a high suspensory strain on a hind leg — frustrating, but thankfully, not career-ending. We set about recuperating and preparing for a new campaign once the injury had healed.

In January of this year, tragedy struck when Pirate broke his neck in the pasture. We’ll never know how. This was the single most devastating experience of my life. The horse I had put everything into for years — on whom all my hopes and dreams for the future rested and who I will always consider to be the love of my life — was suddenly fighting for the only life he had known. I was able to get him onto a trailer to the vet, and an x-ray showed a significant crack in the body of one of his vertebrae, dangerously close to his spinal cord. Further displacement could mean death.

Our vet sent the images off to the state veterinary college, where the head surgeon asked if he had put the horse down yet. My vet laughed and said, “He’s standing in my clinic right now. You don’t know this horse. If any horse could recover from this, it’s this one.” Still, he had to break the news to me that Pirate could never be ridden again. The break was too significant, the side effects too permanent. The best we could hope for was to make him comfortable enough to be a pasture pet.

My heart didn’t just break; it shattered into a million pieces. A horse like Pirate can’t just live his life in a field; he lives for his job, needs to have a purpose. He’s the first to greet me in the pasture, the first to stick his head over the stall guard in the morning and flip his head up and down as if to say, “Pick me! Pick me!” When he’s on time off, he grabs at my clothes to get my attention if I walk by with another horse. If he’s wandering around the barn area (which he often does, like a big dog) and sees the trailer hooked up in the parking lot, he will load himself onto it, ready to go attack some giant cross-country course he’s certain is waiting for him somewhere. 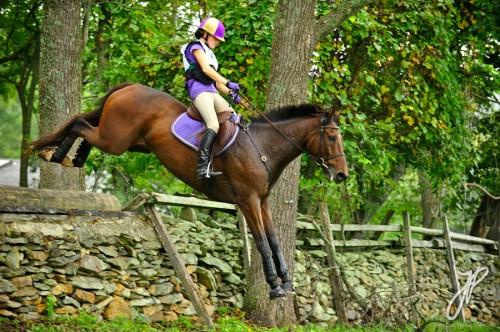 Kelsey and Pirate at the Middleburg Horse Trials in 2011. Photo courtesy of Jamey Price.

But I had to dry my tears and get it together, because I had organized a clinic with Francis Whittington, and he was set to fly into Charlotte two days after Pirate’s heartbreaking visit to the vet clinic. At first, I thought the timing couldn’t have been worse, but as it turned out, it couldn’t have been better. In the five days he was here, Francis was my shoulder to cry on, the mentor I desperately needed, and, as it turned out, quite possibly the reason I have this amazing story to share.

For one thing, he refused to let me lose hope. He was devastated for me, but while the rest of us accepted what we thought had to be true, Francis stepped in and told me that I had to try something, and I mustn’t lose hope. After a few days, it was time to put Francis back on a plane, and he had not only lifted my spirits but also been so kind as to leave me with his own personal ArcEquine unit, which I started to put on Pirate overnight. Rather than lose my mind, I just decided that Pirate was going to beat the odds.

Quite suddenly, something remarkable started to happen. Pirate met me one morning, ready to tear his stall down — the same bright Pirate I’ve always known. Seemingly overnight, much of his pain, inflammation and neurological symptoms almost vanished. Suddenly, he was marching around almost normally, even attempting to trot. Throughout the following months — and continuing to wear the ArcEquine daily — my brilliant horse amazed us in ways I think only he could do.

By March, vets, friends, family and students were astounded when they would watch him trot up, completely sound. In April, when he was put on supervised turnout in the big field, he began to take himself on trot sets around the pasture, quietly and methodically making the figure eight pattern we do for fitness when I’m on him. By May, he had gotten rather bored with our farm, and periodically “escaped” by opening his gate and walking down the gravel road, essentially taking himself on hacks and visits to friend’s farms. On occasion, he pushed this to the limit; I shot video of him galloping through his field bucking back in the spring. I suppose he heard Badminton was coming up, and he was feeling inspired.

And then, on July 2 — six months after breaking his neck — my prayers were answered. X-rays showed a beautifully healed vertebrae with no impingement on the spinal canal. It was truly miraculous. And on that day, I heard the words I had never expected to hear; I could get back on my Pirate. As soon as my vet left, friends and students gathered around for the emotional first ride, and I got a leg-up from a teary eyed student. In an instant, back on Pirate, my world suddenly felt right again. 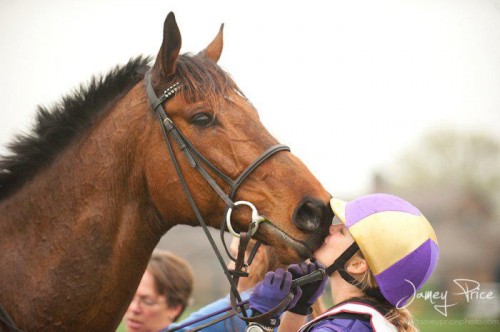 In August, I stood in my stirrups and allowed Pirate to canter, and just a few days ago, he popped over a little cross-rail, not feeling like a horse who had spent the better part of the year recovering from a broken neck, but like my upper-level event horse, ready to go jump around cross-country. I was alone at the barn, with no one to see me collapse on his neck and cry like a little girl. I don’t believe I’ve ever felt more emotion than in that moment, realizing what an incredible soul this horse has. That horse never stops trying, not even when every last odd is against him.

It’s not often that we are blessed with a horse like this in our lives. I don’t know how I got so lucky, but I’m not asking questions. There is no way I could have gotten through this without the tremendous amount of moral support offered up by my friends, family and even perfect strangers. I’m so thankful for our wonderful vets, who saw in this horse that “something great” that probably saved his life.

I will be forever grateful to Francis Whittington and Ian Thirkell for the ArcEquine. I truly believe that we couldn’t have done this without them. We have a long road ahead, but I couldn’t have a better team behind us. So here’s to cross-rails in September and big things in our future. And no matter what those big things may be, I’m just glad to have this horse along for the ride.

To follow along with Kelsey and Pirate on their road to recovery, check out Kelsey’s Facebook page.