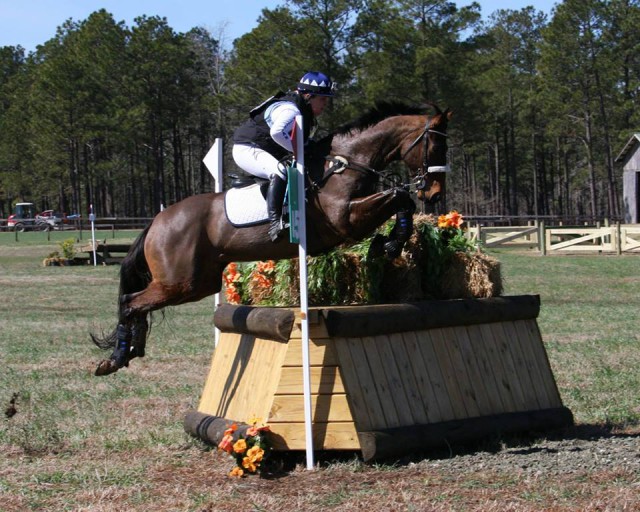 Their story begins in January 2013, when one of Carrie’s clients saw a 16.3-hand OTTB gelding listed for sale on Craigslist. Foaled in Texas in 1999 and given the Jockey Club name Willow Springs (Pick Up the Phone X Chris’s Avenger, by Staunch Avenger), the horse had raced 17 times, earning just under $5,000 in his career.  The ad said that he had previously been a jumper but that his owner could no longer afford to feed him. Carrie’s client said she “had a feeling about him,” Carrie said.

“I thought she was totally crazy but called the next day to schedule an appointment to go,” she said. “I drove two hours to go check out this horse, and as soon as I saw the poor starving thing I knew I could not leave without him! I purchased Will (as he’s now known around the barn) within 20 minutes of stepping on the property for $400. Will was on the verge of starving to death, literally, and lame on at least two of four legs. Although he barely had the strength to walk into the trailer, he seemed very happy to jump right in.” 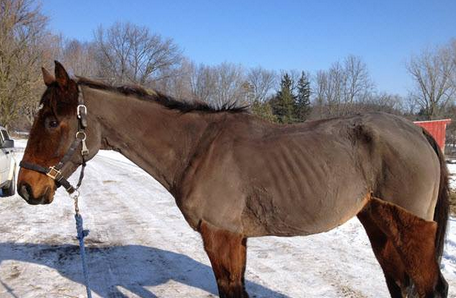 Afraid he wasn’t going to make it through the night, Carrie and her mother checked on Will every hour around the clock. Not only did he survive, he soon began to thrive in his new Michigan home. With groceries, regular vet and farrier care, and a slow start to a conditioning program, Will began to show signs of life. One day Carrie pointed him toward a small log in the pasture, and Will seized the opportunity to show his new owner what he was all about.

“The log was in a location where, if you jumped it straight, it was two strides out over a bigger, Training-size log. I very carefully presented Will at an angle to the small log with every intention to NOT come even close to the bigger log. Apparently, Will had a different idea, as he pulled the reins out of my hands, locked onto the out log, and over we went,” Carrie said.

Carrie signed him up for Novice at Spring Bay Horse Trials in April 2013 and, although he didn’t quite understand the dressage, he was brave and confident in both jumping phase. It wasn’t long before Will came around to the concept of flatwork; in July, he won the dressage at Cobblestone Horse Trials on a score of 30, adding one unlucky show jumping rail to finish 2nd in Open Training.

Will continued answering questions just as quickly as Carrie could ask them, wrapping up last season with a successful first Preliminary outing at the Hagyard H.T. at the Kentucky Horse Park. Carrie was careful to take their time cross country to give Will a chance to really understand each question, as the Prelim course shared several jumps with the CIC*. Despite one stop at the first water, Will rose to the challenge and proceeded to dominate every jump after that. They topped off the year at the annual Eventing Association of Michigan awards banquet, where Will — the starved horse who had never evented before that season — won both High Point OTTB and High Point Training Horse.

Carrie did her best to keep Will in training over the winter despite Michigan’s uncooperative weather, and the pair was out and about by March, contesting their second Prelim at Southern Pines. “I knew we would be pushing it getting Will fit enough that early in the year, but I figured if he felt tired, I would pull up or give him some trot breaks if needed,” Carrie said. She held him back in the cross country to be on the safe side fitness-wise, but they finished the weekend with two clear jumping trips.

After that it was off to Spring Bay H.T. in April at the Kentucky Horse Park, again posting a double clear on the cross country and finishing sixth overall in a big field. “This was the first time I allowed the Prelim speed, and he handled it with ease!” Carrie said. They then made short work of Penny Oaks H.T. in early May, where they finished second on their best Prelim dressage score to date (a 34.8) and two double clear jumping rounds. 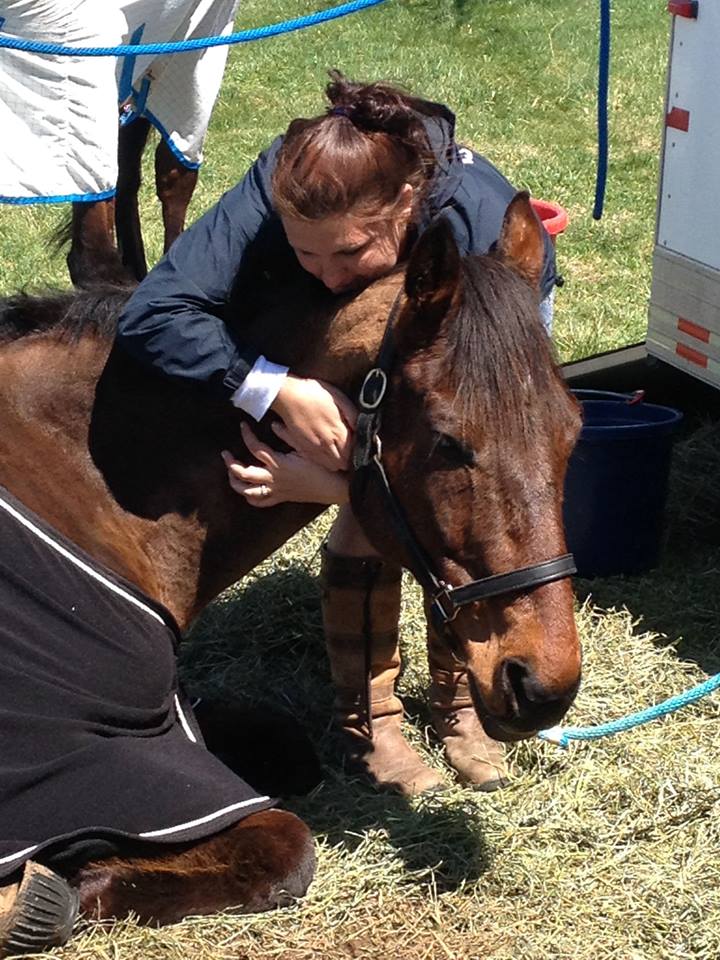 Next up is May-Daze H.T. this weekend, followed by an Intermediate move up at Lost Hounds H.T. in June and the CIC* at Stuart H.T. in July.

Carrie explains that while it feels like Will’s career path is on the fast track, she’s just letting her horse set the pace. “Our goals are to play it by ear, but I will move as fast as Will wants to go,” Carrie said. “He is the smartest horse I have ever ridden. If he has done something once, he knows exactly how to do it next time.”

Not quite a year-and-a-half after bringing Will home on the recommendation of a client who “had a feeling about him,” Carrie now has her own hunch. “I think Will is a very special horse, and I would not be surprised to see him at the upper levels within the next few years,” she says. “What started off as a rescue has turned into a horse that could possibly go all the way. I am very excited for this horse’s future, and my students seem to think this just might be my Rolex horse.”

Best of luck to Carrie and Will, and Go Eventing!