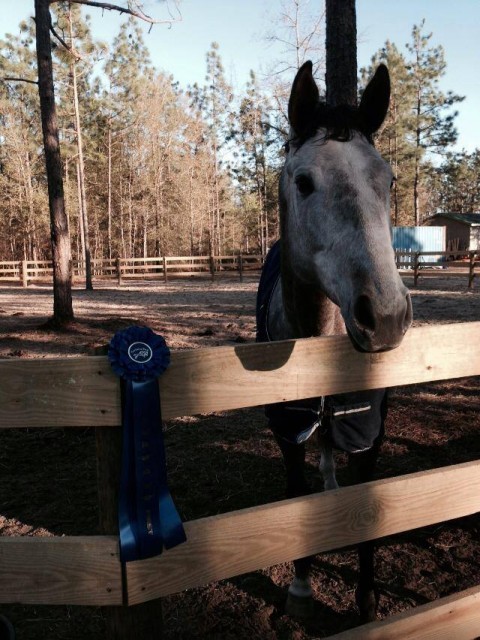 Full Gallop was a full day on Sunday. I competed Garth in Open Preliminary and Deszi made her debut in Open Novice. It was a long day, a full day and a great day.

Winds were high at the horse trials, and lifted Garth’s spirits far above his usual stature. I have realized that Esccord RGS may be prejudice. He finds paints, duns, and the occasional white horse upsetting. So much so, that he will rear, spin, and bolt to avoid being near them. Either that, or he’s just being a turkey.

In our dressage warm-up, he spooked laterally so extremely I was concerned he was going to trip and fall onto his side! Once he grew accustomed to the “others,” he had some lovely moments – including a trot lengthening that was so dramatic that it may have been an extension. Incredibly cool. Our test was calm and quiet compared to our warm-up. Despite our studs, the footing was a bit slippery and effected some of our movements. There were lovely moments, and some that could stand to be improved. 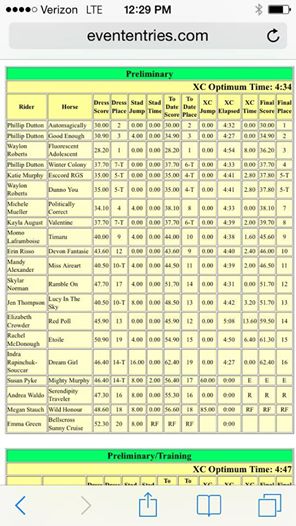 Stadium was a lovely course: nice lines, great flow, and fences softer in size for the level. Aside from my approach to one fence (and Garth proving he is made of gold), I felt it was one of our better rides. The triple was set at long distances – and thank heavens it was – I asked for the longer distance instead of the close and powerful stride (sorry, Kim). Garth compensated for my idiocy, and carried us through the line. We finished double clear.

The cross-country course was designed with the purpose of providing a galloping track. There were many softer questions and the course provided a nice move-up. There was a lot of distance between fences and it did not have the flow of the course earlier this month. During the ride, I had a great response from my leg but a deaf ear to the half halt. I was able to press him forward for the stride, but the adjustment was not there in time. Perhaps it was the wind, his lonely sister back at the trailer, or our softer XC bit – either way, Garth and I were not on par with one another this round. Although we jumped double clear to maintain a tie for 6th place (Event Entries reflects 5T) among 20 riders, it was not a stellar ride.

With Bromont in sight, this event proved to be an excellent reminder of our weaknesses. Garth has become incredibly fit while in Aiken. His trot sets and gallops are going well, and he is becoming a confident athlete. He came off the cross-country in good form and immediately recovered after our brief walk to the trailer. I suspect his fitness may directly relate to the exuberance at the start of the day.

Between rides on Garth, Desert Sonorous made her debut. She was a star! Deszi has earned the nickname “Deszi Do” while in Aiken because she gets it done, and all with a smile. She is a very cool horse who appreciates a partnership and will set the world on fire if you tell her she can. Originally, I planned to compete BN at Sporting Days but she had a slight nosebleed prior to the event. Two weeks off and she was back on track. We has schooled a lot of XC down here and she was bold, confident, and smart through and through. I felt Novice was well within her capabilities, serving as a confidence boost for her as she began her eventing career. This was her first horse trials. 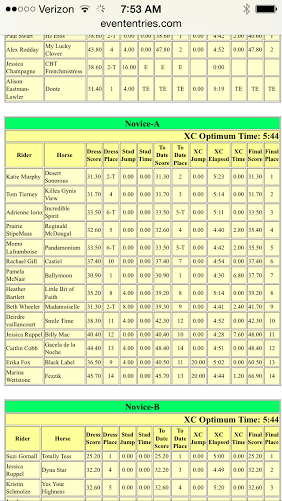 Although initially a bit up in the dressage warm-up, she handled the busy area and winds beautifully. She performed a very mannerly dressage test and tried hard to keep her focus. The only hiccup was after our entry and turn at C: the horse in the neighboring ring was working into the corner directly next to ours – this blew Deszi’s mind for a brief moment. A correction, and we were right back at the movement. The rings were close together and I think she thought that horse was coming directly at her. She kept her cool and was a very good girl. We were very proud of her! She tied for 2nd with a 31.3 in the division of 14.

By that afternoon, the winds were blowing the jump standards and fillers over. One rider had a standard crash to the ground when she was two strides out. Deszi and I were lucky, and the fences stayed up during our ride. She once again proved to be mature beyond her years. She marched into the stadium field, and carried on with a lovely canter that flowed fence to fence. A few looks here and there brought us to the trot and she carefully lifted herself out of stride over the fences. She jumped double clear and I think was quite proud of herself! The tie was broken and she maintained 2nd place.

The cross country course was lovely for this level. There was a quiet flow fence to fence with plenty of distance for a straight approach. The first water was an option, and Deszi cantered through it without a care. There was a sharp turn through the tree line between fields that had hard-packed clay – potentially slippery after all the rain. We came to a walk to carefully navigate the area, and carried on over a hanging log and softly over the trakehner. She was brilliant through the second water and confident up the mound and down the drop. She cantered the rest of the course with the same soft rhythm. When we finished, she seemed content and not the least bit fazed. Deszi looked at me as if to say “That was nice. What’s next?” On top of our wonderful rides, she won her division. Roger and I were beyond thrilled and so proud of her.

At the end of the day, Ruth Anne competed Allie in their first event together at the Tadpole level. They did a marvelous job! Sadly, I was riding during their dressage test and missed the fun. Their stadium was lovely and calm. Aside from a cheap rail – Allie felt no need to JUMP the fence when she could canter over it – it was a fabulous first outing. Their cross-country ride was a pleasure to watch: relaxed, rhythmical, and confident. They made it look easy. Ruth Anne came through the finish flags with a big smile and gave Allie a loving pat. They came home with 4th place. I am so thrilled for these two! This is the first of many fun and fabulous outings for this new partnership.

A magnitude of appreciation goes to Roger, who flew in for the long weekend to help, support and enjoy some southern sunshine. We had many thoughtful discussions about the horses, their performances, our weaknesses (horse and rider) and where to go from there. Roger may not ride, but he is there every stride with a very good understanding of what is happening. Sometimes he shocks me with his keen observations! Thank heavens for him – I could not have done this alone.