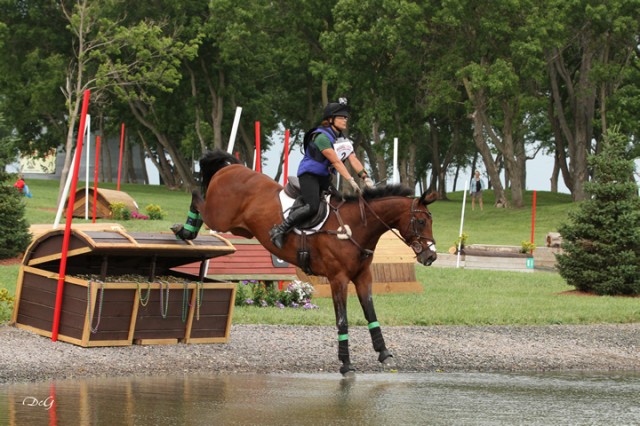 Area IV is reeling following yesterday’s announcement that Roebke’s Run is canceling all horse trials and making the Hector, Minnesota venue available to rent. The USEA confirmed to EN that they received a letter from Roebke’s Run requesting the cancellation of their events for 2018.

The conflict stems from choosing the dates for Roebke’s Run’s 2019 events. Brook Schweiss of Roebke’s Run told EN the family is declining to comment on the record at this time, but multiple comments have been posted on the venue’s Facebook page, including the text of email correspondence with Area IV Council Chair Kathy Kerns.

“After a meeting with our family we (are) moving towards not hosting any shows,” Brook wrote in an email dated December 22. “It has been very clear that the area does not support us.”

First held in 2010, Roebke’s Run has hosted horse trials twice a year at the Schweiss family’s Magister Equitum Stables, offering Beginner Novice though Intermediate levels, as well as a CIC1*/2* and CCI1*/2*. Roebke’s Run was the only venue in Area IV running an FEI competition.

“When we held our Area IV town hall meeting last year, we got a lot of flak from members about having Roebke’s Run back-to-back with Fox River Valley. They were very unhappy with that move, which they had not expressed to us before. We wanted to listen to our members,” Kathy said.

“Then at the annual meeting in December, it was announced that the AEC would be at the Kentucky Horse Park in 2019. I went back to three horse trials (Roebke’s Run, Silverwood and Dunnabeck) that will be affected by that in our area. Many of our members go to the Kentucky Horse Park to compete, so I told all three that if they thought the AEC would affect them adversely, we would support a date change even if it required an appeal.”

As a result, Roebke’s Run requested to move to Rebecca Farm’s date, as their original requested date would fall back-to-back with the AEC at the Kentucky Horse Park. “We were perfectly OK with that and we told them that, but they also asked if they could move (their other event) to June 29, which is the weekend after Fox River Valley. We told them we were not sure that was in their best interest. However, if they want those dates, they’ve got them.”

USEA CEO Rob Burk told EN this is an area matter the organization hopes can be resolved so Roebke’s Run will still run their events in 2018 and beyond. “Kathy Kerns has been working hard to resolve the concerns that Roebke’s Run has put forward,” he said.

While Roebke’s Run has already requested the cancellation of their 2018 events and posted a message on their website that all shows have been “terminated indefinitely,” Kathy said she hopes the Schweiss family will reconsider and emphasized that they can have their most recently requested 2019 dates of June 29-30 and July 27-28.

“We don’t want to lose Roebke’s Run. It is a tremendous event. The Schweisses have been fabulous supporters of eventing and the area,” Kathy said. “We have tried everything we could think of to try to get their numbers (of starters) up, which was why we suggested other dates so they didn’t run back-to-back with other events. I don’t think Fox River Valley’s numbers would be hurt if they run back-to-back. I think it’s Roebke’s Run that would be hurt, and I don’t want to see that happen.”

The problem of finding dates for events is not unique to Area IV, and the USEF and USEA are currently working towards completely revamping the calendar review process starting in 2020.

“As an Area Council, we have tried our darnedest to find a place where Roebke’s Run can sit and stay and be successful,” Kathy said. “Part of the problem is we have horse trials in Area IV that have been running many years longer than Roebke’s Run, and they hold onto their dates like they are precious gem stones. It’s no different than other areas. Many of our horse trials are held on public lands, so they are not easy to move.”

For example, Fox River Valley Pony Club Horse Trials run on public lands at the Barrington Hills Park District Riding Center. Organizer Kristy Yashinsky went to the FRVPC Horse Trials Advisory Board in an effort to move their 2019 date to give Roebke’s Run more breathing room on the calendar but was ultimately unsuccessful.

“Unfortunately they could not make it happen. Between trying to find a different date with the Barrington Hills Park Board, the Spring Lake Forest Preserve and the event’s donors, it became an insurmountable problem for them. But at least they tried, because we all value Roebke’s Run,” Kathy said.

“We want to put Roebke’s Run in a spot on the calendar so they have the best chance of being successful, but we will also give them exactly what they want and what they think will be successful. If there is a way we can fix this with the Schweisses, we will do it.”

Roebke’s Run declined to comment on the record for this story.