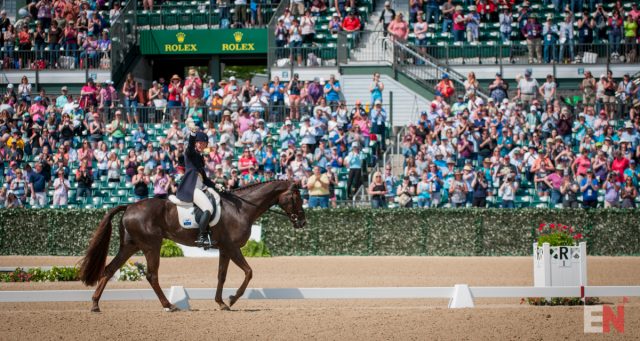 The Kentucky Horse Park will host AEC in 2019 and 2020! Photo by Leslie Threlkeld.

The USEA has named the Kentucky Horse Park in Lexington, Kentucky as the host site for the 2019 and 2020 American Eventing Championships.

“It will be an honor to have the AEC hosted by one of the crown jewel facilities in our sport,” USEA President Carol Kozlowski said. “I can attest to the thrill of galloping and jumping over some of the best ground and well-designed courses in the country, and I’m eager for our members to have the fantastic experience of competing at the Kentucky Horse Park.

“Everything that makes a championship really special will be found there, and I’ll do everything I can to be competing there myself!”

“It’s exciting to welcome the AEC to Kentucky,” EEI Board President Stewart Perry said. “Through our partnership with Mary Fike, we are looking forward to having a direct avenue to support all levels of our sport.”

Mary added: “We think it’s about time the AEC comes to the Horse Capital of the World! We are confident that the competitors who come to Kentucky will have an experience to remember at the Kentucky Horse Park.”

The AEC most recently completed a two-year run at Tryon International Equestrian Center in Mill Spring, North Carolina, host site of the 2018 FEI World Equestrian Games. In 2018 the AEC will move to the Colorado Horse Park in Parker, Colorado for one year before moving to Kentucky.

The Kentucky Horse Park will serve as the seventh venue to host the AEC. The championships were first held in 2004 at the Carolina Horse Park in Raeford, North Carolina. In 2007 the AEC moved to Lamplight Equestrian Center in Wayne, Illinois, then Chattahoochee Hills in Fairburn, Georgia in 2010.

The Texas Rose Horse Park in Tyler, Texas hosted the AEC from 2013 to 2015 before Tryon took over as host in 2016. Area VIII will host the AEC for the first time in the history of the championships when the Kentucky Horse Park takes over hosting duties in 2019.

“I am incredibly thankful to the Tryon Equestrian Partners for their amazing efforts as the hosts of the AEC in 2016 and 2017,” USEA CEO Rob Burk said. “We are also excited to work with the same organizing team at the 2018 AEC at the Colorado Horse Park. I know the TIEC ownership, managers and staff will continue to make it a hub of equestrian sports in America.

“I am also excited to go to bluegrass country for 2019 and beyond,” Rob added. “I can’t wait to see the looks on the faces of the AEC competitors as they complete the competition in the same stadium ridden in by the greatest riders in the world!”

The USEA is also “making plans to reduce the costs to (AEC) competitors starting in 2019” and said the move to the Kentucky Horse Park will not increase the cost of competing at AEC.

What do you think about the new host site for AEC in 2019 and 2020, EN? Are you excited for AEC to be hosted at the Kentucky Horse Park? Let us know your thoughts in the comments!

[USEA Selects Kentucky for the 2019 and 2020 American Eventing Championships]