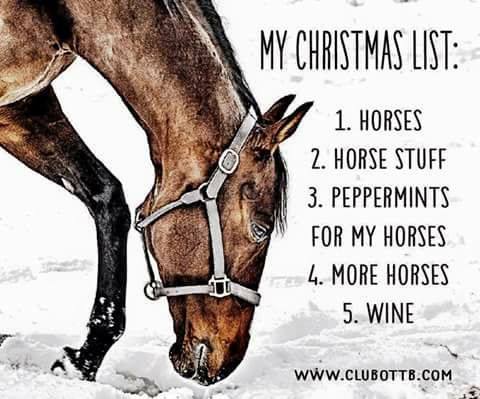 For real though. Photo courtesy of The Horseaholic FB.

Alright well December is already traveling at an alarming speed, and the holidays are right around the corner! I thought I was on top of my game, and did some Christmas shopping for friends in October, and then failed to do any since then. Face palm. Now I’m in a slight panic, seeing as I haven’t actually done much of anything, and I need to get my rear in gear!

In other news, the USEA Convention starts today in Long Beach, California! The convention will be live streamed for the first time thanks to Ride On Video, with the first meeting kicking off at noon PST. Click here to access the live stream.

Planning on going to the 2018 Land Rover Kentucky Three-Day Event in the spring. Get your tickets today as prices go up at midnight EST! [Buy Tickets]

We’re sad to report the passing of legend Bill Steinkraus, who died on November 29th at the age of 92. Bill was undoubtedly one of the greatest riders of all time, winning individual gold on Snowbound at the 1968 Mexico City Olympics, team silver in the 1982 Munich Olympics on Main Spring as well as team silver in 1960 in Rome on Riviera Wonder, and team bronze in 1952 in Helsinki on Hollandia. He competed on five Olympic teams for the United States, and will be sorely missed. [William C. “Bill” Steinkraus]

Eventing might be over for the year in the US, but it’s still poppin’ down in New Zealand this weekend with Puhinui International CCI3*. Ten combinations are set to start today, including Olympian and Badminton winner Jock Paget, who will be riding Heelan Tompkin’s Snow Leopard in the horse’s first CCI3*. I wouldn’t bet on Jock though, as he might be leaving mid-competition seeing as his wife is overdue to give birth! [All Roads Lead to Puhinui]

Just to put you in the Christmas spirit….did you see these photos from the Christmas parade in Middleburg? If you’re not already familiar, let me tell  you, it is a sight for horse lovers’ eyes. [Christmas in Horse Country]

Sorry, fans of homeopathy, but Britain’s Royal College of Veterinary Surgeon’s says it’s all hokey. Saying that homeopathy is not “based on sound scientific principles”, they stated, “We would like to highlight our commitment to promoting the advancement of veterinary medicine on sound scientific principles and to reiterate the fundamental obligation on our members as practitioners within a science-based profession, which is to make animal welfare their first consideration. In fulfilling this obligation, we expect treatments offered by veterinary surgeons are underpinned by a recognised evidence base or sound scientific principles. Veterinary surgeons should not make unproven claims about any treatments, including prophylactic treatments. [Homeopathy Not Scientifically Sound]

Remember Consensus? He completed Rolex with Julie Norman Shamburger in 2015 and now he is rocking around Prelim with a young rider!