All eyes were on the young stock at Woodside yesterday as the future of the sport was on display at the USEA Young Event Horse West Coast Championship.

The YEH program looks to identify future team horses by judging 4- and 5-year-olds in three categories: conformation, dressage and jumping. Here’s your quick ‘n dirty recap on what went down: 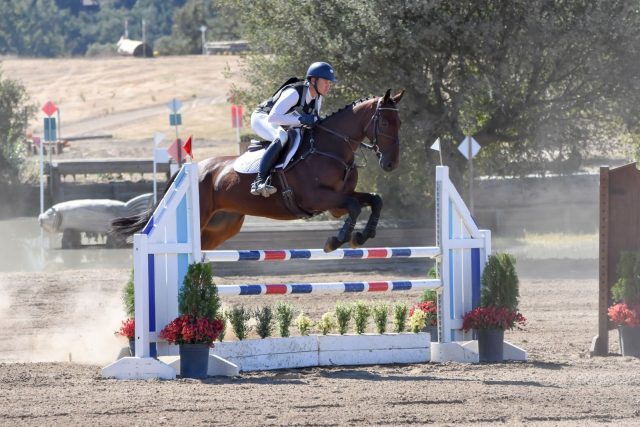 Bonner Carpenter’s Summerbridge Parc proved he’s made of the right stuff winning the 5-year-old Championship title with Tamie Smith riding. “Wally,” an Irish Sport Horse gelding by Ramiro B and out of Summerbridge Lilly, had far and away the best finishing score on 80.81%.

He was talent spotted by Tamie when she was based out of Rodney Powell’s yard last fall in a moment which she describes as “love at first sight.”

The 5-year-old Reserve Champion was 2 A.M. Sound familiar? It should because this Dutch Warmblood (Sheraton x Regina K) was the 2016 East Coast 4-year-old Champion with Matt Flynn. Looks like things haven’t changed with his new owner, 16-year-old Charlotte Babbitt.

There’s more than just bragging rights up for grabs for these 5-year-olds, the Holekamp/Turner Le Lion d’Angers Grant will be awarded to the top horse from this class who is qualified and willing to compete in the FEI World Breeding Eventing Championships in Le Lion d’Angers in 2019.

Meanwhile in the 4-year-old camp, Sunsprite Ranch’s Sunsprite’s Watusi came out on top with 78.05%. The Oldenburg gelding (Wild Dance x Kamirette) was bred by Pamela Duffy and Don Trotter of Sunsprite Warmbloods.

Another Oldenburg was hot on his heels in second place. Piloted by Nicole Carroll, Nancy Read’s CrossCross PCH (by Con Capilot) finished with 77.47%. The MB Group’s MB MaiStein deserves a special shout out for earning the best conformation (12.45/15) and dressage (29.96/35) scores of this group.

The judging panel of Judy Bradwell, Mark Weissbecker and Faith Fessenden will head to Fair Hill where they will judge the YEH East Coast Championship. You can follow along with in depth coverage on USEA’s Instagram.

Remember these names because you never know when they might pop up on an international stage. For example, this year’s Blenheim CCI3* winner Cooley Cross Border won the USEA YEH East Coast Championship in 2012.