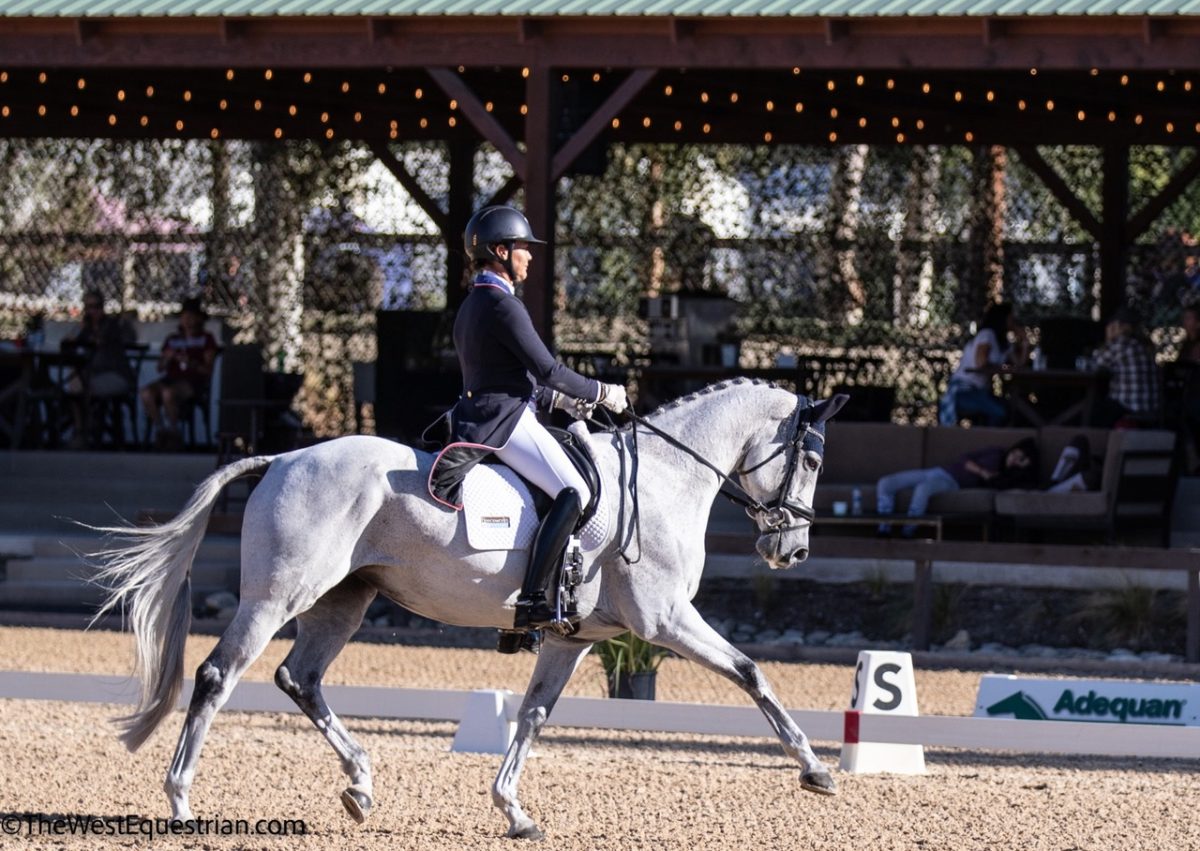 It wouldn’t seem a California competition without Tokyo Olympic reserve rider Tamie Smith leading at least one international division. With four horses in the event, Tamie’s final ride of the day, Judith McSwain’s Fleeceworks Royal, was the one to put her atop, in this case of the CCI4*-L.  Their 24.9 score from Ground Jury Christina Klingspor of Sweden and the USA’s Marilyn Payne is a substantial lead heading into a Clayton Fredericks’ cross-country track that’s described as big, rigorous and fully up to the level. 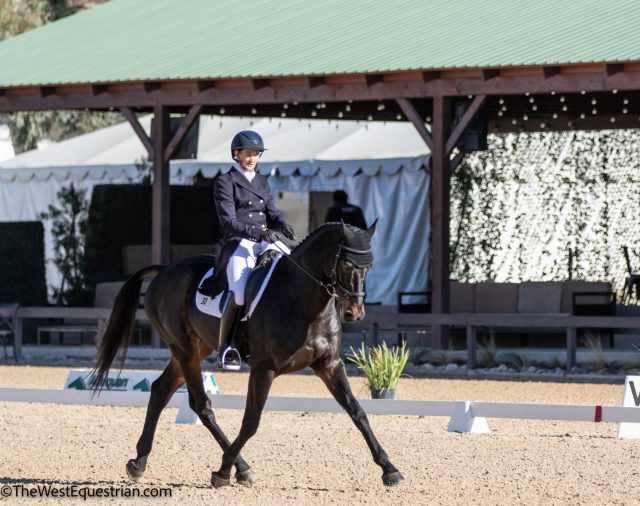 Tamie is followed by Amber Birtcil, who continues a stellar season with Cinzano on a 28.1. 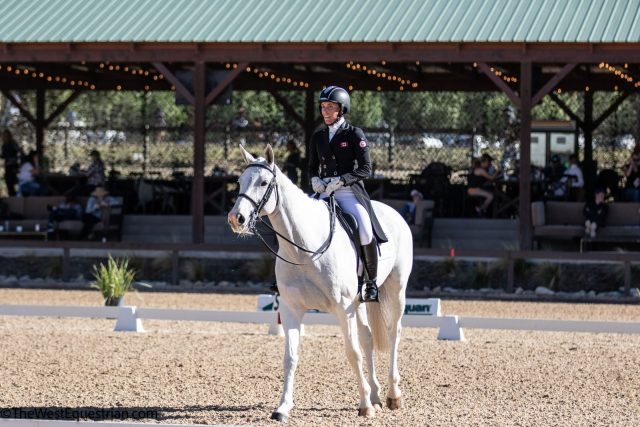 Behind these two familiar California professionals, Canadian Dana Cooke and FEI Mississippi are third on a 29.2.

Tamie’s world travels and Fleecework Royal’s recovery from an unusual condition — an airway obstruction — have had the experienced Advanced mare out of the spotlight for much of the last 18 months. But “Rory” came roaring back today with a characteristically lovely dressage test.

Having recently seen the world’s biggest courses — Tokyo, Aachen, Boekelo, for example — Tamie has a worldly perspective on the route she and the 4*’s 10 other contenders will face tomorrow. “You do look at ‘home’ with different eyes because you’re more experienced with championship courses,” she says.  “I can tell you, this one is right up there.” She’s confident of Fleeceworks Royal’s ability to navigate it. She’s also confident of last year’s National 3*-L Champion, Elliot-V, her second ride in the division, but this is their first outing in the division and she’ll need to give the relatively green horse a different ride.

Galway Downs’ ascendance in the national eventing realm is drawing entrants from far and wide, but most likely it’s Canada’s Dana Cooke who’s traveled the farthest. Dana and her 2019 Pan Am Games team bronze medal partner FE Mississippi made the three-day haul from their North Carolina base and already consider it worthwhile. “We’ve been working on dressage: trying to break into the 20s consistently and clean things up,” she explains. “I was really happy with her today.”

Dana sourced the 11-year-old Pinto Wurttenberg from course designer Clayton Fredericks but doubts that will give her any edge tomorrow. “It’s quite a technical track and there is a lot of work to do all the way around. I think we’ll be good, but we’ll have to keep riding from start to end.”

Dana was last at Galway Downs about 15 years ago and is “highly impressed. They have definitely upped the standards of how it looks. It’s beautiful and Clayton has done a fabulous job designing.” 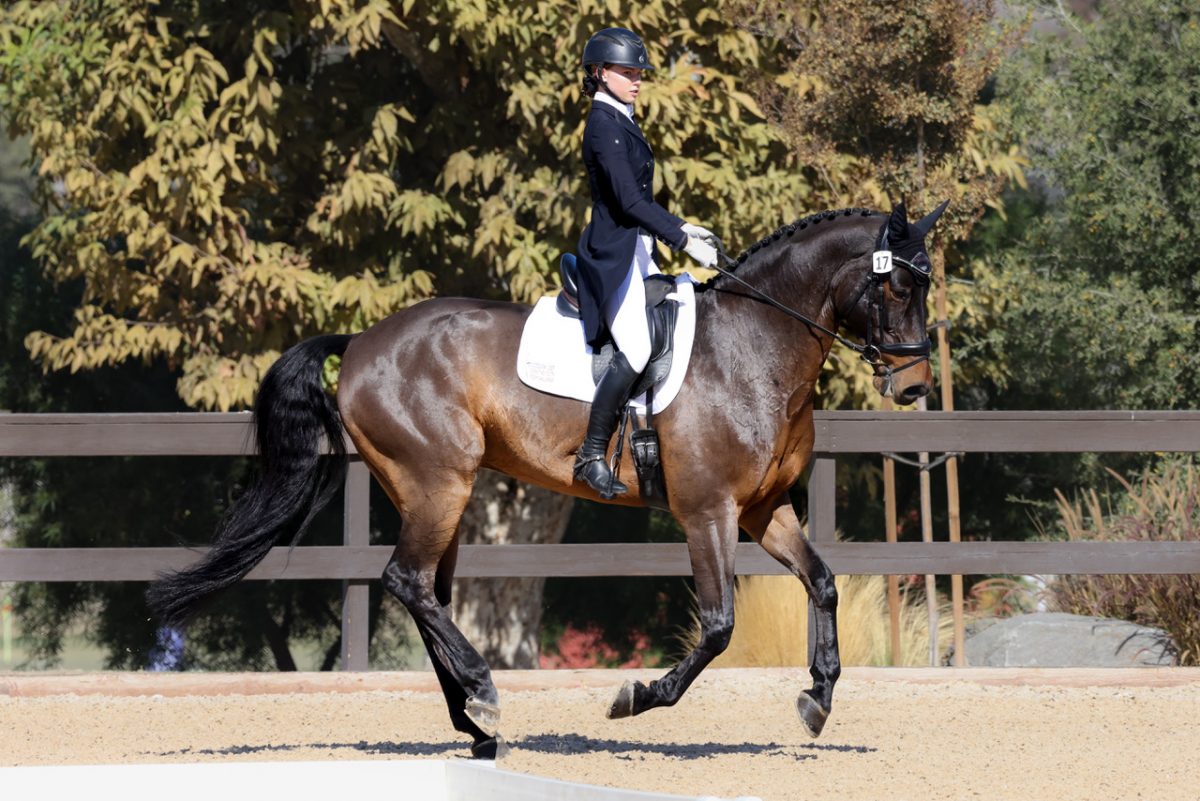 This year’s Galway Downs International proudly hosts the Adequan USEF Eventing Youth Team Challenge West Coast Finals, so it’s appropriate that two of its contenders — Haley Turner and Audrey Sanborn — are in the top three of the 21-pair CCI3*-L field after dressage.

Nearly 19-year-old Haley and Shadow Inspector extend their long hot streak with a 25.3 test to lead the pack. 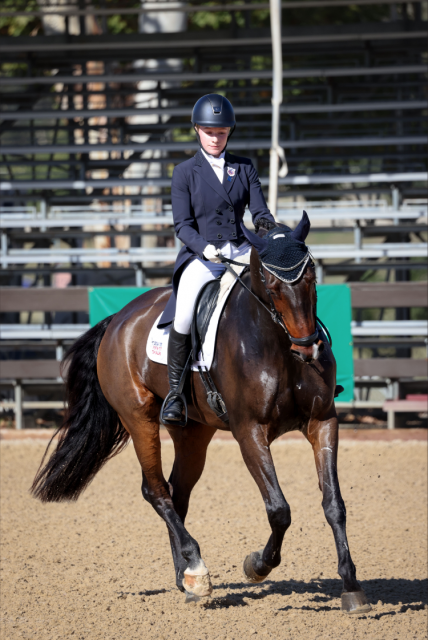 The 3* Ground Jury is President Christina Klingsport of Sweden and Marilyn Payne of the USA. 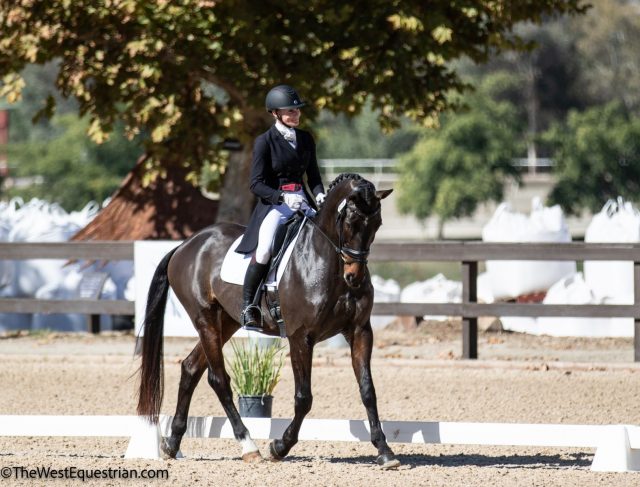 Kayleen Crowley & Whiskey Up in the CCI3*-L. Photo by theWestEquestrian.com.

A student of Bea and Derek DiGrazia in Northern California, Haley says she hasn’t yet gotten tired of answering questions about her long string of successes. “I’m grateful for it all!” she says. Haley and the 11-year-old Irish Sport Horse have tackled all the FEI levels together and this is their 3*-L debut. “We’ve been working at having a breakthrough at the FEI level and this was the best he’s ever felt in a test. He was very responsive to my leg through the entire test and had more expression in his extensions, which we’ve been working on.”

Haley is also grateful to have international eventer Lauren Billys coaching her this weekend. She also credits work with Volker Brommann as a big contribution to the team effort that’s helped her reach the dressage goals on display today.

Being part of the Adequan USEF Youth Eventing Team Challenge West Coast Finals is another source of appreciation, says Haley. That includes the qualifiers that preceded it at the Aspen Farms Horse Trials and Twin Rivers Fall International. “It’s a great way to meet other riders, have that extra level of competition and national recognition. Along with all of Galway Downs’ sponsors, I really appreciate Adequan sponsoring the event.” 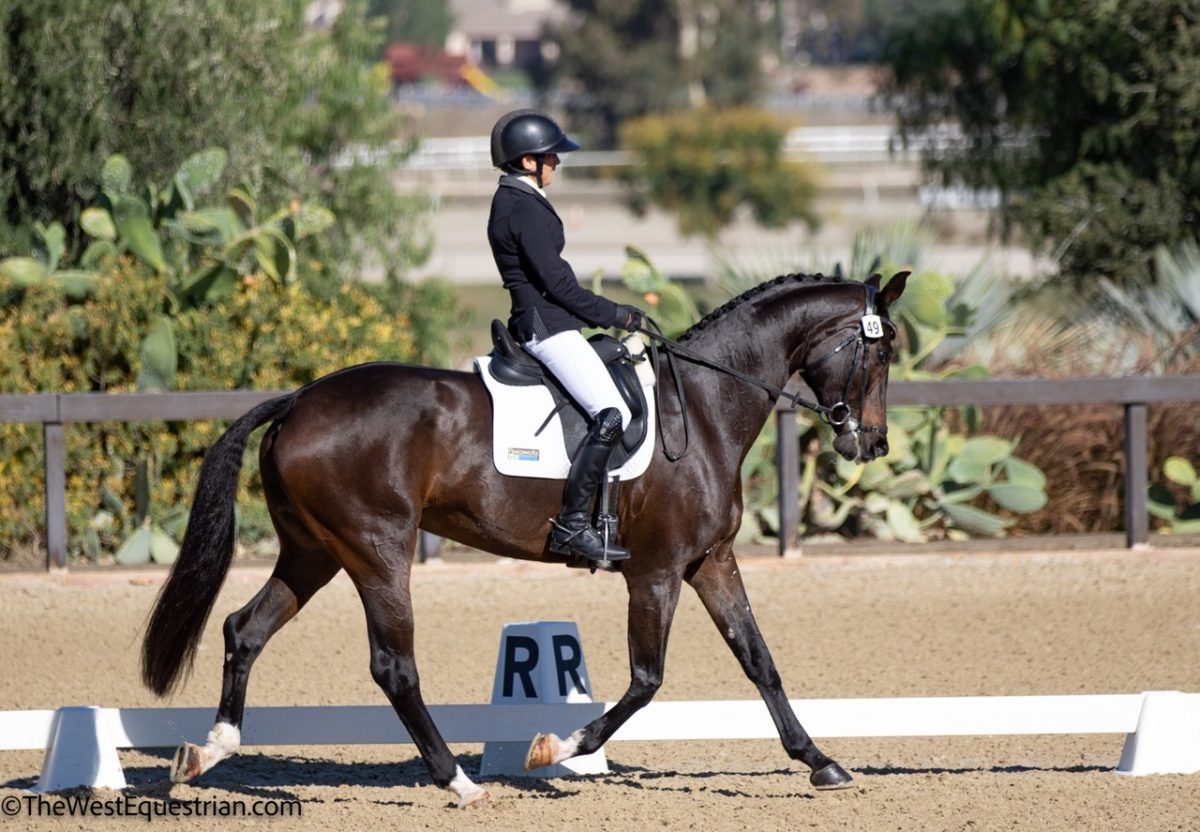 Taren Hoffos and the 10-year-old Oldenburg mare Regalla inspired “ohs and ahs” from the railbirds as they laid down a 26.1 to trail blaze the 35-pair CCI2*-L division in front of Ground Jury Robert Stevenson and Amanda Miller, both of the USA. 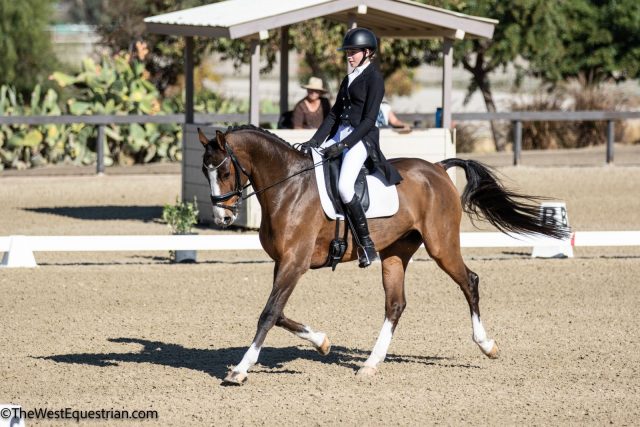 Hot on their hooves is Rhiannon Gorin and CSF Handsome sitting second on a 26.7. Kaylawna Smith-Cook and AEV Above Authority are third on a 27.

Purchased in utero, the Sir Donnerhall mare Regalla won her first outing at the level, the CCI2*-S at Woodside in October.  “It’s really special to be riding her having had her in the family since before she was born,” says Taren of the horse owned by her mother Carolyn Hoffos.

The mare’s breeding suggests a dressage career and two years of dressage specific training reinforced that. However, at a certain point, “she got bored,” Taren explains. “So we said, ‘Let’s see if she can jump.'” Friday’s course will require that of her and Taren is confident. “She is ridiculously brave and a great jumper, so cross-country is really fun. She attacks the course and wants to go fast. She’s so responsive, it’s easy to go fast because I know she’ll come back.”

The Hoffos family owns the Copper Meadows training and show venue in nearby Ramona, giving Taren a unique perspective as a fellow USEA Area VI event organizer. Galway Downs organizer Robert Kellerhouse was Area VI’s “Organizer of the Year for a reason,” Taren observes. “He is constantly improving Galway Downs and the changes that he makes and the vision he has for it are amazing. I’ve been coming here since I was 12 years old and it’s unrecognizable.”

The venue’s amenities and the competition’s quality improvements are rising tides that lift all boats on the West Coast eventing scene, Taren notes. “You come to an event like this and you get the atmosphere and the presence of being somewhere fancy and intimidating. That’s good because you can feel how you and your horse react with that. It feels very big time.” 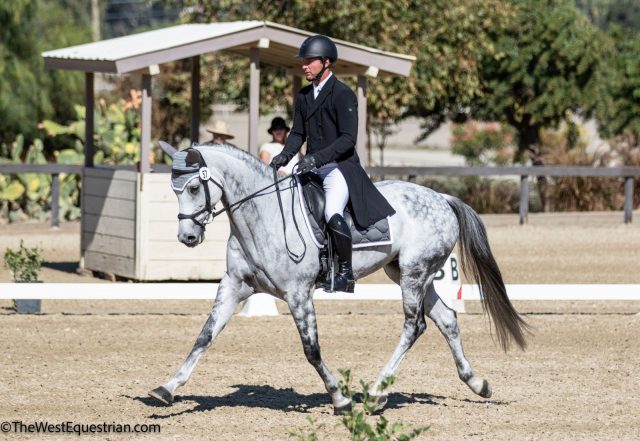 FEI cross-country starts with 3* at 9:30, followed by 4* at 11:20 and 2* at 12:30, while  competition starts or continues in all Horse Trials and the special Challenge divisions that have become very popular. 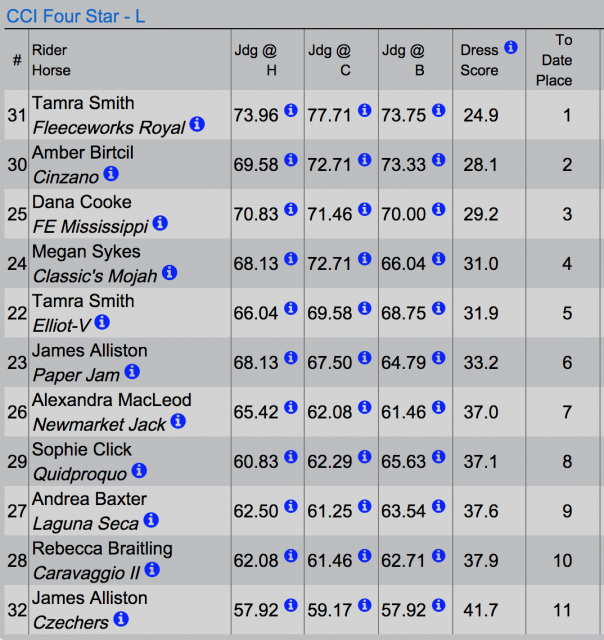 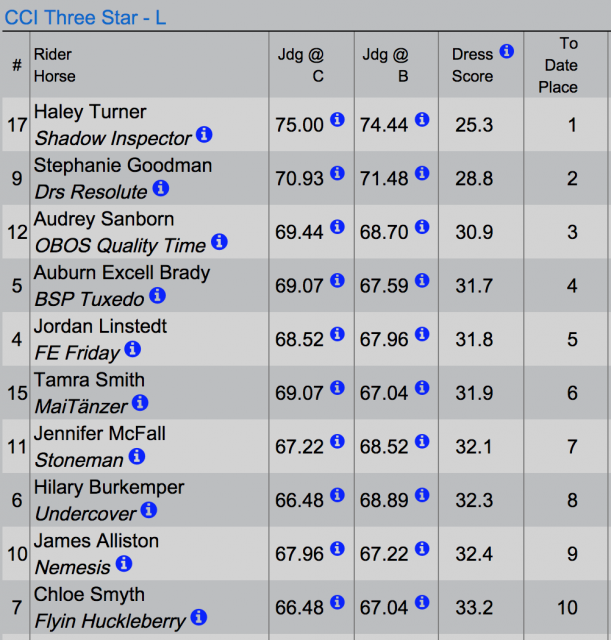 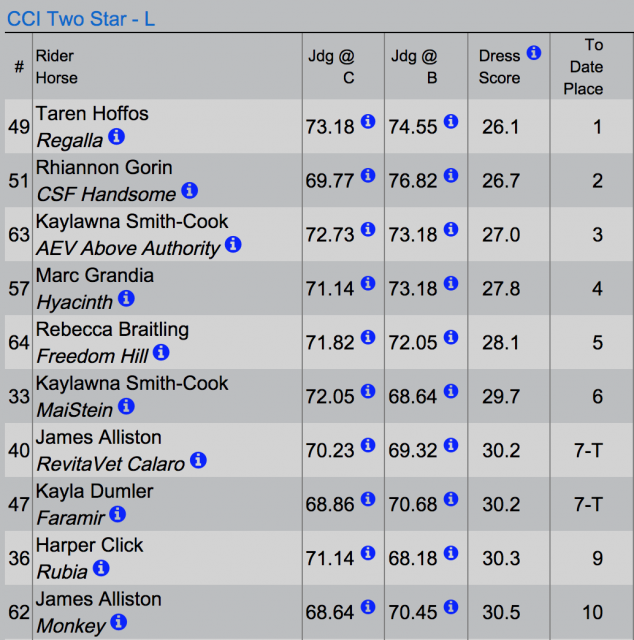