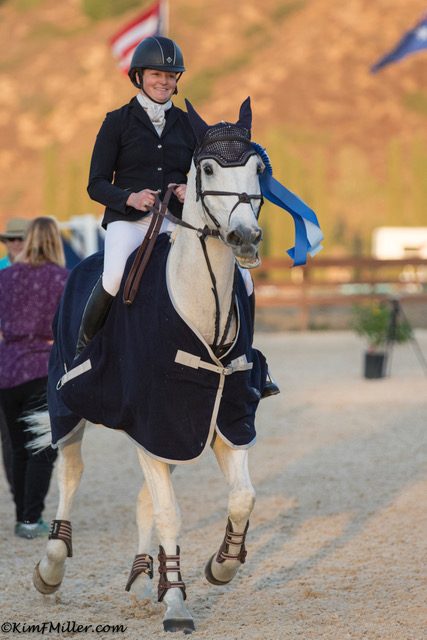 Whitney Tucker Billeter and Bill’s Midnight Magic had top professionals and rising equine stars hot on their heels throughout the Hylofit USEA Classic Series Training Three Day, a marquee event of the Galway Downs International. Riding last in front of a buzzing crowd in the VIP tent, Billeter achieved her main goal “of trying not to help him too much. That usually doesn’t work out too well.”

“I tried to think as if we were just doing a course at home and that there was not a big crowd watching.” In that crowd was “Billy’s” owner, John Herich, who lives too far away to see his horse in action very often. The Classic format has benefits for even experienced horses like Billy and the rider, Billeter noted. But one of the big reasons for entering this one was providing Billy’s owner the chance to see the 15-year-old Hanoverian shine.

Some might have struggled with the night’s pressure, but Billeter rode to plan finishing on their 25.90 dressage to win in front of happy friends and supporters. 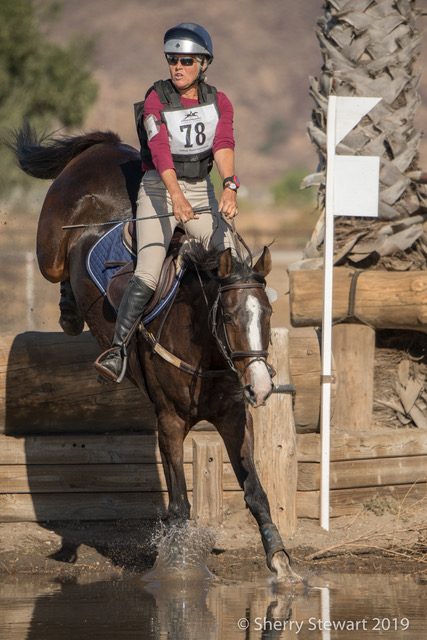 Arizona-based Jennifer Miller said it was sweet to finish on Bon Bon’s 28.30 dressage score. To finish reserve in a format she admires and has contested for many years was icing on the cake, said the equine veterinarian and amateur competitor. Miller has owned the 13-year-old Dutch Warmblood mare since Bon Bon was 4. She’d been “a back-up horse,” but is clearly assuming a starring role.

“I thought it was a pretty challenging Training course,” Miller said of Friday’s track. “She rose to the occasion, hunting out the next fence and giving me a great ride. I found the (late afternoon) lighting a little challenging in show jumping, and she was very generous with me. I just tried to stay out of her way.” 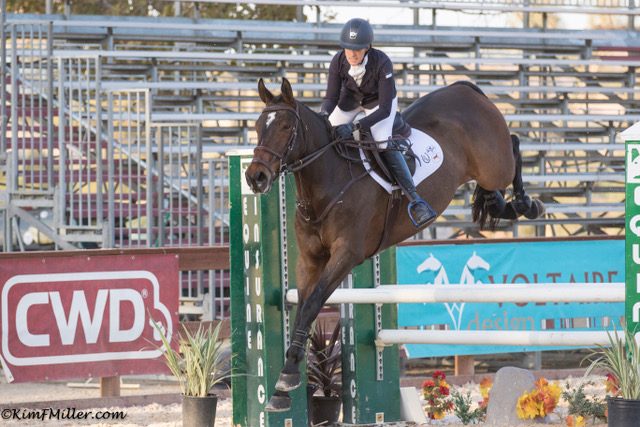 Last year’s Training Three Day winner Bec Braitling finished third, this year with a new horse, Galwaybay Merbantos. Braitling was thrilled with the 7-year-old Irish Sporthorse and described the victory as a game changer for the horse’s next steps. He’s owned by amateur rider Jenny Ramirez, who now has to decide whether to let her coach continue their great start together or fulfill original plans that she would campaign the horse herself. 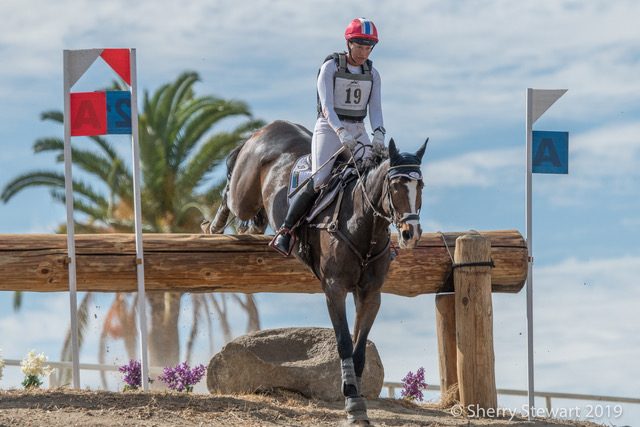 Tamie Smith is “only” riding five horses at the Galway Downs International this weekend – a bit less than is often the case. She compensated for the “shortfall” by assuring that three of them are leading their divisions going into tomorrow’s stadium jumping finalé.

En Vogue has a rail-plus lead in the CCI4*-L with a 28.50; Danito is dominating the CCI3*-L on his 24.30 and Elliot-V leads the Open Intermediate with a relatively slim 1.10 margin. On her own No App For That, Smith is tied with her daughter, young professional Kaylawna Smith-Cook, for fifth in the 3*, and Mai Stein is 3rd in the 2*-L. All in a weekend’s work for the busy professional.

“There’s a lot of work to do tomorrow,” Smith was quick to acknowledge. Nonetheless, “It’s been a pretty good day!”

The 4* field narrowed over Jay Hambly’s cross-country track. Sara Mittleider and La Paz maintained their #2 spot on a 33.30 and Gina Economou and Exclusive sit third on a 40.40. Leah Breakey and Master Class are fourth on a 43.40. Marissa Nielsen and Vinetta M retired after refusals at fence 12, and Marc Grandia and Campari FFF had the misfortune of missing fence 24 all together – just one fence from the last on course.

Even with new bumps, twists and turns added to the 25-effort course, Galway’s dirt track is mostly flat, helping explain all four remaining pairs finishing within the time.

Although Smith initially thought those twists and turns might make the time difficult to meet, it was clear early that she was in for a worry-free ride on the 14-year-old Hanoverian mare owned by Ruth Bley. Out of the box, fences 1 and 2, a lodge and a large brush table, “She jumped them so easily it was amazing.” Smith attributes the mare’s smooth step up to this level to the training foundation established by Bella Mobray and Kimmy Steinbeck, who brought the mare along before Smith got the ride. “This is what happens when you move up a horse that has the right foundation. It’s when there’s holes in the training that you have problems.”

A good look coming down to the water that started the course’s third water obstacle, the Orca complex, illustrated one reason En Vogue made the time with relative ease, Smith said. “She’s careful. I can come in at speed and she backs herself up and balances herself, while she keeps coming. It’s a cool feeling.” The Orca whale in the middle of that 18ABC complex has been a heartbreaker for many in the past, Smith noted. This year, she described it as the highest difficulty element on a track of otherwise medium difficultly for the level – on both the 4* and 3* runs.

Veteran 5* rider competitor Sara Mittleider was thrilled with another steadily improving outing from La Paz, a 10-year-old Hungarian Sport Horse. In his fourth FEI trip and first 4*-L, the gelding showed new levels of maturation and ease when presented with even the trickiest elements. In Mittleider’s view, that was the 11A,B,C “moat” obstacle. “There was a lot there and you had to go at it with a good pace without a lot of time to react. I wasn’t sure he had the experience to handle it, but he did and I was tickled pink!” The run was also the first time she’d pressed La Paz to make the time, and he handled that with ease, too.

Gina Economou was thrilled with Exclusive’s performance. “I just wanted to give him the ride he deserved,” she said of their fault-free cross-country trip. Making the time with the 10-year-old Dutch Warmblood was a special accomplishment she attributed to trusting him with more free rein than in the past. 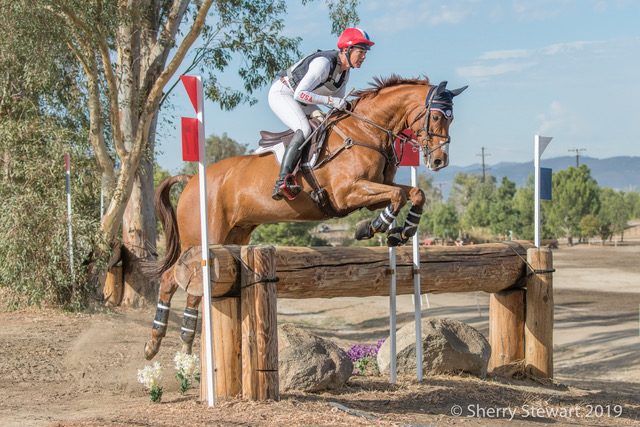 Tamie Smith and Ruth Bley’s Danito, the 10-year-old Hanoverian, sailed over cross-country. Smith’s main worry was herself. “I was actually nervous on him because he’s won so much, everybody expects that. It’s way harder to keep winning on a horse that’s already won multiple times.”

They kept their two-rail lead over Asia Vedder and Isi, who added nothing to their 32.30 dressage score in the 9-year-old German Thoroughbred’s first long format at this level. It’s a great follow up to the pair’s last outing, at Woodside in early October, when the accomplished amateur rider lost their CCI3*-S lead in the final cross-country phase by mistakenly jumping a 4* fence. She was able to finish the course, which may have helped prepare them for today’s good outing. Galway Downs-based Erin Kellerhouse and the 8-year-old Irish Sporthorse Woodford Reserve are a close third on a 32.50 dressage score.

Today’s cross-course only changed this division’s standings slightly. Jess Hargrave and Regenmann’s had stood second, but a refusal at fence 20 dropped them out of the top rungs. Time was a factor for this field of 13 starters, with seven incurring time penalties. 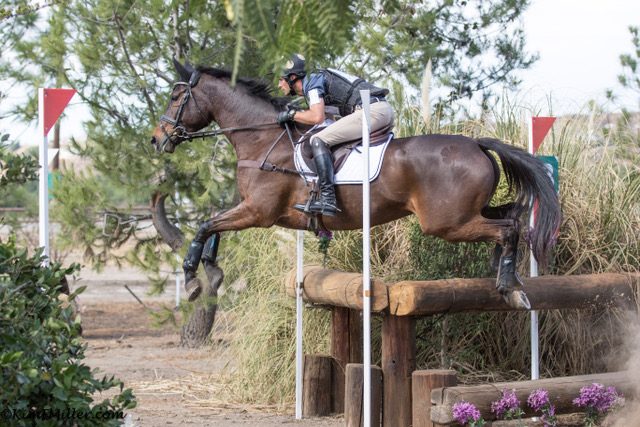 David Kos and Stunner added just a .40 time penalty to maintain their lead in the CCI2-L* lead on a 25.80. But there’s less than a rail to spare, with Olivia Loiacono-Putrino and Under The Spotlight adding nothing to carry a 27.90, and Tamie Smith and MaiStein right behind on their 29.

The 6-year-old Stunner owned by Vicky Kos is a homebred sired by Escudo II. Stunner was started by Kos’ professional and life partner Robyn Fisher, “but was a little too strong and wild for her.” He describes the appropriately-named Stunner as a “really fun and opinionated.” He has excelled in dressage of late, starting his last three outings with the lead from that phase. Establishing a pace to allow more shape over the fences was a goal today and the course’s many interesting features helped achieve that. “It was a really nice galloping course with lots to look at,” Kos said. Show jumping has sometimes been an issue because “he can be a bit lackadaisical.” The rider predicted that having stadium follow cross-country will help with rideability during Sunday’s final phase. 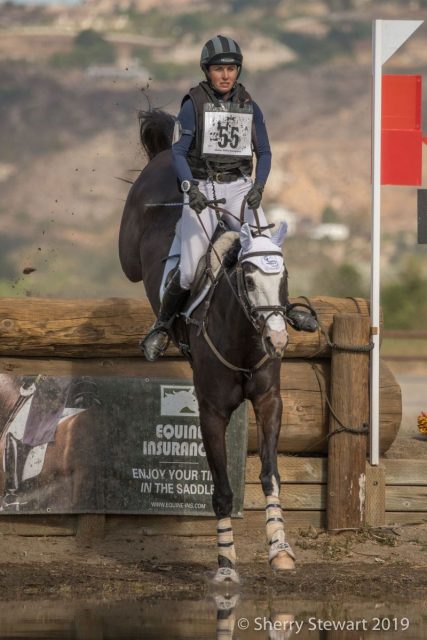 Olivia Loiacono Putrino and Under the Spotlight. Photo by Sherry Stewart.

As always, anything can happen on Sunday. Accomplished amateur and one of Tamie Smith’s top owners, Ruth Bley, sits fourth with a clean cross-country effort on Rodrigue Du Granit and a 31.80 score. And, 15 year old Meg Pellegrini and her mighty Connemara pony Ganymede can never be counted out. They’re 5th on a 32.10.

Many thanks to Sherry Stewart for these photos from cross country day at Galway Downs: 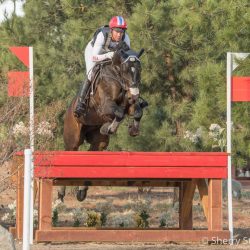 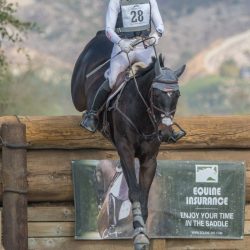 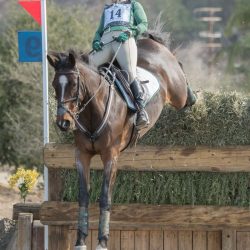 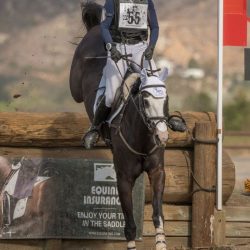 Olivia Loiacono Putrino and Under the Spotlight. Photo by Sherry Stewart. 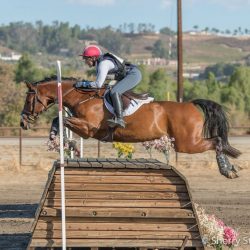 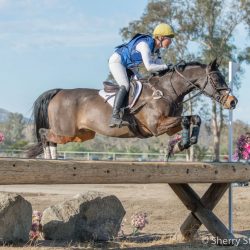 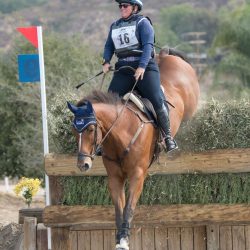 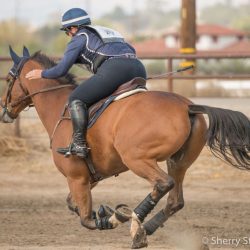 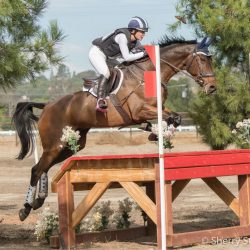 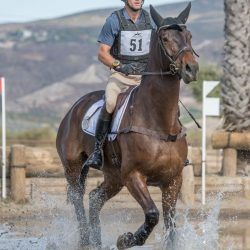 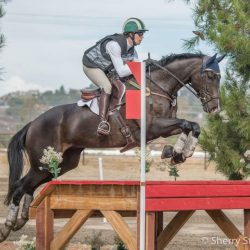 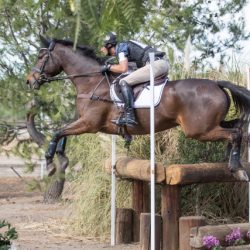 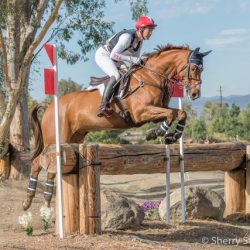 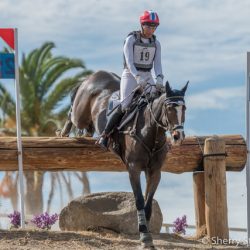