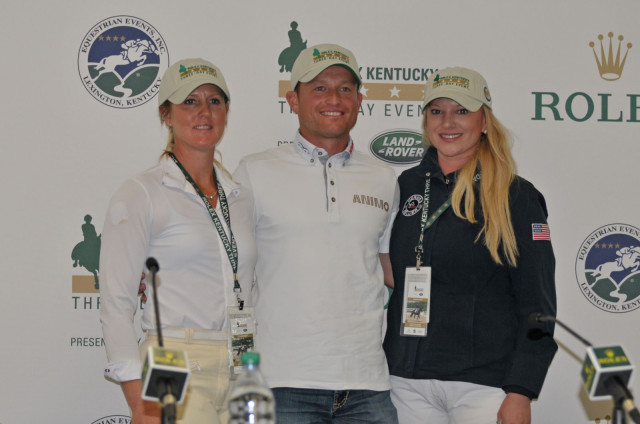 The top three following dressage, Michael Jung, Allison Springer and Marilyn Little, talked about strategy in the day two press conference. The current forecast is calling for an 80% chance of rain, including thunderstorms, for basically the whole day. 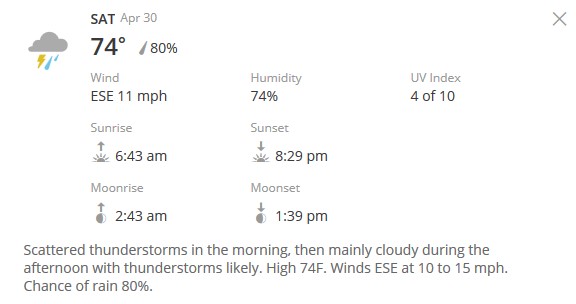 The general consensus among the riders is that the changes to Derek di Grazia’s course this year will make for a very challenging day tomorrow. Here are some of the best quotes from this afternoon’s press conference, including the rider’s thoughts on their dressage rides.

On being back at Rolex after missing the 2015 event: It’s always so emotional and wonderful to be here. It’s such a long partnership with that horse. He’s tricky, but it brings a tear to my eye to be able to be here. To hear the crowd cheering you on — it’s just a great feeling here.

On her overall impressions of her test: “I think the 2014 test was a tick better. I feel like I was sneaking through the walk here. He was great, but I certainly was praying for the walk to get done with and the rein back to not be too exciting. But I was thrilled with him.”

On how she feels about the track tomorrow: “To me, this is probably the most tiring track I’ve seen at Rolex. It used to be that we had this really nice long hill down from the tents back through the steeplechase field and it seems to be they could catch their breath and you could make up a little bit of time. I don’t think there’s anywhere to make time at the end. You have to be really smart in your turns everywhere and kick away from the fences. I just think it’s a very tiring track. Fitness is going to be different.”

On her spot as the last rider on course: “I guess that could totally depend on the weather. If it rains quite a bit and the footing deteriorates, I can’t imagine it would be an advantage to go at the end. But you’re just dealt the cards you’re dealt and you deal with it. Right now, I have my plan and you have to be wise and be a horseman and adjust as needed.”

On the cross country course: “Everything looks a little big to me right now. I’ve only done two Intermediates this season so I’ve lost a little perspective. But I have a very experienced horse with a big heart. I think that the weather will play a very big role; we’re all hoping for as dry of a day as possible. The footing feels very nice out there right now. I go later — and obviously Allison goes very late — so we’ll both be hoping that we’re not up to our knees.”

On her dressage test: “I’ve had tests where there were some more moments of brilliance and we had a few mistakes that were disappointing. But it was certainly one of the more relaxed tests and I was quite pleased to see that. She wants to be a reliable horse in dressage and I’d like to be able to carry that relaxation into the future tests and also bring back a little of the sparkle that I felt before.”

On his strategy tomorrow given the forecast: “We will see how is the weather tomorrow. At the moment, we try to go fast because I think my mare is in a very good form. She feels very happy and very strong, but it can change tomorrow morning.”

On his thoughts on going for the Grand Slam: “It’s very important. For me, it’s a long trip to here, and I’m not coming to here to have a nice holiday! When I come to here, I try to win but it depends also (on) the horse. Sometimes the weather is not so good or the horse doesn’t feel so good or you lost a shoe on the track and you go more slow — in the end, it’s very important that you have to finish the competition with a healthy horse and then the season can go on.

Watch the whole press conference here, and stay tuned tomorrow for the press conference which we will be live streaming on our Facebook page. We’ll try to ask some of our readers’ questions in tomorrow’s session!