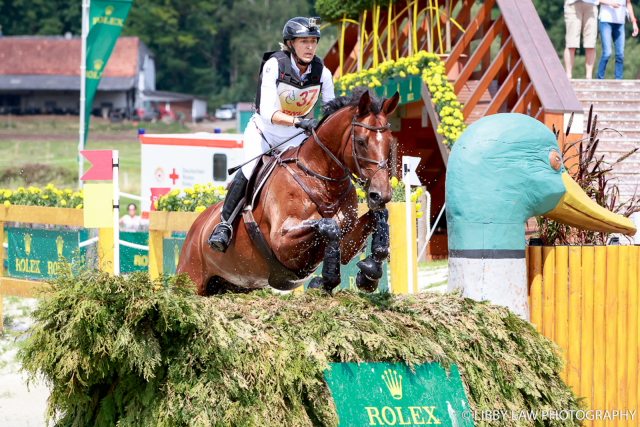 Ingrid Klimke and Horseware Hale Bob stormed around Rüdiger Schwarz’s cross country course with the fastest round of the day to taking the win in the Aachen CICO3* and lead the German team to victory in the Nations Cup on home soil.

The German team added just 6 total penalties after dressage to dominate the Nations Cup leaderboard on a final score of 107.00. Michael Jung and La Biosthetique Sam FBW finished second on 34.7 with the next fastest clear round inside the time. Sandra Auffarth and Opgun Louvo added 2 time penalties on cross country to finish fourth on 37.8.

Shane Rose and CP Qualified finished inside the top three for a second consecutive year for Australia, finishing 2 seconds over the optimum time to place third on 37.5. We saw five finishing scores in the 30s, including Mark Todd and Leonidas II, one of the five combinations that made the time to finish fifth on 38.1.

Chris Burton and Nobilis 18 returned with a bang in their first international run since winning Burghley last year, adding no penalties to their dressage score to finish sixth on 40.6. Finishing a second team rider inside the top 10 boosted Australia to a second-place result in the Nations Cup on a final score of 152.6 — a full 45 penalties behind the dominant Germans. 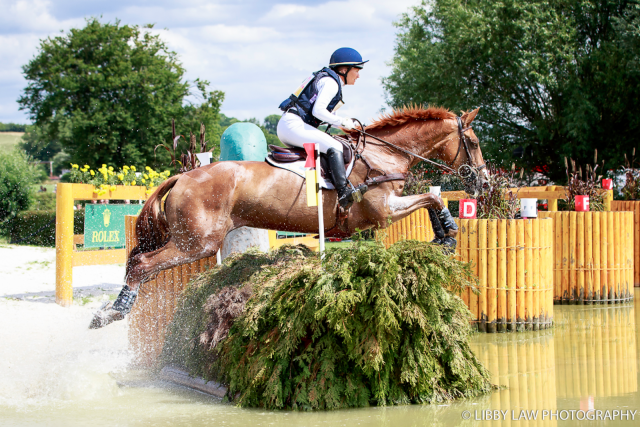 Hannah Sue Burnett and Jacqueline Mars’ RF Demeter delivered a foot-perfect round, sans a hairy moment in the main arena at the end of the course over a massive table at fence 25. Hannah stuck the landing and cruised home with 3.2 time penalties to finish seventh on 42.5 for Team USA. That is RF Demeter’s best international finishing score since 2013 and the second best of her entire career, which spans 41 completions.

Sweden finished third in the Nations Cup on 160.6 with two riders inside the top 15. Sara Algotsson Ostholt and Reality 39 added 6 cross country time penalties to complete on 47.8 for 11th place. Louise Svensson Jähde and Wieloch’s Utah Sun also finished with 6 time penalties to place 12th on a final score of 48.2. 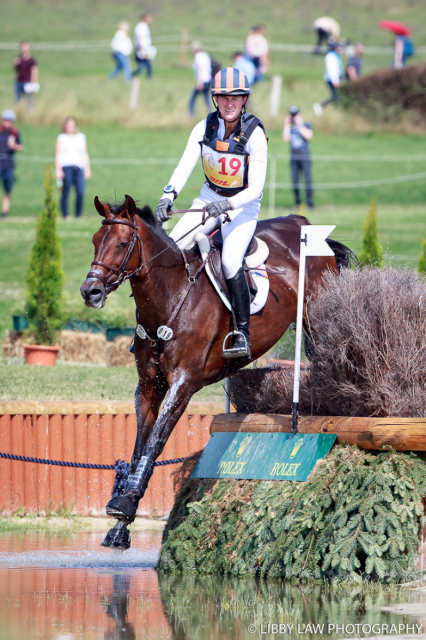 Lauren Kieffer and Veronica at the first water complex prior to their fall. Photo by Libby Law Photography.

Lauren Kieffer and Team Rebecca’s Veronica sat 15th after show jumping and unfortunately fell at the angled brushes at fence 13 when the mare left a leg at the second element. EN confirmed that both Lauren and Veronica are OK after their fall.

Six of the 37 starters were eliminated on cross country, giving us an 84% completion rate; 59% of starters jumped clear cross country rounds, with 14% making the optimum time. Click here to view final scores.

Many thanks to Libby Law Photography for providing us with beautiful photos of Team USA during Aachen. Go Eventing.