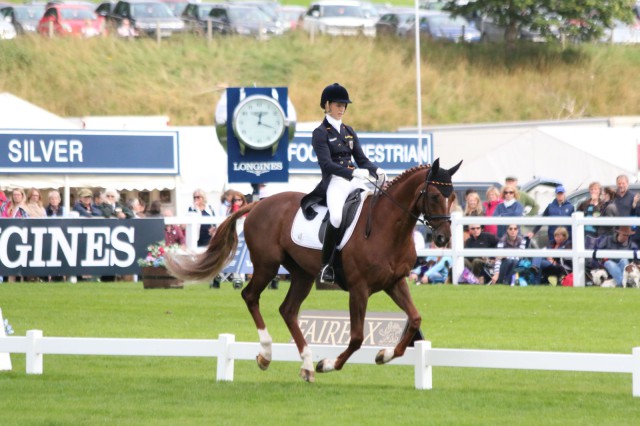 Germany have taken over the lead at the lunch break of the second and final day of dressage here at the FEI Longines European Championships at Blair after a beautiful test by reigning World Champions Sandra Auffarth and Opgun Louvo. Sandra is such a soft and sympathetic rider, and Opgun Louvo’s frame barely changes; he seems to have such a lovely disposition with his ears pricked the entire test, responding to Sandra’s invisible aids, and yet he shows such distinction between each movement and transition.

It was a real joy to watch and a demonstration of what a top class test should look like. Naturally Sandra was pleased with her and her horse’s performance; she said it doesn’t make her nervous when she’s introduced as World Champion before she enters the arena, rather it gives her a little extra boost.

“I am very very pleased with my horse, he was perfect, I could enjoy the dressage test — he was relaxed but really in a good way intense so he had lots of expression so he was nice to ride! I was absolutely not nervous and it’s always a nice feeling to hear that I am double World Champion from the commentator, I thought ‘Oh that’s me!’ I think it’s a good cross country course for my horse, I’m looking forward to it but I think we have to concentrate from the start to the finish and then we will see! I enjoy being part of this brilliant team, it’s a really good feeling.” 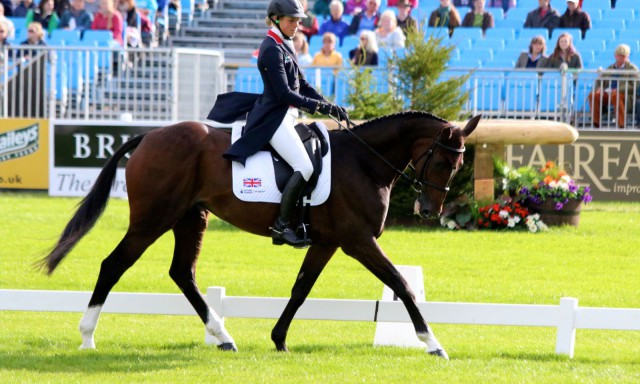 Izzy Taylor remembers doing her very first three-day event at Blair “way back in the day,” and is glad to be sitting on the experienced KBIS Briarlands Matilda; with rain forecast for tomorrow she echoes many of the riders’ sentiments that it’s not the size of the jumps that matters, but rather the placement and the terrain, and the fact that both Izzy and her mare have plenty of hunting in their background is bound to stand them in good stead. First in this morning they performed a balanced, mistake free test to score a solid 44.

“I’m very pleased with her, she was a good girl and kept a lid on it, I just would have liked to have been a bit closer to the leaders but she was good. Maybe I didn’t ask enough, maybe I was a bit conservative. It looks like a good track out there; it’s not as dimensionally big as a lot of us were expecting from Ian but it’s at Blair with the terrain and he’s been very clever with his placement of fences, especially tricky towards the end so I think it will be a very exciting day.

“We all knew coming to Blair that it was going to be hilly, we didn’t know quite what to expect and Ian’s really made the most of what he’s got which is great. Matilda is a four star horse who’s done a few four stars so I haven’t had to change her routine, she’s got a good base of fitness but some of the others with the younger horses have slightly altered things to try and help with the hills.

“It’s very special to be on a home nation European Championship Squad, and it’s quite different to the experience I had in Malmo where it was just six of us, and there were relatively very few of us other Brits and surrounding people; here it feels like everyone is a Brit which is great and it’s like a home event so there’s different pressures and it’s more relaxed in other ways.” 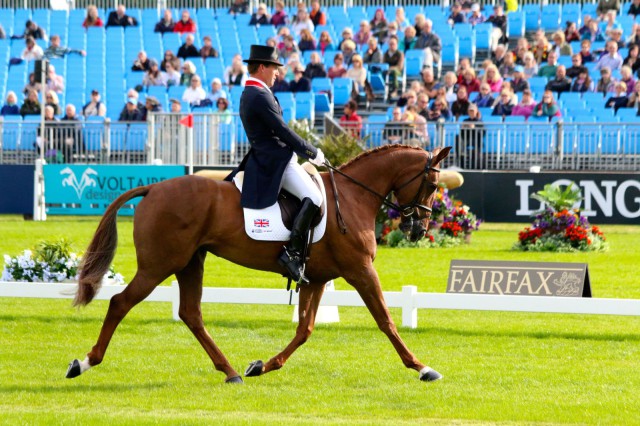 Team GBR, who haven’t lost a home European Championships for many years, are certainly laying down the gauntlet in the first phase with several of the riders recording personal bests so far. Oliver Townend didn’t disappoint either on Fenya’s Elegance, the chestnut mare he’s only been riding a few months, managing to show off her scope whilst not letting her curl up and get too tight. Delighted at the end of his test, Oliver took off his top hat and acknowledged the loud applause, and let the mare stand and graze outside the arena while he waited for his scores. He played it just right this morning.

“I haven’t got the ride on her because everything’s been going swimmingly before, have I? So obviously you’re going into a bit of an unknown quantity and you can manage it as much as you possibly can but at the same time they’re horses so you can’t change the world that quickly so there’s still room for improvement, but she’s never been in the 30s before, and with that we’ll be thrilled.

“I think the cross country is very, very serious for every horse. The terrain is tough and we’ve forecast rain which will change the whole competition. The jumps are not dimensionally massive but I think it’s a really tricky course, and if horses and riders get mentally tired from the hills and the constant questions, that’s when mistakes will creep in.

“Blair is a fabulous event — full stop; I always used to love coming here. I’ve not been here for a couple of years. and now it’s a European Championships. I think they’ve done an unbelievable job; it has a special feel about it. I think the arena looks absolutely amazing; the stands are very, very impressive, and it really does feel like a special occasion, and it’s great that we’re in front of a home crowd.”

Gwendolen Fer and her leggy, elegant Romantic Love came out later in the morning and did another nice test to move up into the top 12 for France. The European Championships are especially important for France, Sweden, Italy, Switzerland, Russia, Spain and Belgium, as this is the last chance for them to qualify as teams for the Olympics next year. Great Britain, The Netherlands, Germany and Ireland are already qualified, and there are two slots up for grabs at this year’s European Championships; these two slots will be given to the two highest placed teams not already qualified. 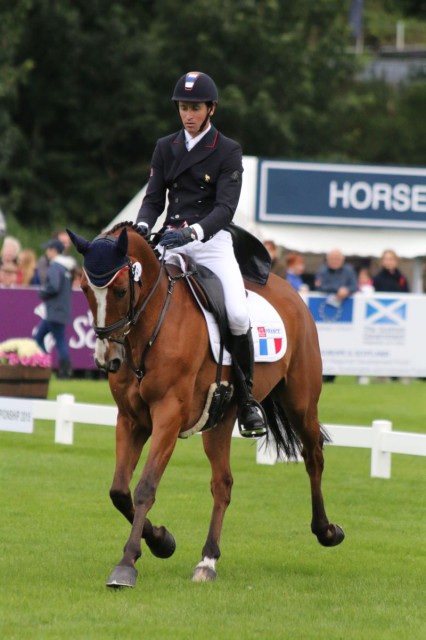 Thomas Carlile also boosted French hopes this morning with a nice test on the promising 9-year-old Sirocco Du Gers, moving into 17th place on a sore of 43.2. Thomas broke Sirocco Du Gers in as a 3 year old for his owner Scea De Beliard, and he said he’s always been his favourite.

“He’s got such a good attitude and he always gives his best and wants to win. To be only 9 and at his first Senior Championships and on the team shows how much esteem the country has for the horse. I rate him a lot and hopefully tomorrow will be a good day for him.”

This lovely big young horse won the Young Horse Championships in Le Lion D’Angers in 2013 and the Nations Cup CCIO3* in Boekelo last year and has been campaigning on the French national circuit this year with the Europeans in mind, and qualification for Rio next year is the priority.

“Sirocco is a very young horse and this is his first senior Championship and his attitude was very good; he was very serious throughout, I don’t know if it will be good enough for an individual medal shout but it should be good enough for the team. We’ve come here to qualify after the blip at the WEG last year; I think we stand a good chance of getting a qualification and then getting a team medal would be the cherry on the cake.

“There are some serious hills out there, the terrain is going to play a lot on the stamina and speed and fitness of the horses. The fences all seem very clear; it’s big, it’s sharp, you need bold riding, but you definitely need fit horses to get round the course. Throughout the season we all train our horses individually. We’ve had the two-week training camp that(French Chef D’equipe) Thierry Touzaint  has always organised since he’s been the French selector back in the early 90s. He’s always trained the team the same way on the beach in Normandy, so our horses are super fit so we don’t have much doubt about that.

“Sirocco is an immensely genuine horse. He’s a horse who never lets go of his bridle; he’s always on the bridle. He’s got plenty of blood; he probably wouldn’t be the fastest of the horses, he does always carry a bit too much weight but that’s him, he keeps his tank up for the end of the course. He’s definitely an out and out stayer, and he’s always pretty good the next day.”

Thomas, who lives in France but funnily enough has a strong Mancunian accent, wouldn’t mind the forecast rain tomorrow — as he says, his horse has plenty of blood on the dam’s side — but is mindful that the French team need to complete first and foremost. “The priority is definitely to qualify the team, so if it does get choppy, we’re going to ride safe to get the team around; it doesn’t take much, it just takes a fall and an unsound horse the next day, so we’re going to play safe tomorrow and see how it goes.”

Thomas has ridden round Bramham before but otherwise doesn’t have much experience with Ian Stark’s cross country, but the French team have been taking advice from their compatriot and team member Nicholas Touzaint. “The skinnies aren’t that skinny, but the tables are big and there’s not much of a ground line — the gates are pretty dry. The real technique in his courses is good management of the horse’s fuel tank, and also he uses the terrain so much that any little unbalance caused by fatigue by the terrain is going to lose your quality of jump which is what you’ve got to keep throughout.”

Best of luck to the French and all the teams seeking qualification this weekend, but before we tackle tomorrow we have another full session of dressage this afternoon, including, of course, the anchors for the team — did you mention Rolex Kentucky winner William Fox-Pitt and Bay My Hero?! Ingrid Klimke and Horseware Hale Bob? More to come from the Longines FEI European Championships at Blair Castle, until then thanks for making Eventing Nation part of your day, and Go Eventing!