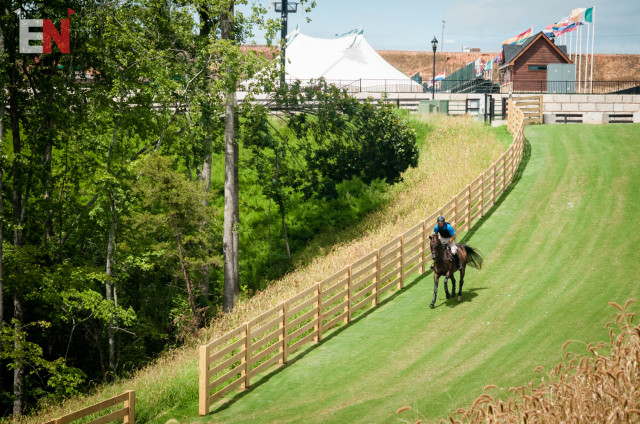 Eric Dierks and Magical Monte set out on course at TIEC. Photo by Leslie Threlkeld.

The USEA American Eventing Championship is coming up in two weeks time, and hundreds of America’s top riders at all levels will converge on Mill Spring, North Carolina to compete at the world-class Tryon International Equestrian Center (TIEC).

Bringing the AEC back to the East Coast was a popular choice, and if the entries are any indication, riders are excited to compete at the expansive facility.

Hosting the AEC at TIEC has not come without reservations, however. There was no cross country course to speak of when the announcements were made and the venue has been undergoing major construction ever since.

When the Pony Club Championships rolled around last month, we all expected to see the first horses galloping out on the newly built cross country. The Beginner Novice through Preliminary courses, however, were confined to a Derby Field and two adjacent arenas and the rumors that the real cross country course would not be ready for AEC spread with renewed vigor.

It just so happens that I live less than an hour from TIEC, so I decided to go see for myself. Having driven by the resort a number of times this year I, too, have become increasingly skeptical as progress seemed slow. There was no clear indication where the course would actually go and not a blade of grass was yet growing.

But before I dive into the details. I will tell you what you really want to know, which is the course WILL be ready in two weeks. There is still quite a bit of construction happening around it, but the cross country track itself, green and gorgeous, is ready for horses to run and jump.

Mark Bellissimo himself greeted me at TIEC this Thursday and we hopped on an ATV to take a look around the venue. “We’re very excited about the AEC,” said Mark, Managing Partner of Tryon Equestrian Partners. “It’s a big part of everyone’s schedule for the year and we want to make sure everyone walks away with a good experience.”

We began at the Derby Field, which includes a bank and water complex. The Derby Field will be incorporated on course for all levels, but Mark insisted that the lower levels would not be confined to this area. “The Beginner Novice and Novice courses will include the Derby Field and (sand) arenas, but they will do a much more typical cross country course, go outside the arenas and use the various elevations,” Mark said.

The Pony Club Championship courses, Mark said, were deliberately designed in collaboration with Pony Club management as a self contained course. As a result, the biggest uncertainty was that the rest of the course was not ready for AEC.

I spoke with course designer Captain Mark Phillips this morning and he confirmed that all levels will run through the Derby Field as well as out in the country. He also said that the Beginner Novice and Novice ran quite well at Pony Club Championships but that the confined space was less than ideal for Preliminary.

At AEC, Captain Mark Phillips said the Beginner Novice will follow the same track as Novice and Training, but the amount of jumping efforts placed out in the country will vary based on the width of the track and maximum required lengths of course for each level. 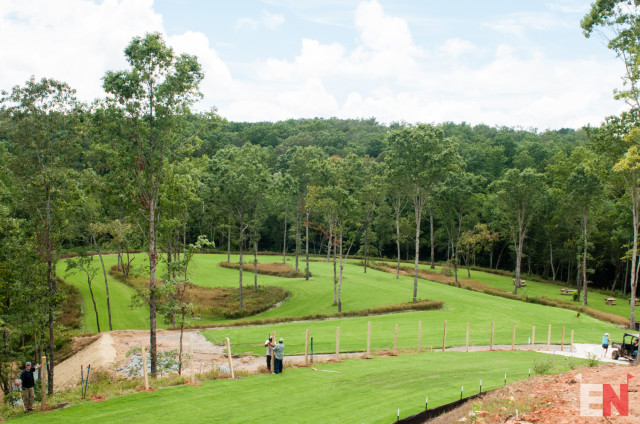 The view of “The Glades” from a spectator’s walking path. Photo by Leslie Threlkeld.

Of course for eventers, running and jumping on good footing is of the utmost importance and TIEC has famously developed its footing on cross country by stacking synthetic materials, fiber, felt and a soil mix.

Eventer Eric Dierks is based down the road from TIEC and has participated in several of the dressage and jumper shows there. With a number of his event horses aimed at AEC, he was pleased to be invited to test ride the track himself.

Stepping out on the track at TIEC, Eric said he expected the manufactured footing to be spongy, but that wasn’t the case. His gallop began tentatively and as he got more confident in the footing under his horse’s hooves, he kicked it up several notches, testing the inside turns and galloping up to 600 meters per minute in some places.

Eric reported to EN that the footing was firm but not hard and although the grass is short, it is thick and absorbs the horse’s foot falls without digging up the base. Considering the amount of rain we’ve had in the area this past week, he was pleased also that his horse did not slip on slick ground.

“The footing holds. It’s safe and you can gallop strong on it without feeling like you’re going to get (suspensory injuries) on soft footing and concussion on hard footing,” Eric said. “If that’s the representation that is going to be on the course, I have full faith that the AEC is going to run really quite well.”

Check out this drone video of Eric and Magical Monte on course at TIEC:

Mark Bellissimo has become known for his ability to create an inclusive spectator experience at his events, and the AEC will be no different. High above the cross country track, construction crews are hard at work building viewing areas for spectators.

Mark explained that there will be four to five hospitality tents set up around the course that will be open to the public. These tents will be connected by walking paths so that spectators can walk the length of the course and look down on the galloping horses and riders. “We want to make the sport more accessible and interesting,” Mark said.

And yet, I see this feature as a clever mode of safety. It’s always a heartstopping moment at any horse trials when a spectator ducks under a rope in the path of a horse or crosses the track without listening for hoofbeats. Designated viewing areas and walking paths will keep the spectators safely out of the way and allow the riders to really focus on the course in front of them. 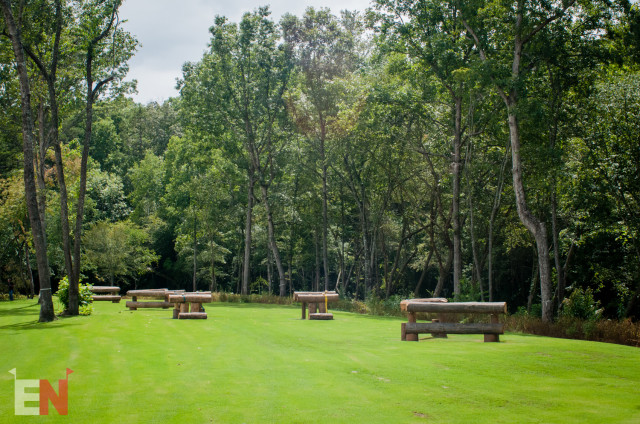 There is work yet to be done. Barriers and fencing are under construction around the course, and the edges of the track where grass meets dirt will need to be cleaned up. Construction is ongoing on either side of the water complex and the location of the warm-up and start box has yet to be decided based on feedback from the Pony Club Championships.

Additional parking and a second entrance to the resort are in the process of being built. Plans for expanding the venue are on the table, too, like increasing the size of the Derby Field and incorporating the nearby, recently purchased golf course.

As they say, world-class international equestrian resorts aren’t built in a day, but Mark Bellissimo somehow manages to get it done fairly quickly. I think we’re in for a real treat at the 2016 AEC, but 2017 will be when we really see this place bloom. 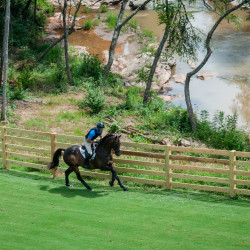 Eric Dierks and Magical Monte gallop by the river at TIEC. Photo by Leslie Threlkeld. 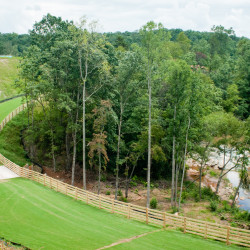 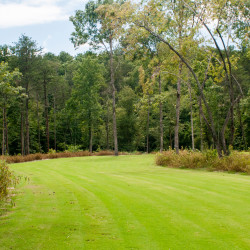 A section of “The Glades.” Photo by Leslie Threlkeld. 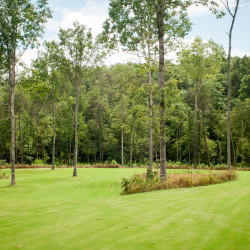 Another view of “The Glades.” Photo by Leslie Threlkeld. 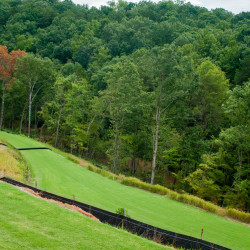 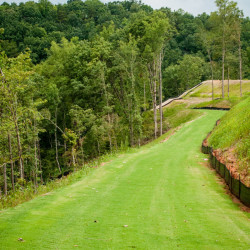 A long uphill pull near the end of the course. Photo by Leslie Threlkeld. 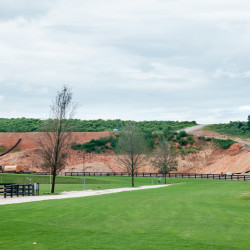 Returning to the Derby Field. Photo by Leslie Threlkeld. 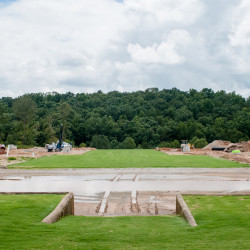 One of two water complexes. Photo by Leslie Threlkeld. 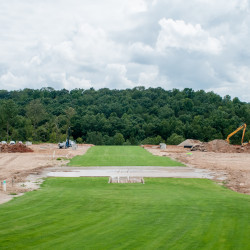