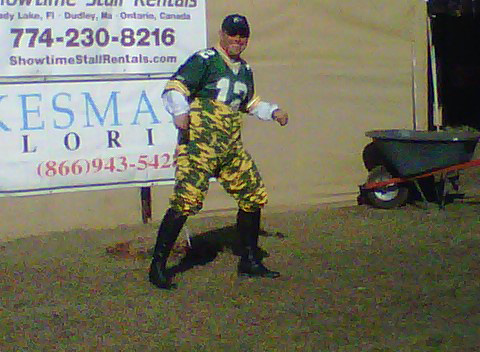 I’d like to wish a big EN ‘get well soon’ to our good friend Buck Davidson, who fell off a horse and broke his collar bone this morning in Ocala, FL.  I spoke with Buck and he told me that the collar bone is completely shattered.  The horse reared up, hit Buck in the face with its head and Buck tumbled to the ground.

Buck will have surgery this coming Monday in Nashville, Tennessee at Dr. Craig Farrell’s clinic.  Dr. Farrell serves the US Eventing Team’s riders, and does a great job of finding the balance between what injured riders need to do to heal and what they need to do to keep their season on track.  Dr. Farrell is out of town on vacation this week but Buck said he is well worth the wait.  I asked Buck how much time he would have to take off and he said “they say 6-8 weeks, but you know…”

As I was speaking with Buck, his father Bruce was riding one of his horses and his girlfriend Andrea Leatherman was riding another.  Buck told me that between Bruce, Andrea, his team of students, and Sharon White (who is staying at Buck’s farm) he will have more than enough support to keep his horses going.  Buck mentioned that he is particularly frustrated because his horses have been going so well this year.  He said “Reggie has been coming back great from his [tie back] surgery, The Apprentice has been fantastic at the training sessions, and Libby [Absolute Liberty] is going great right now as well.”

Hopefully, Buck will have just enough time to get back in action before The Fork (Apr 5-8) and, knowing Buck, I don’t see this having a big impact on his Olympic pursuit.  Buck said that his collar bone hurts like heck right now, but Buck is one of the toughest eventers I know.  Whether it is getting trampled in a fall at Morven and riding the rest of his horses on one leg or finishing two minutes of the Pan American Games course with one stirrup, he never ceases to get the job done when he needs to.

In an unrelated purely editorial comment, maybe the time off will give Buck the time to make a much overdue proposal to Andrea, that everyone in the eventing world is rooting for.  Go Buck.