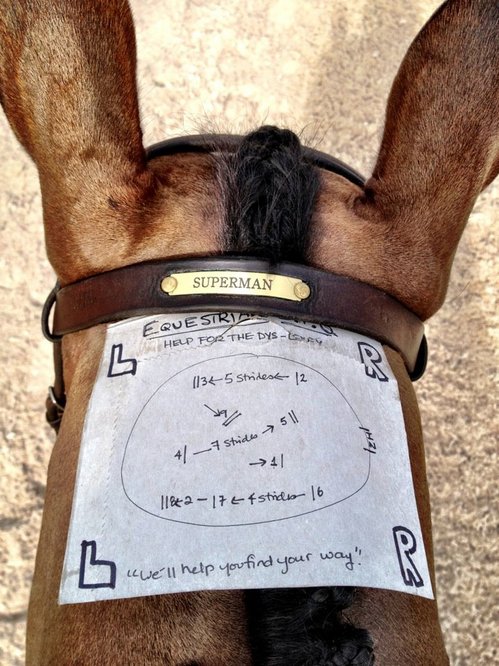 If only this really worked! (Photo Courtesy of makolane)

Good Morning EN Readers! It’s Friday! Let’s all cheer in celebration for another long week nearly over! Somedays I feel like I need Pony GPS (pictured above) just to get through my riding, my mind has been so scrambled by the pressures of everyday life. Fortunately, my sweet horses take pity on me during those days. Nothing proves to be a better detox than some quality time with your horsey friends!

My fellow internet bloggers appear to agree, as today’s News and Notes are peppered with quality entries about focusing on riding and gearing up for competition!

But the news isn’t only interviews and blogging today! We’ve also got some exciting announcements!

Eventing will be holding its first FEI Nations Cup series, in hopes of attracting top rides from around Europe. The three-star series debuts in Fontainebleau, France on March 22nd! [Horse and Country] [Chronicle of the Horse] [British Eventing]

Erin Gilmore reports on helmet maker Charles Owen announcing their decision to stop producing and selling unapproved hunt caps as of January 2012. Dover Saddlery has also been influenced, changing the way they market hunt caps from being classified as “helmets.” These items are now listed as “hats,” along with Top Hats. [Riders4Helmets]

According to Horse talk, five cities from around the world have officially submitted their bid to host the 2020 Olympics. The International Olympic Committee has received applications from Istanbul, Tokyo, Baku, Doha, and Madrid. [Horsetalk]

Horse & Hound reports on a new phone app designed for Horsebox drivers, called “Rescue App.” This app, available on iphone, Andriod, or Blackberry, provides a pay-on-use horsebox breakdown service. The app was created by PRP Breakdown Services, whom will come to the driver’s aid in case of an emergency. [Horse & Hound]

A service of thanksgiving for the life of Josh Gifford is to be held at Chichester Cathedral on Thursday, March 1st.  The memorial will be held at 2pm, and all are welcome to attend. [Horse & Hound]

Riders4Helmets has posted a Helmet Cam Alert on a fantastic new video of Christoffer Forsberg winning the VR Classics 2012, Neumuenster. While not as stable as some of the better known eventing helmet cam videos, it still features a great ride over a challenging course! [Riders4Helmets]

The Eventing Radio Show continues its tour of Ocala, interviewing Eventers Leslie Law, Betsy Watkins, Jessica Pheonix, and Gretchen Butts.  The Episode can be downloaded as a podcast on iTunes or can be listened to right on the website! [Eventing Radio]