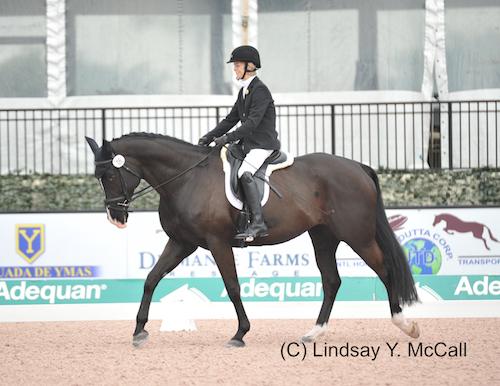 As the saying goes: When you fall off the horse, you have to get back on again. Eventers know this well, and perhaps Margaret “Gigi” McIntosh knows this best of all. Gigi has been knocked down — both figuratively and literally — many times, but each time she returns with more determination than ever. Now this former eventer turned para-dressage rider is headed to the 2016 Paralympic Games in Rio de Janeiro.

Gigi began riding at six years old and as a high schooler spent her summers as a working student for May and Denny Emerson. She later managed the dressage barn of Gunnar Ostergaard and Ellin Dixon after graduating college, and eventually her equestrian pursuits led her to Germany, where she apprenticed for legendary dressage riders George and Inge Theodorescu and their daughter Monica.

Gigi met her husband, Brian, while on an African safari, and in 1983 the couple married and returned to the States where they later had two children and Gigi started competing in eventing.

In 1987 Gigi began working with Bruce Davidson Sr. and continued training with him for over a decade. Though she was included in the Developing Rider program in 1996 and 1997 and rode alongside members of World Championship and Olympic teams on a daily basis, Gigi says her aspirations were never really aimed at an event as prestigious and selective as the Olympics.

“I knew very well that I was just an amateur,” Gigi said. “Riding in the big four-star three-day events seemed a distant but more attainable goal, especially since I had two really nice Thoroughbreds competing at the Advanced level along with Bruce’s help.”

The culmination of Gigi’s eventing career came in 1998 as she completed the very first CCI4* at Rolex Kentucky with her own Flashy Turn. “I finished that event so sure that it was just the first of many, I didn’t even buy the video!” Gigi said. But it was a spring day in 1999 at Morven Park that would change the rest of her life.

Gigi broke her C-6 vertebrae in a fall over an Intermediate fence and was instantly paralyzed from her chest down, she was ultimately diagnosed with incomplete quadriplegia. Many with the same diagnosis would be relegated to a wheelchair for life, but not Gigi. With a determination to get stronger, Gigi quickly progressed through physical therapy and laid the groundwork for getting back in the saddle, though she had no notions of ever competing again.

“Having been totally preoccupied with my horses for the previous 10 years, I faced a void after my accident,” Gigi said. “I was lost without the daily relationship with a horse.”

Six months after her accident, Gigi was back in the saddle. With the help of fellow eventer Jane Cory, Gigi began a hippotherapy program at the Cort Center for Therapeutic Riding at Pleasant Hollow Farm in Pleasant Valley, Pennsylvania. It was enough to satisfy her itch to ride again, yet conservative and safe enough to keep her husband satisfied. “Nothing is as much fun as going cross country, but I was so lucky to be able to enjoy riding at all,” Gigi said.

Gigi continued to work hard both in and out of the saddle to test her her body’s new capabilities. Shortly after her physical therapy ended, she started to frequent a local able-bodied gym where she could use the controlled movements of the weight machines to build muscle and strength. She also re-learned how to swim though actuation therapy and was able to join spinning classes as well. 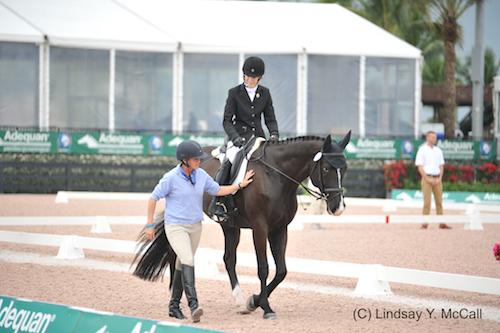 As Gigi continued her hippotherapy program for several years, her hunger to compete returned. Her good friend Jan Smith, a long-time supporter of eventing and owner for the Davidson family, saw Gigi’s determination to compete again and gifted her with the ultimate present in Idalgo.

Known as “Hobbs” around the barn, Idalgo was a retired four-star mount of Buck Davidson’s with a gentle disposition. Hobbs and Gigi immediately formed a bond, and the Selle Francais gelding took to his second career as a para-dressage mount as kindly and naturally as could be.

Jane recommended that Gigi train with Missy Ransehousen, the coach of the U.S. Para-Equestrian Team at the time. Gigi and Hobbs started the next chapter of their journey by moving to Blue Hill Farm, which offers training from Missy, a Pan American Games silver medalist in eventing, and Jessica, a three-time Olympian in dressage. Able-bodied and para-equestrians train alongside each other on a daily basis at Blue Hill.

With a coach to guide them, Gigi and Hobbs were suddenly in the the pipeline to qualify for the 2012 Paralympics in London. “At last, I was back in a program of short term goals leading to meaningful accomplishments,” Gigi said.

Training under Missy and riding at Blue Hill Farm helped to transform the way Gigi viewed her new riding abilities. “As I spent more time at Blue Hill Farm, I found the para riders to be serious competitors, assiduously training with Missy and Jessica in order to meet their international goals,” Gigi said.

“It took 10 years for me to realize that the muscles in my legs would never be strong enough to overcome my spasticity and that if I wanted to compete, I would need the adaptive accommodations of the para-dressage regulations.”

Para-Dressage competitors are permitted to use adaptive equipment to compensate for a lack of physical or sensory limitation, as opposed to a training aid for the horse or a means of compensating for a lack of skill.

Gigi’s approved modifications include special loops in the reins to compensate for grip strength in her hands and a tether that secures her feet in the stirrups near the girth in order to control the spasticity in her legs. With these accommodations, Gigi went from struggling to canter — her right leg would fly straight out from the horse — to riding canter half-passes again.

In FEI competition, para-equestrian riders are assigned grades based on their functional ability, including mobility, strength and and coordination, with Grade IV being the least severely impaired and Grade 1a being the most severely impaired. This classification system allows for meaningful competition between riders of the same grade.

Gigi was classified as 1b, which rides tests equivalent to USDF Training Level and with 60 percent of the test scored at a walk. Knowing that Hobbs did not have the type of walk to be competitive at the London 2012 U.S. Selection Trials, Gigi borrowed a mount and unfortunately missed making the team by 0.01%. 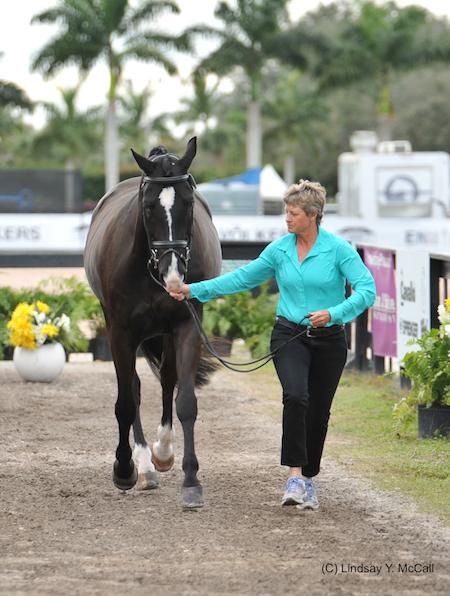 With that disappointment behind them, Gigi and Missy set their sights on the 2014 World Equestrian Games and ultimately the 2016 Paralympic Games, but to be successful they knew Gigi would need a special horse with a world-class walk. Their search for a new mount ultimately culminated in the fall of 2013 with the purchase of Rio Rio, a very aptly named Rheinlander mare.

To a casual observer, it may seem that a para-equestrian dressage test is a proverbial walk in the park, but that’s not the case at all. Missy explains: “The walk is the hardest gait in any test. You have to have the same stride and the same connection throughout the test. For able-bodied riders, we can add a little trot and canter to jazz the horse up and rebuild the connection, but to just walk for five minutes straight in a test is really hard.”

A horse with a very clear walk stride, which Rio Rio has, helps to maximize scores. Rio Rio also thrives in the big competition settings; since she is a quiet horse by nature, the atmosphere helps her shine. In addition to Gigi practicing her tests a few days a week, Missy also rides Rio Rio, showing her at Third and Fourth levels to keep her fit and interested in the work.

In the spring of 2014, Gigi and Rebecca Hart, a fellow Blue Hill Farm para-equestrian, took their mounts to Europe to get some mileage before the World Equestrian Games Selection Trials. Everything seemed to be falling into place, but just prior to their second competition in Belgium, Gigi began experiencing excruciating pain while trotting. The pain led to a request to reclassify Gigi’s grade to 1a, which is walk only.

The European classifiers granted the request and assured Missy and Gigi that her new classification status was confirmed. However, when Gigi arrived at the WEG Selection Trials in Gladstone, New Jersey, two months later, she was asked to submit medical documentation to the FEI supporting her re-classification.

Gigi scrambled to hand in what documentation she had before the end of the competition, but it was not enough, and she was forced to forfeit her spot on the 2014 WEG team as a result. An MRI later that year provided Gigi with a diagnosis of scoliosis, stenosis and atherosclerosis, which cemented her 1a reclassification.

Not making the 2014 WEG team was particularly disappointing, as the ultimate result was out of Gigi and Missy’s hands. “I could only hope the issue would be resolved in my favor,” Gigi said.

Missy recalls: “It was a huge communication issue between the U.S. and European classifiers. Had we known prior to the Selection Trials that the reclassification had not actually been confirmed, we would have had time to get the right paperwork in order.” 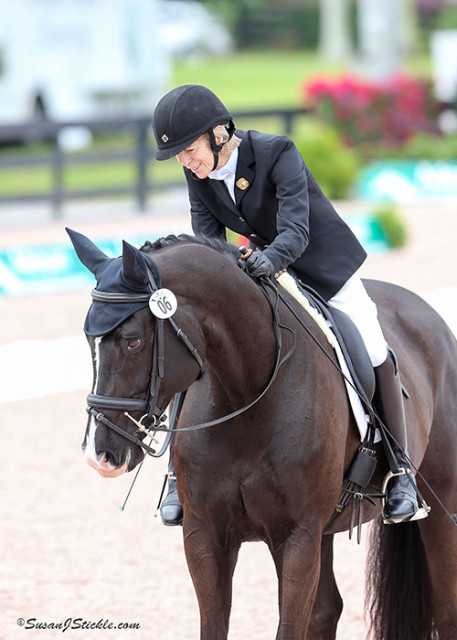 Gigi has a knack for looking ahead no matter what hardships come her way, and she and her team put the disappointment behind them once again to set their sights on Rio de Janeiro in 2016. Looking back, Missy thinks that missing WEG could have been a blessing in disguise: “It only gets better with time with these horses, and Gigi had only been on Rio Rio for six months at this point. They have a much stronger connection now and are both so much more ready.”

Gigi and Rio Rio demonstrated their connection and preparation at the U.S. Selection Trials for the 2016 Paralympic Games, which took place in Grass Lake, Michigan earlier this year. They won the Grade 1a Freestyle and the Grade 1a Championship, taking sixth place overall. Scores from that weekend were averaged with scores from international competitions throughout the season to determine the 2016 U.S. Paralympic squad.

Gigi had finally made it.

“I still cannot quite believe it!” Gigi said. “It has taken my whole life to get this far. Despite every setback, Missy has been as committed as I have over the past five years. She and her mother, Jessica, have invested countless hours in Rio Rio and myself in pursuit of this goal. Their support and that of my friends and family has been invaluable.”

The U.S. Paralympic Team also consists of Sydney Collier, Rebecca Hart and Annie Peavy, all of whom are some of Gigi’s best para-equestrian friends. “I am very excited to be on the Paralympic Team for this adventure in Rio with them,” she said.

Gigi’s story shows how a positive attitude and “get back on the horse” mentality can carry a person through difficult times and ultimately lead to new heights. “Gigi has always had a determination her whole life to be the best she can,” Missy said. “Her personality is very driving, but in a kind way. She is always conscientious and respectful about what it takes to make it happen for her.”

When asked if she has any advice for someone who feels like the odds are stacked against them, Gigi said: “The voice inside your head is the most important one! Very early on in my recovery, I resolved to stay positive.”

“Never ever give up!”