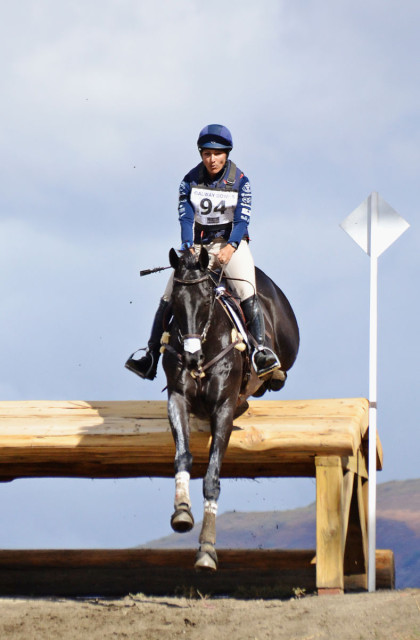 It’s been almost nine years since Gina Miles was last seen galloping around Rolex aboard McKinlaigh, who was inducted into the USEA Hall of Fame last week. Fans of this pair will remember the impressive liver chestnut Irish Sport Horse gelding making mincemeat out of top courses all over the world, including the 2008 Olympic Games.

Gina and McKinlaigh capped off a storied career together by winning the individual silver medal at the Beijing Games, and she’s been searching for the right horse to return to the top levels ever since retiring McKinlaigh.

“(McKinlaigh) is nearly irreplaceable,” Gina said. “After retiring him, the search was on to find another horse to take to that level. Trying to find a horse like him is very hard. I found a mare in Denmark named Chanel and competed her for awhile, but she got injured, and I didn’t really have the money to go and find another horse at the time.”

“The tough part about stepping away from the Advanced level is that you want to stay sharp,” she said. “You want to stay current and not lose your feel. The longer you’re away, the more that begins to ebb away.”

Enter S.V.R Ron, who had loads of international experience competing with Uruguay’s Frederico Daners to the three-star level. The 15-year-old Uruguayan Sport Horse gelding also competed at the 2011 Pan American Games in Guadalajara, where he placed 17th individually. Bred in Uruguay, Ron is classically Thoroughbred in his bloodlines and was bred as part of the Uruguay military remount program.

“Ron had been with Frederico in Tamie Smith’s program, and Frederico had decided to focus on show jumping, so the horse was for sale,” Gina said. “His dressage and show jumping weren’t amazing, but he was a very genuine and solid horse. We went and tried him, and we were able to scrape together the money with the intent that he would be a good fit for me to keep going at those levels.”

Gina took over the ride on Ron in 2012, finishing second in the Open Intermediate at Copper Meadows in their first competition together. Due to the revised qualification criteria for the FEI divisions, Gina had to campaign the horse at the two-star level before she could step him back up to three-star competitions.

“The first year I had him, we did a CCI2* (at Galway Downs) where he went double clear on cross country and had his first double clear show jumping round,” Gina said.

“I’d planned to take him to Rolex the next year, but the new qualifications made that not possible. We had to drop back to the two-star level and do a lot more than we would normally have wanted to on an older horse who already had extensive experience. He was ready to step right back to the Advanced level, but we couldn’t.”

Gina put her head down and kept working, though, determined to make the most of her delay in plans. She brought Ron to Jersey Fresh in 2014, where they ended up retiring on cross country in the CCI3*.

“We didn’t feel amazing jumping around,” she recalled. “I went around thinking that maybe this was his last three-star, that it was his way of telling me he was done. I thought maybe he was ready to slow down and retire and maybe do some Young Riders.“

Coming home from New Jersey, Gina’s trailer was involved in an accident with Ron onboard. While everyone involved was OK, the trailer was totaled, and Ron suffered a lot of soreness from the incident.

“He was just kind of a wreck after that,” Gina explained. “He was very body sore, so we gave him the rest of the summer to rest and recuperate. The vet’s prognosis was that we’d just have to wait and see what he felt like when he came back to work, that we wouldn’t really know how the accident affected him until then.”

But Ron came back stronger than ever, prompting Gina to revisit her plans of campaigning him at the three- and, possibly, four-star level. “By the time he came back at Galway that fall, he felt amazing,” she said. “He was jumping everything incredibly and making the tough combinations feel easy. At that point, I thought that he had Rolex in him, and it became a very realistic goal for us.“

Knowing what it takes to successfully compete at the four-star level, Gina is aware that this will be a big challenge for both her and Ron.

“What’s hard about going from a three-star to a four-star is that there’s no let-up,” she said. “Each fence is max height, and every question is difficult and requires focus. That’s where the heart and drive come in — not only do they get physically tired, but they get mentally tired. They have to be able to handle the pressure.“

“My horse is like McKinlaigh in the kind of heart he has. The work ethic and heart he brings every day are what makes event horses so special. I feel very confident in him, and it’s my job to give him a good ride.“

Gina works with Sandy Phillips for her dressage, which has been a work in progress with Ron. “We’ve really changed his shape and muscle, and it’s been chipping away. He’s now scoring in the mid to low 50s, where he used to be scoring in the mid to high 60s. Now I feel like we can do something respectable in the dressage and not something laughable!”

As she prepares for her much anticipated return to Rolex, Gina admits that she’ll be feeling some nerves come Saturday. “I’m sure I’m going to be pretty stinking nervous,” she laughed. “The last few years I’ve been there as a spectator, and it’s a lot easier to walk that course and say that it looks doable when you aren’t riding!

“But I’ve had a lot of practice dealing with nerves and anxiety, so I’ll be putting that to use since we go late in the order, and waiting around all day on Saturday is just torturous. I just have to exercise the best mental control I can and keep it together.”

S.V.R. Ron is owned by the S.V.R. Ron Syndicate, LLC, information on which can be found by visiting Gina’s website here.